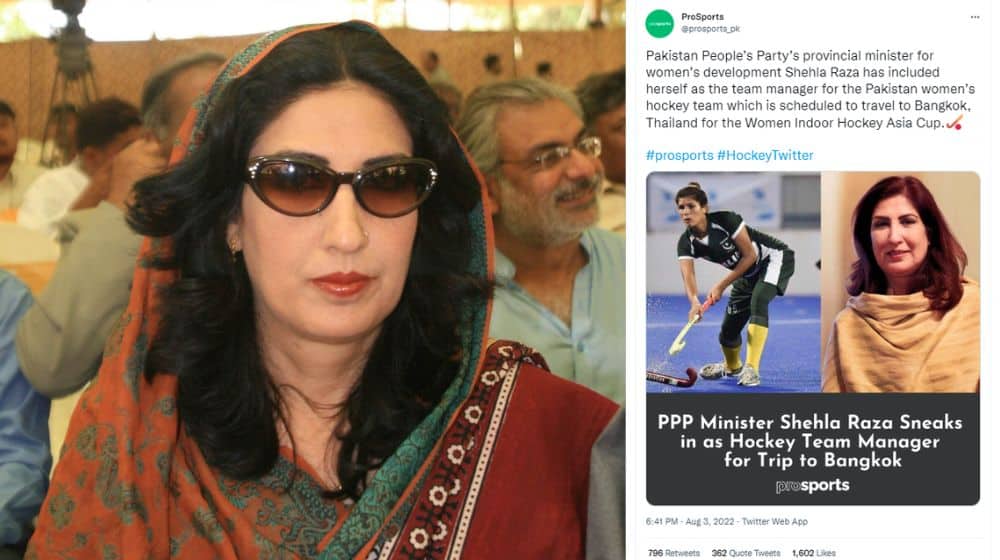 Pakistan People’s Party’s provincial minister for women’s development in Sindh, Syeda Shehla Raza, has responded to ProPakistani’s news regarding her appointment as women’s hockey team manager for their upcoming tour of Bangkok for the 2022 Indoor Hockey Asian Games.

According to details, Shehla, a serving minister, was included as women’s hockey team manager, to which she responded that she was appointed by the Pakistan Hockey Federation itself. She stated that while her name was included, she will not be traveling with the team due to her duties during the Muharram processions.

The provincial minister stated that she and her team have worked really hard to provide the young and aspiring hockey players with the facilities and infrastructure so that the players can be provided with a platform to enhance their skills.

She further stated that she has been associated with Karachi Hockey Association (KHA) over the past four years and has been serving as the chairperson of the Karachi boys hockey team. She added that she has also been appointed as the GM of the Sindh girl’s hockey team.

Shehla further remarked that there have been various instances of politicians going as managers of the Pakistan national teams and such propaganda should not be instigated.

While this whole predicament might not be such a big deal for the politicians, it is a big deal when the sporting industry has been suffering over the last few decades. The whole argument around the situation is that no politician in power should hold office in a sports federation and they should not be a part of any national team due to conflict of interest.

The sports federations should be run by professionals who have a deeper understanding of the sport and who are able to keep their biases aside while appointing people within the federation and selecting the members of the national side.