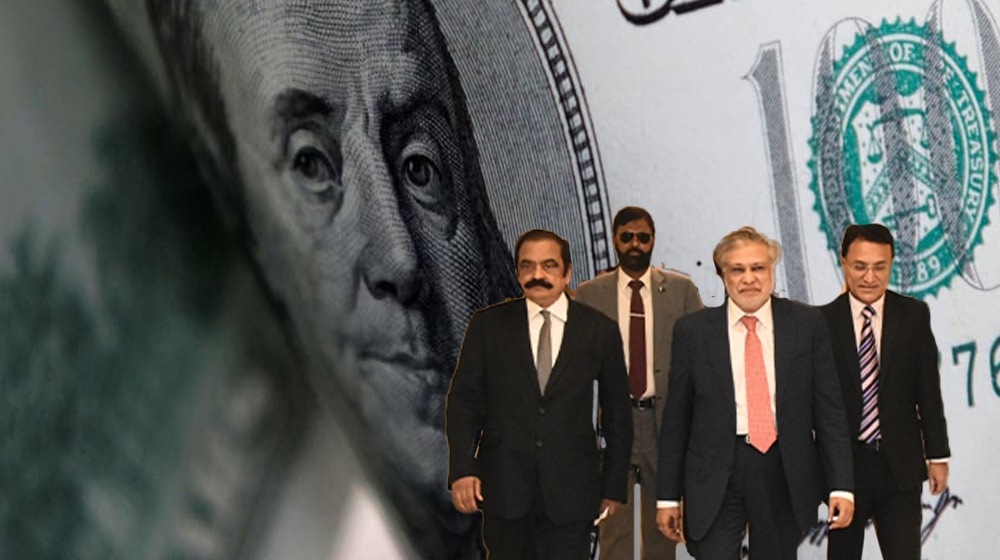 It appreciated by 0.77 percent against the USD and closed at Rs. 232.12 after gaining Rs. 1.78 in the interbank market today. The local unit quoted an intra-day low of Rs. 236.85 against the USD during today’s open market session. 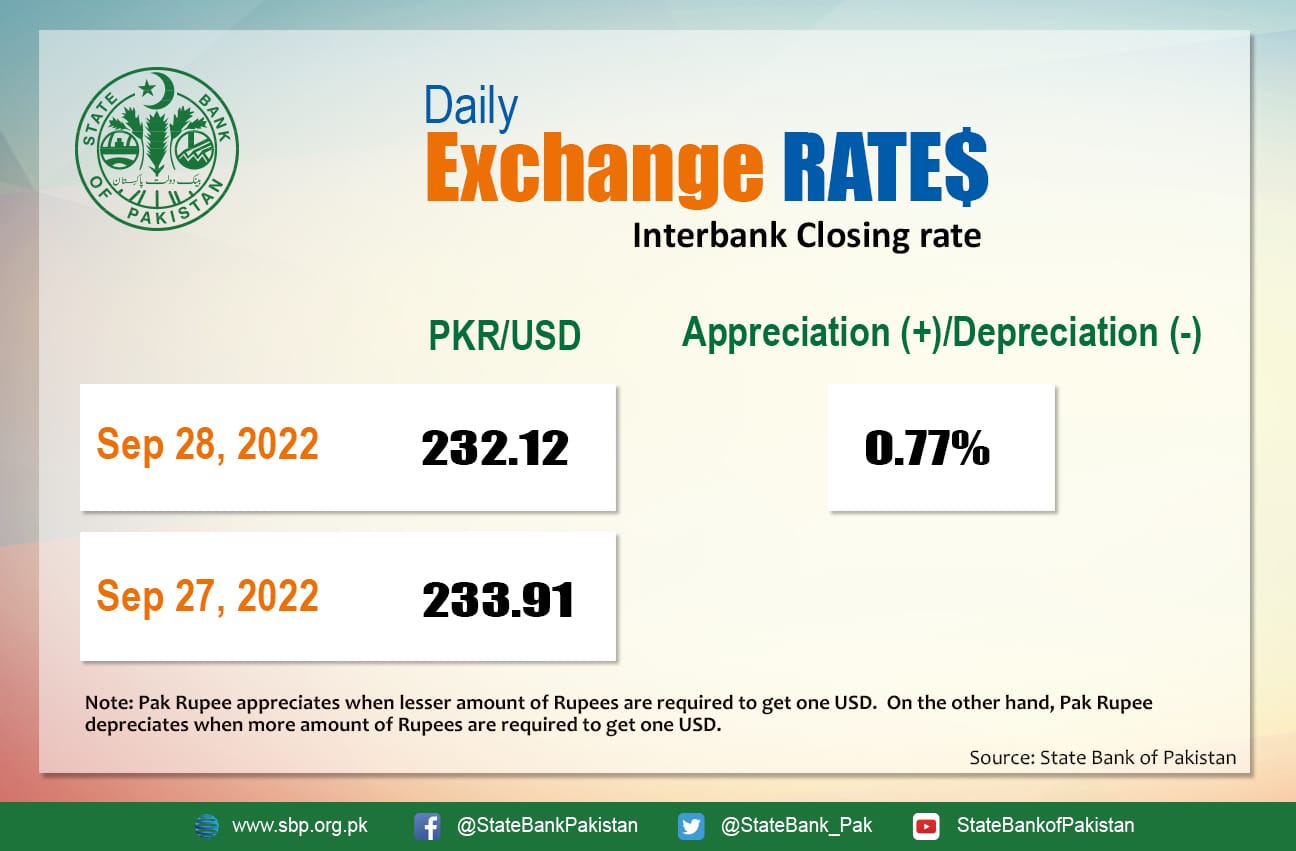 The local unit was bullish from the opening bell and was trading at 236.40 at 10 AM. By midday, the greenback went as low as 236.82 against the rupee. After 2 PM, the local unit stayed at the 230-231 level against the top foreign currency before the interbank close.

The rupee continued its massive run against the dollar for the fourth consecutive day today as Ishaq Dar was officially sworn in as the Finance Minister in Islamabad today. After the ceremony, he promised he will work to reduce inflation and interest rates, calling the rupee currency undervalued and promising a strong response to the South Asian nation’s worst economic crisis.

Bonds fell as much as eight cents to hit fresh lows after Dar’s comments on inflation and interest rates. Short-dated papers suffered the biggest decline with the 2024 bond being bid at 40.2 cents/$. Bonds due in 2025 and 2027 fell just over four cents while the bigger maturities received bids just a little over 36.6 cents.

In his fourth term, the chartered accountant must deal with a balance of payment crisis, foreign reserves that are barely enough to cover a month’s imports, historic lows in the rupee, inflation of more than 27 percent, and the aftermath of devastating floods.

The rupee has been recovering since Friday after falling close to an all-time low of Rs. 239.34 on September 22. In the last four sessions, it has gained Rs. 7.53.

Our channel checks confirmed that there was panic selling in the open market, and exporters who had kept their profits overseas were now bringing them back to Pakistan. This had improved things on the supply side, which was reflected in the interbank market today.

Globally, oil prices were relatively flat on Wednesday, as pressure from a strengthening dollar and increased crude storage was offset by production cuts in the United States caused by Hurricane Ian.

International reports suggest Hurricane Ian shut down approximately 190,000 barrels per day of oil production in the Gulf of Mexico or 11 percent of the Gulf’s total.

However, the dollar reached a new two-decade high against a basket of currencies on Wednesday, as rising global interest rates fueled recession fears. A strong dollar reduces the demand for oil by making it more expensive for foreign buyers. 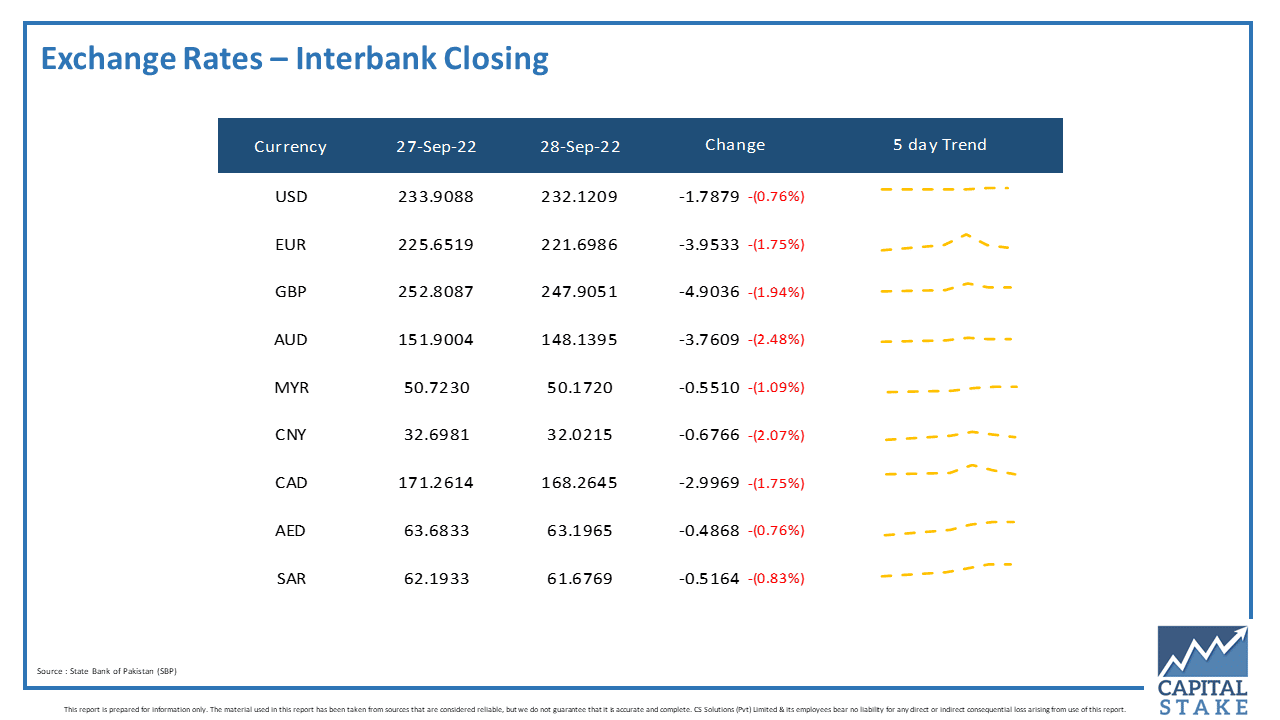