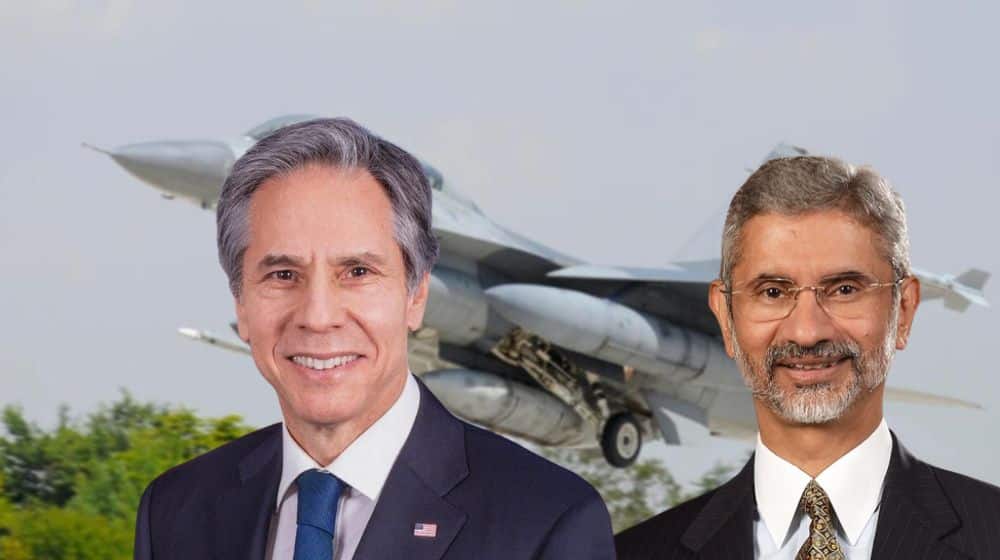 The United States (US) Secretary of State, Antony Blinken, has asserted that the $450 million F-16 fighter jet equipment deal is solely for the maintenance of Pakistan’s current fleet.

He made these remarks at a press conference with India’s External Affairs Minister, Dr. S. Jaishankar, at the State Department in Washington, D.C, on Tuesday.

He detailed that the deal does not entail any new aircraft, systems, or munitions, and clarified it is only meant for sustaining the F-16s, in view of the terrorism threats originating from Pakistan or from the sub-continent.

Furthermore, he noted that allowing such threats to continue with impunity is not in anyone’s best interests, which is why Pakistan’s capabilities will assist everyone in counterterrorism operations.

He also underlined US’s responsibility and obligation to sustain the military equipment that it provides/sells to other countries.

Moreover, he responded to a question asking about the explanation for F-16s’ use in counterterrorism and elaborated that the regional threats like Tehreek-i-Taliban Pakistan (TTP), ISIS-Khorasan, and Al-Qaeda are evident and ensuring the means to counter them will be beneficial for everyone.

Citing the ties between Pakistan and India, he urged both to resolve their conflicts through the proper diplomatic channel.

Note that Jaishankar did not openly oppose Blinken, but he warned the US at an event for the US-based Indian community that it is not deceiving anybody and the deal cannot be justified on the pretext of counterterrorism since it is widely known where the F-16s are deployed (referring to India).

In addition, he also claimed that the ties between Pakistan and the US have not served the interests of both countries.

Earlier, Indian Defence Minister, Rajnath Singh, communicated Indian concerns about the F-16 deal to the US.

I conveyed India’s concern at the recent US decision to provide sustenance package for Pakistan’s F-16 fleet.