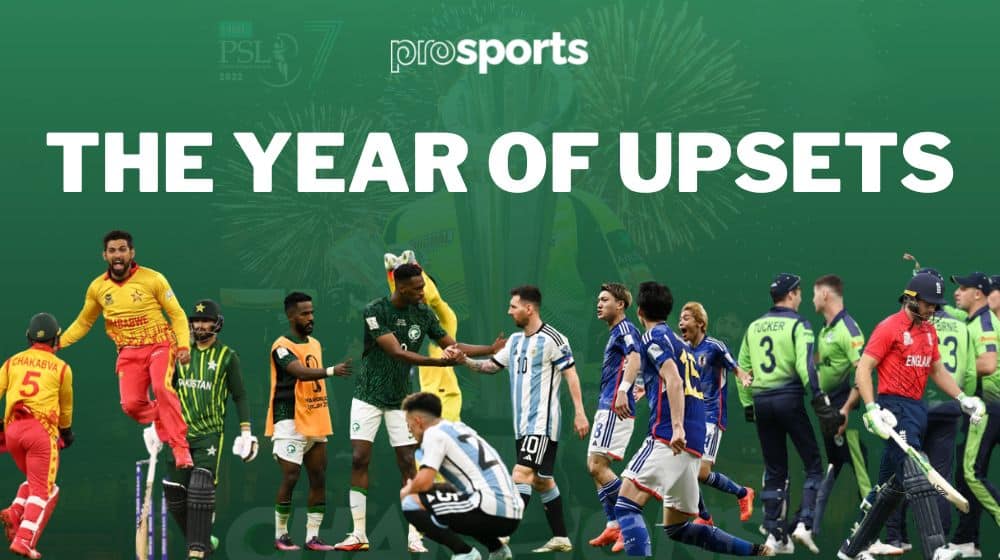 2022 has been a great year for sports fans as both the T20 World Cup and FIFA World Cup have been held in the year. Both the tournaments have been fascinating to watch with some terrific displays on show from top international teams.

While the stronger teams have showcased their class on various occasions, there have been numerous instances of major upsets too, which has led the year 2022 to be referred to as the ‘Year of Upsets’.

Everyone loves a good underdog story, and this year has brought many such stories to light. The underdog story truly began to shine in the 2022 T20 World Cup as Namibia caused a major upset against Asian champions, Sri Lanka, in the opening match of the tournament.

The story continued as Scotland roared to victory against two-time champions, West Indies, the next day. This was just the beginning of the tournament, and the ‘smaller’ teams, inspired after the wins of their fellow associate teams, went hunting for more scalps.

West Indies were on the receiving end once again as they suffered a shock exit from the tournament in the first round after losing to Ireland in their third match.

Ireland carried on their brilliant work as they went on to defeat the eventual World Cup champions, England, by five runs, to send shockwaves around the cricketing world. The next day, the runners-up, Pakistan, was on the receiving end as they were defeated by Zimbabwe by one run in a thrilling encounter in Perth.

The upsets died down for a few days as stronger teams got a hold of their bearings and clawed their way back into the tournament. This was until the Netherlands faced off against South Africa on the final day of the Super 12s stage.

Pakistan and Bangladesh’s hopes of qualifying for the semi-finals were in the hands of the Netherlands as a win for them would turn their match into a virtual quarter-final as South Africa would be eliminated from the tournament. Meanwhile, the Proteas needed a win to secure their place in the final four of the competition.

Well, 2022 played its part as the Netherlands registered their most memorable win in cricket history as they taught South Africa a cricketing lesson. Dutch registered a convincing 13-run win to send South Africa home packing.

The terror of minnows did not stop at the T20 World Cup though as the 2022 FIFA World Cup brought some surprises of its own.

The 2022 FIFA World Cup in Qatar promises to be one for the ages as the tournament has already witnessed two of the greatest upsets in World Cup history. The tournament got off to a less than impressive start as hosts Qatar were comfortably defeated by Ecuador in the opening encounter.

The following day, fans witnessed normality as England and Netherlands won their matches and Wales and USA played out an exciting draw. The mega-event came to life on the third day as Lionel Messi’s Argentina took on Saudi Arabia. On Paper, it looked like a complete mismatch as a star-studded Argentina, favorites to win the tournament, took on a lackluster Saudi Arabia side.

The story on the field was completely different as Saudi Arabia outwitted Argentina with a tactical masterclass. The first half was one-sided as Argentina took an early lead but Saudi Arabia came roaring back in the second half and staged an epic comeback to win the match 2-1. The shocking result sent shockwaves in the footballing world as the fans celebrated one of the biggest underdog stories in football.

Saudi’s massive result not only sent the fans in jubilation but also inspired the so-called ‘minnows’ to have a go at the top footballing nations. Just a day after, Japan caused yet another upset as they staged an epic comeback of their own against four-time World Champions, Germany.

The Samurai Blue were simply sensational as they came back from 1-0 down to score two goals late in the game as they themselves registered their most historic win in footballing history.

Football fans all over the world were left perplexed at the two results as they now wait for things to further unfold in the mega-event.

There have been some awe-inspiring upsets in both cricket and football in the current year, which has led to an important question, How did these major upsets start? With some incredible detective work of our own, we have confidently established the events that kickstarted this sequence of upsets, and the answer lies in Pakistan.

How Did These Upsets Start?

The upset sequence of events started on 27 February 2022 at Gaddafi Stadium Lahore as Shaheen Afridi-led Lahore Qalandars shocked the cricket fans in Pakistan by winning Pakistan Super League (PSL) for the first time in seven attempts.

Lahore Qalandars, for six years, were the laughingstock of the PSL brand. Lahore, despite possessing some of the biggest international superstars in their ranks over the years such as Brendon McCullum and AB de Villiers, failed to qualify for the playoffs in the first four seasons, as they finished at the bottom of the table in each of the first four seasons.

The fifth PSL season brought some success as they qualified for the playoffs for the first time in their history and then went on to play the final of the competition. They suffered a heavy defeat at the hands of their arch-rivals, Karachi Kings, in the final as their hopes of winning the trophy came crashing down.

PSL 6 saw them return to their old selves as they finished at the fifth spot, outside the playoffs position.

Everything was normal in the sporting world until the seventh edition of the PSL. Under the leadership of Pakistan’s exciting pacer, Shaheen Afridi, Lahore Qalandars stunned the cricketing world as they defeated Multan Sultans in the final of the tournament to win their first PSL title.

Since then, the sporting world seems to be in a matrix glitch, where upsets are the new normal.

P.S. This piece is based on facts and in no way it is satire.