Sidra Humaid, a Karachi-based social media influencer and a businesswoman, who reportedly swindled around Rs. 420 million, under the monthly ballot committee (BC) system, has sought the court’s help for security after receiving threats from people who have been deprived of their money.

In this regard, a sessions court in Karachi has issued notices to the SSP (Complaint Cell) and SHO Shahrah-e-Faisal Police Station and asked for their remarks by 14 December on the matter after Sidra Humaid filed a petition and requested security in light of threats.

Humaid’s lawyer, Kamran Aslam, argued that his client is being blamed for operating an online scam even though she has not sold or advertised any product on social media platforms. He maintained that BC system is a traditional means of pooling money and returning it to committee members on their respective turn.

In addition, Kamran Aslam contended that his client had assured the affected parties that she would return their amount soon, however, many people, whom she did not even know, falsely claimed the money.

Moreover, several people have paid visits to her house and threatened her to return their money by using abusive language. Humaid’s attorney further stated that the applicant is seeking a court order directing the SSP (Complaint Cell) and SHO Shahrah-e-Faisal to register an FIR against her harassers and provide her with security.

Sidra Humaid has allegedly embezzled around Rs. 420 million, which she collected from hundreds of people, mainly women, under the monthly BC system. She also runs a home-based eatery, Daily Bites, and a handicraft startup, Croise. 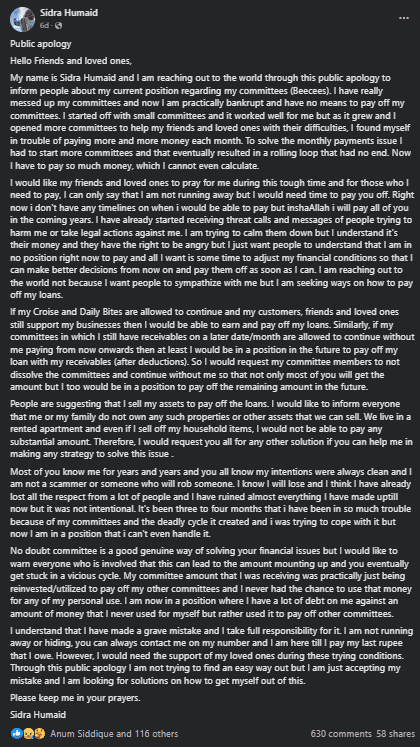 It is worth noting here that many people took advantage of the situation and falsely accused Sidra Humaid of stealing their money, despite the fact that they were not even involved in the BC system.