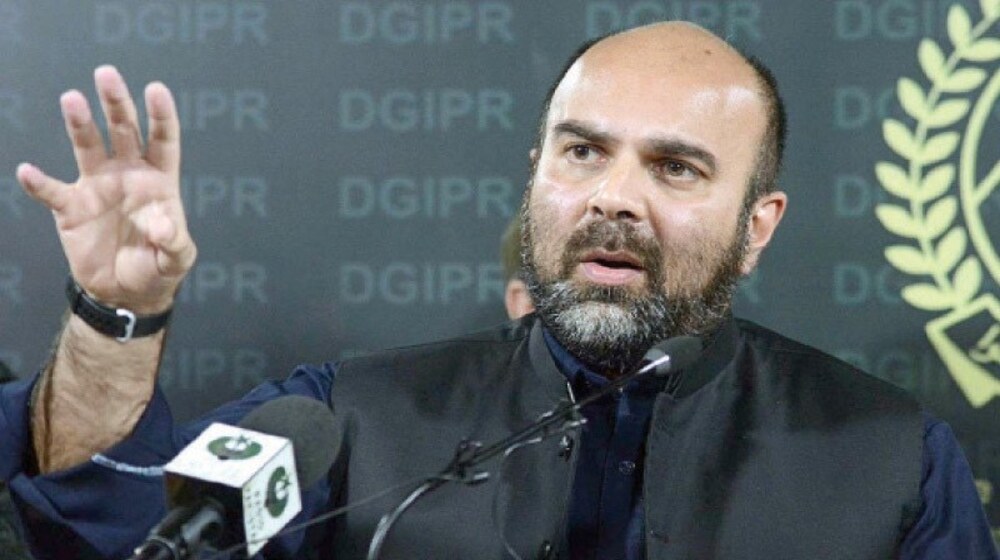 Finance Minister of Khyber Pakhtunkhwa, Taimur Saleem Jhagra has said the provincial government would be facing a shortfall of Rs. 155 billion due to unpaid obligations of the federal government.

Grants for Temporarily Displaced Persons (TDPs) were reduced from Rs. 17 billion to zero, he added.

The KP finance frontman said that ex-FATA’s budget was reduced after the merger and the federal government discontinued the Sehat Sahulat Programme for Newly Merged Districts from June 30, 2022, which is now funded by KP.

The estimated cost of integrated Sehat Card Plus for NMDs is Rs. 4.5 billion, the minister said and added that the federal government reneged on its commitment to transfer PSDP funding of Rs. 5 billion to Khyber Pakhtunkhwa and indicated that the province should foot the bill for integrating an additional 1.5 million families into its Sehat Card Plus program.

The development grant was initially reduced from Rs. 54 billion to Rs. 50 billion, then revised to Rs. 55 billion after the provincial government’s agitation.

Only Rs. 5 billion has been released so far in the current fiscal year, he said. Khyber Pakhtunkhwa has consistently received less than its due share of federal tax assignment and 1 percent war on terror, as per the 7th NFC award of Rs. 25.35 billion against Rs. 26.37 billion and actual transfer on account tax assignment Rs. 211.03 billion against a share of Rs. 219.40 billion.

Under 7th NFC award allocated a 14.62 percent share of the provincial divisible pool to Khyber Pakhtunkhwa as well as a 1 percent grant due to the war on terror.

The shortfall against the due share of total Federal Board of Revenue (FBR) collections amounts to Rs. 22.43 billion and no amount on account of net hydel profit payment was disbursed to the province since the present coalition government during eight months at the federal level.

Jhagra said that non-payment of NHP to Khyber Pakhtunkhwa has been creating fiscal problems for the province as its arrears has increased to Rs. 61.216 billion with indexation arrears of Rs. 21.6 billion, arrears of fiscal year Rs. 11.902 billion and regular NHP for July-November 2022 Rs. 12.218 billion besides Rs. 16.638 billion for the remaining period of December-June 2023.

On top of that, the FBR revenue collection is growing from 15 percent to 16 percent in the current fiscal year against 30 percent last year will reduce the provincial share of federal tax revenues by over Rs. 65 billion. Jhagra said that the Khyber Pakhtunkhwa government has increased its revenue by 122 percent during the last three years by introducing reforms and removing redundancies or duplication in 20 taxations as well as eight non-taxation sub-heads.

The provincial finance minister further said that the burden of pensions in KP is continuously increasing. The pension bill of Khyber Pakhtunkhwa will increase to Rs. 300 billion by the year 2027.

It was Rs. 1 billion in 2003-04 which has now increased to Rs. 108 billion rupees, he added. Jhagra said that the KP government has introduced new pension reforms to facilitate the five thousand employees.

In the new system of pension, the government will contribute 10% and the employee will contribute 12.1 percent and we are hoping that changes in pension rules will save Rs. 1 billion annually.

The KP finance minister said that the pension bill of the federation and the provinces has been increasing by 25 percent annually and the pension bill of the entire country will increase from Rs 1200 billion to Rs. 3,000 billion by 2027. He also said that the KP government has increased the early retirement age from 45 to 55 years and we are expecting that the KP government will also save Rs. 12 billion annually.

Taimur Jhagra further said that he had not written a letter to the IMF on the issue of a surplus budget but actually reached out to the federal government. “I have no regrets and I stand by my position on the matter of the letter,” he added.

While replying to the question, he also said that Ishaq Dar has refused to meet in the last few weeks to discuss the financial issues faced by the northern province.