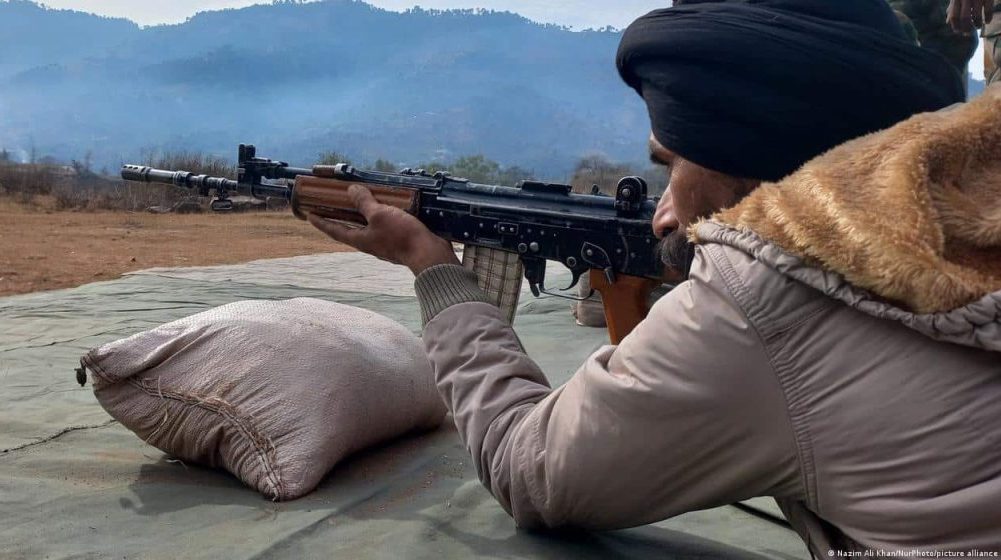 India has revived its village defense program in Kashmir following a recent spate of deadly attacks. The decision to send weapons into the contentious region has been condemned.

Authorities in Indian-administered Jammu and Kashmir are once again arming and training thousands of residents along the border region to defend themselves from attacks by “armed insurgents.” But leaders in the restive region have slammed the move.

Many villagers have been equipped with automatic rifles and given defense training for “terrorist attack” scenarios, according to officials. It comes amid a recent uptick in violence against the region’s Hindu minority.

The decision to revive the groups — originally set up in the 1990s — was taken by the authorities in March last year, but the training was ramped up following an attack in Dangri, a remote village in the Rajouri district in southern Jammu.

On the evening of January 1, as the villagers were preparing for dinner, two gunmen indiscriminately opened fire at a row of residential houses in the village — which falls close to the Line of Control (LOC), a demarcation line between the Indian and Pakistan-administered parts of the disputed region. Four civilians were shot dead.

A day later, while the villagers were mourning the deaths, two children aged five and 12 were killed in an explosion close to one of the houses targeted the day before. Several people were also wounded in the incident and a seventh civilian succumbed days later.

Dangri villagers ready to defend themselves

Dheeraj Sharma, a village head in Dangri in the Rajouri district where the incident took place, told DW that between 200 and 300 people have been trained in the village and provided weapons by the authorities in the past two weeks.

“There was a lot of fear in the village after the incident. The fear is now vanishing,” Sharma said, adding that the villagers are ready to defend and safeguard themselves.

Sharma blamed the government for ignoring these groups for many years. “After this incident, many residents are also in the process of acquiring armed licenses.”

The government-backed armed volunteers in the villages were formed in 1995 in the southern districts of Jammu. It mostly comprised of members from the Hindu community in the remote border districts preparing to fight the “armed insurgency.”

From a few thousand members initially, the numbers grew over the years to 27,000, which are now being revived along with new volunteers.

But after the decline in violence in the region in the early 2000s, the groups were disbanded without any official declaration. Many who were part of the armed groups say they were not paid for years forcing them to surrender their weapons.

Following the latest incident, the VDGs across many districts in the region are being re-grouped with fresh training and weapons. Indian Home Affairs Minister Amit Shah has promised to establish a “360-degree security ring” in the region.

Sanjay Sharma, 40, from the Rajouri district was trained last week.

“Everyone wants to be part of it to safeguard the villages from terror threats,” Sharma told DW. “Men and women, everyone is ready to defend.”

Varinder Kumar, an official of the Central Reserve Police Force (CRPF) in Rajouri, told the media that they have been moved to Rajouri after the recent killings to support the training.

Those who have been running armed patrols for years have also welcomed the move.

“We have been demanding government support. After the attack, the government has finally woken up,” Uttam Chand, vice president of the Kathua district VDGs, told DW. “We are happy that more people are joining. Locals are aware of the topography in their areas and can defend well.”

Fanning the flames in Kashmir

But there have also been many voices condemning New Delhi’s decision to arm local residents in the highly contentious region, claimed by both India and Pakistan as well as being home to an insurgent separatist movement.

The two neighboring nuclear powers have fought two of their three wars over Kashmir. New Delhi has also accused Islamabad of supporting and arming the insurgents.

In August 2019, the tensions in the region were heightened when the ruling Bharatiya Janata Party (BJP) government in New Delhi unilaterally stripped Indian-administered Kashmir of its limited autonomy and divided the region into two parts, dubbing one Jammu and Kashmir and the other Ladakh.

The move worsened the already difficult relations between India and Pakistan. It also faced opposition from local politicians and residents, but the BJP government defended the decision, saying it would bring progress to the region and wipe out the armed insurgency.

But three years later the violence is still ongoing. There are still clashes between the insurgents and Indian armed forces, and attacks on Hindus and migrant workers have increased.

The recent attack in the Rajouri district has sparked fears violence is now spreading to areas once untouched by the conflict.

There are also concerns over past accusations against the VDGs for alleged criminal activities and human rights violations.

Shafiq Mir, Chairman of All Jammu and Kashmir Panchayat Conference (AJKPC), a union of village heads across the region, told DW that placing weapons in the hands of the civilian population will not “have good consequences.”

“The government should strengthen security deployment in sensitive areas instead of giving arms to people. The weapons should not be given in the hands of any civilian community,” Mir said.

“These guns in the past have been used to settle family conflicts.”

The former chief minister of the region, Mehbooba Mufti, also criticized the move saying that the revival of the groups contradicts the government’s claims of normalcy in the area.

There are 221 cases against VDGs for alleged involvement in acts of violence such as murders and rape. These groups received monthly payments of around 4,000 rupees ($49, €45) from the local government.

VDG leader Uttam Chand, however, said that abuses of power would be punished.