The Pilgrimage to Mecca – Hajj – is one of the five pillars of Islam. Labelled as one of the principle pillars of belief, the fact alone is indicative of a required obligation for all Muslims to uphold. In pure essence, every adult Muslim who is physically and financially capable of performing Hajj is obligated to do it at least once in his/her lifetime. Read the article and learn How To Perform Hajj in the right way.

In accordance with the Islamic Calendar, the month of Zilhaj symbolizes the gathering of the Muslim Ummah from all over the world. This action alone signifies the aspects of faith, unity and solidarity as upholded and maintained by the Holy Prophet Muhammad (P.B.U.H).

While the specific rituals carried out by Muslims today date back to the Prophet Muhammad’s “farewell pilgrimage” in 632 A.D, travelling to Mecca was a sacred annual rite for Arabian tribes centuries before the advent of Islam. According to Islamic tradition, the Kaaba – a black silk-clad stone structure at the heart of the Grand Mosque in Mecca – was built by the Prophet Abraham in biblical times.

Putting it simply, Hajj is quite a complex measure of worship. Several different ways pertaining to sectarian division have been devised, and somewhere in between, there lie many scholarly differences. Although one should feel obligated to perform the pilgrimage under a unified emblem of Islam, the journey to the Ka’abah still presents an exciting travelling experience.

Can You Perform Hajj?

The Hajj is not to be undertaken lightly or as an afterthought. In ancient times, it was not uncommon for pilgrims to die during their journey to Mecca. Though modern conveniences now allow millions of Muslims to quickly and safely travel to and from the holy city, the Hajj should still be approached with the seriousness and dedication of these early pilgrims.

It is strongly recommended to study the rituals of the pilgrimage. Clear your mind of worldly distractions and most importantly, repent to your heart’s content. God is All-Merciful, so have faith that your sins will be forgiven by the time you arrive in Mecca! 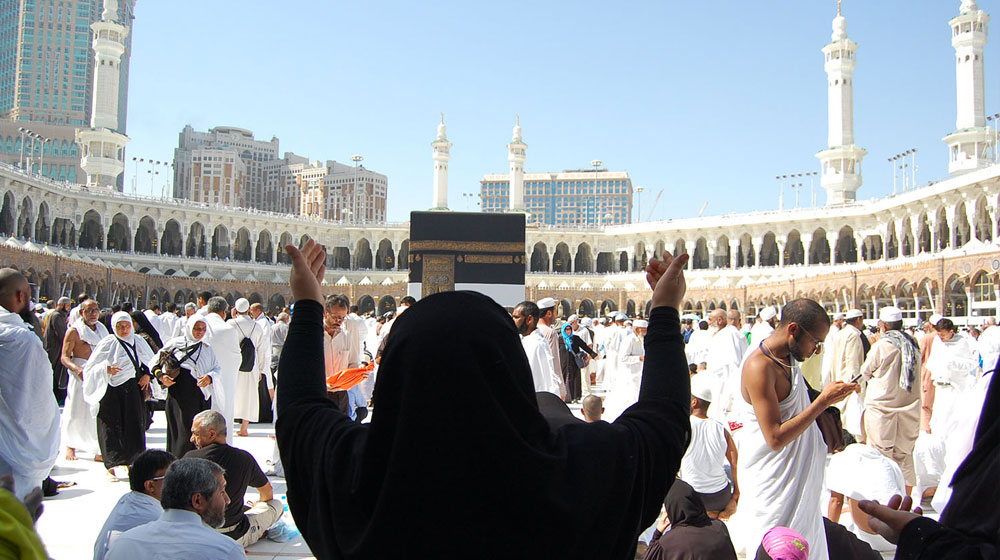 As it is the case with all forms of worship, a Muslim’s Hajj must be undertaken with sincerity and out of devotion to God. The pilgrimage cannot be performed for the purpose of gaining worldly desires or materialistic recognition, but for the sake of spiritual cleansing.

Perform Hajj in accordance with the words and deeds of Holy Prophet Muhammad (P.B.U.H). The simplest way to walk the Islamic way is by following the Sunnah.

How To Perform Hajj | The Type of Hajj to Undertake

According to Islamic rules and regulations, Muslims have three different options when it comes to performing Hajj. Each option is slightly different in terms of rituals performed, and the timeline of events on the pilgrimage is quite different. The three types of hajj are as follows:

Plan Your Itinerary For Saudi Arabia

Hajj is entirely held in and around the holy city of Mecca.
As when traveling to any foreign country, you want to have your passports, travel documents, tickets, and so forth sorted out well in advance. Keep in mind that national governments can sometimes be slow to issue new passports when old ones expire.

Prepare To Be Basked In Religion – And Complications..

Known as a traditionalist Islamic Monarchy, the Kingdom of Saudi Arabia has set rules for personal conduct – especially regarding women – that may seem unfamiliar to the incoming foreign traffic. Putting it simply: all women performing Hajj should plan to travel in the company of a mahram – any related man, such as their father, brother, husband, son, or any approved individual according to Islamic rules. Women over 45 can perform the Hajj without a Mahram if they are part of a large group and have a notarized letter of consent from their husband.

All people – women and men – who are attending the Hajj should prepare to be exceedingly modest for the duration of their stay in Saudi Arabia. Clothing must be modest and unadorned – for much of the pilgrimage, special religious garb is required for men. Cologne, perfume, makeup, and scented soap should be avoided. When a pilgrim enters the sacred Ihram state of ritual purity, smoking, swearing, shaving, cutting one’s nails, and sexual intercourse are forbidden.

Assume Ihram. Ihram is a holy state of purity that all Muslims must assume before performing the rites of Umrah and Hajj and which must be maintained for the duration of the rituals. Ihram requires certain physical actions and behavioral changes, but don’t be mistaken – the real state of purity is attained spiritually by proclaiming one’s intention to sincerely pursue the Umrah/Hajj and by reciting the Talbiyah prayer. Thus, someone who assumes Ihram externally but doesn’t have sincere belief in his or her heart isn’t truly fulfilling Ihram. Men and women enter into Ihram differently – see below for details: 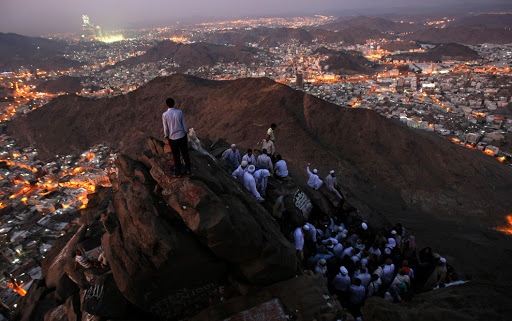 How To Perform Hajj | Declaration – Intention And Talbiyah

A special boundary called a Miqat surrounds the holy sites of the Hajj. Pilgrims cannot cross this boundary without having attained the pure state of Ihram. When a pilgrim in the state of Ihram approaches the Miqat at one of six historical entry points, he pronounces the Niyyah – a short recitation of his intention to complete the Umrah. Then, at the Miqat, the pilgrim recites the Talbiyah, a prayer that will be repeated often during the pilgrimage. The words of the Talbiyah are:

Note – it is tradition to enter these holy entryways and most other holy buildings with the right foot first.

How To Perform Hajj | Tawaf – The Holy Ka’abah

At first sight of the Ka’abah, keep your eyes fixed on it and stand to the side of the crowd as you say “Allahu Akbar” (“God is Great”) three times, followed by saying “La Ilaha Illallah” (“There is no god but Allah”). Recite other holy verses if you desire. Say a blessing for the Prophet Muhammad (peace be upon him) and, in total humility, make your prayers to Allah. This is one of the best times to pray, for it is the time for acceptance and closeness to Allah.

Perform the Tawaf. It is an anti-clockwise encirclement of the Ka’abah that subjugates the pilgrims towards the connection with the holy site. In detail: All should face the Ka’bah so that the Black Stone is on your right. Make another Niyyah for Umrah, saying: Allah huma inee ‘ureedul ‘umrata fa yasir haa lee wata qabal haa min nee (O Allah, I perform Tawaf of Umrah to please You. Make it easy for me and accept it from me).

Sa’ey means “seeking” or “ritual walking”. In practical terms, it means walking back and forth seven times between the hills of Safa and Marwah which are to the south and north of the Ka’bah, respectively. Originally, this was done outdoors, but today, the entire path is enclosed in a long gallery.

Declaration Of Intention To Perform Hajj

Depending on how you’ve planned your trip, most pilgrims performing Tamattu pilgrimage have a several-day break between their Umrah and Hajj duties. Same as before, perform another Niyyah:
Allahuma in nee u-reedul hajja fayassir hu lee wata qabal hu min nee (O Allah! I intend to perform Hajj. Please make it easy for me and accept it from me). After, say the Talbiyah three times.

The rites of hajj last 5 days from the 8th to the 12th of Zilhaj. For this reason – among others – you must maintain ihram for three days.

On the first night, no major rituals take place, so you may spend your time praying and reflecting with other pilgrims if you wish. Many pilgrims choose to say the Dhuhr, Asr, Magrib, Isha and Fajr prayers.

On the second day, pilgrims travel to Arafat for Waquf.  No specific prayers are assigned for the Waquf, so simply pray to Allah sincerely from your heart. Many pilgrims like to also spend time reflecting on the course of their life, their future, and their place in the world

Next, go to Muzdalifah – between Mina and Arafat – and proceed to prayer. In the morning hours, gather pebbles for the stoning ceremony. This ceremony can be extremely crowded, tense, and emotional. Trampling deaths, though rare, have occurred. Because of this, the elderly, sick, and injured are discouraged from participating. Instead, they may perform this later in the evening or have a friend or confidant perform the ritual in their place. 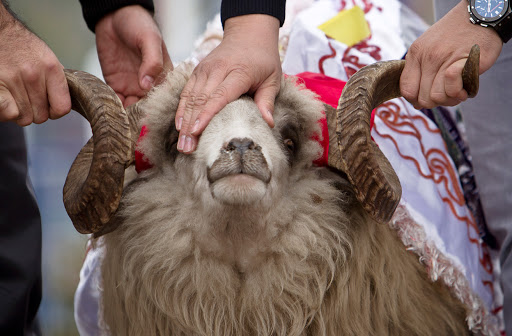 After the stoning ceremony, offer a Qurbani to Allah. Qurbani, or animal sacrifice, can be done at any point on the 10th, 11th, or 12th day of Zilhaj. If Ramy – stoning ceremony – has to be postponed for any reason, wait until after Ramy to make your sacrifice.

In Mina, you must once again participate in the stoning ritual. This time, you will not throw pebbles only at the Jamrat al Aqabah, but also at two other monuments – the Jamrat Oolah (the first jamrat) and Jamrat Wustah (middle jamrat).

Farewell Tawaf is the final tawaf, walking around the Ka’bah seven times as done initially. In this final period, reflect and repent, pray and praise, and make further Dua for your loved ones.

Since the month of Hajj is fast approaching, prepare yourself if you intend to visit the Holy cities. Stay up-to-date with news regarding the application procedure, collect all required items, and most importantly, resolve yourself in a state of spiritual realization. Please do remember the team of Pro Pakistani in your prayers.

Send this to a friend