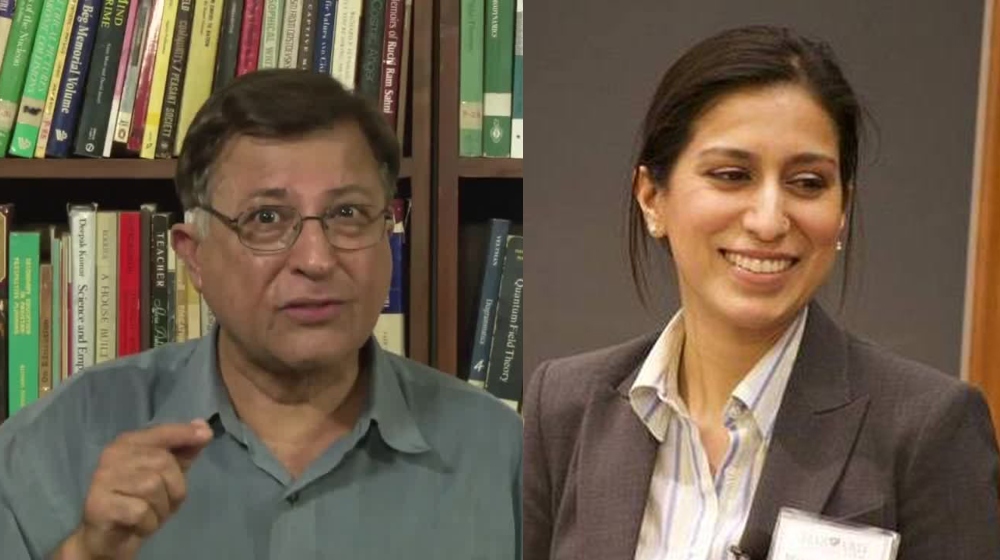 We’re no stranger to men losing their cool after losing an argument on television. If they lose to a woman that’s when they roll out the insults, and in some cases, even profanities. Yet, somehow audiences expected better from former LUMS professor, Pervez Hoodbhoy, who is also considered one of the top academic minds in Pakistan.

In his appearance on Kamran Shahid’s talk show, Pervez Hoodbhoy was supposed to present arguments in opposition to the uniform school curriculum, Single National Curriculum (SNC), that the Federal government of Pakistan is rolling out.

On the other hand, one of the committee members that put a lot of time and research into creating SNC, Dr. Mariam Chugtai was there to explain what this new curriculum is all about.

Things went from bad to worse on TV.

Let’s start from the beginning how we got to this point.

What is the Single National Curriculum?

SNC is really a national education policy that defines a set of guidelines, and a model textbook to ensure that students are provided a minimum threshold of quality education in all educational bodies, even in madressahs.

Since education is a provincial matter under the 18th Amendment, provincial governments can either utilize SNC as it is, or adapt it to their needs. Similarly, madressahs and private schools can also tweak SNC to meet their needs.

There were various debates regarding one uniform curriculum for every Pakistani, with Pervez Hoodbhoy arguing that this might lead to further Islamization in society. Despite Mariam’s attempts to convince him that his fears are misplaced, Hoodbhoy took things rather badly.

When Pervez Hoodbhoy couldn’t counter Dr. Mariam Chugtai’s arguments, he resorted to comparing her to radical extremists like the TTP. Likening an academic to a terrorist outfit?!?

Pardon us when we say, that escalated rather quickly!

Also notice how easily self anointed liberals call fellow Pakistanis "extremist", "Taliban Khan" & "Good Taliban" who they dare to have a different opinion than theirs. pic.twitter.com/xYYEUla97h

That didn’t further his arguments, as now we still don’t know what is really wrong with the SNC idea. We do know even Pervez Hoodbhoy is not immune to throwing low blows.

That’s when people called out the left for hypocrisy. Netizens stated that despite his uncalled-for insult and misdemeanor towards Dr. Mariam Chugtai, his compatriots in academia and media failed to call out one of their own, Pervez Hoodbhoy, for his bad behavior.

Wonder how many of our media class and intellectual types will condemn Mr Hoodboy for this deranged attack on @MariamChughtai . #Pakistan #AikNisab

There is a reason he got fired from his job

And by Fassadi I mean the TTP etc & not Dr. Maryam Chughtai. She's a gem.

Pervez Hoodbhoy is no less than a fasadi molvi who issues nonsense fatwas & tries to speak harder just to sound ligit. This is the total tolerance he possesses… ah shame! He's actively losing honor he gained thru his lectures in Physics/Astronomy. #MaryamChughtai

A petty bitter man, who just got his ass handed to him on a plate by Mariam Chugtai. His ego couldn't handle the whooping, so he's resorted to behaviour akin to a spoilt 5 year old brat.

Then there were people who argued how conservatism and radicalism exist both sides of the spectrum (hence the term, radical leftist).

These are real extremists! Liberals dont really want to listen to an opinion not coinciding with them and they would call u "jahil" and "taliban empathizing" for it! Extreme conservatives and liberals are both same!

Sugar-coated extremists they are.They already were ,but this time around they do find someone like Dr. Sahiba who could expose and hit them hard with logically sound arguments;earlier, he tended to enjoy platforms solely to peddle his fictitiously poor sense of history and Islam.

Others wanted the show’s host Kamran Shahid to be reprimanded for failing to intervene as Pervez Hoodbhoy disrupted the decorum. People also questioned why people who are prone to behave badly are invited on national television anyway.

More چ are the people who invite him to listen to his opinions. #laamkaphysicist

@FrontlineKamran ::: its anchors job to stop the explosion of one mind.The show host should be a man enough to stop when someone demean ppl special women

So there you have it, folks. Another outburst against a woman on national television, but now it’s okay since the perpetrator was a ‘learnt man.’ This incident reminds us of the outrage against Khalil-ur-Rehman Qamar when he insulted Marvi Sirmed on live TV. Contrast the public reaction in both of these cases, and a clear disconnect can be observed.

If basic issues like patriarchy and suppression of minority rights aren’t addressed, left or right doesn’t matter, now does it?