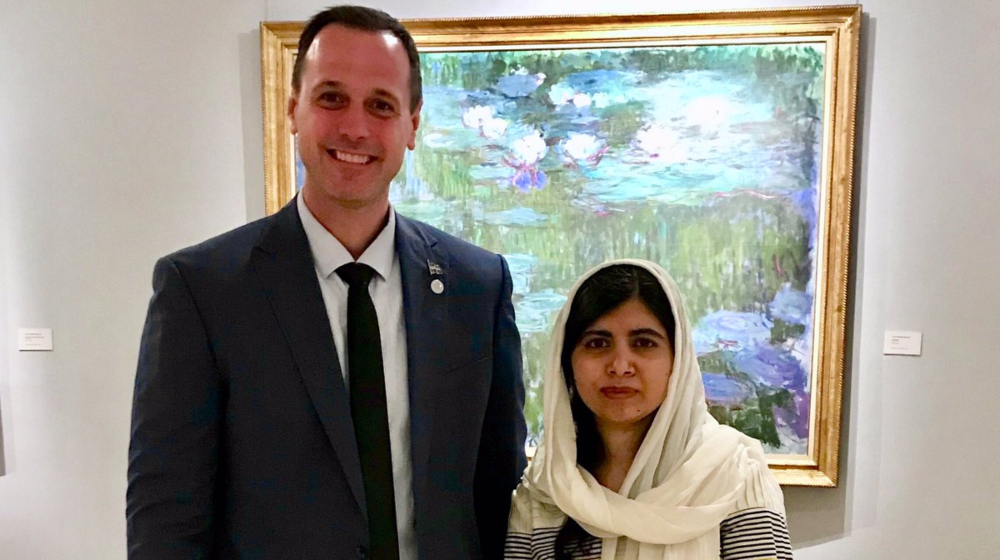 While Quebec’s Education Minister Jean-Francois Roberge’s lauds Malala Yousafzai and her activism regarding girls education, apparently he has issues with her choice of attire.

The education minister of a Western country made it clear that she can teach in Quebec only if she removes her hijab.

These remarks have not sat well with a lot of people.

The same Minister shared a picture with the hijabi education activist on Twitter.

While Jean-Francois Roberge is discussing access to education with a hijabi Muslim activist, the Quebec government has banned public servants in positions of ‘authority‘ from wearing any religious symbols. They say that this is done because they are part of an ‘open and tolerant‘ country.

It is precisely because of this reason that journalist Salim Nadim Valji asked Jean-Francois Roberge  that how would he respond if Malala Yousafzai wanted to teach in Quebec.

Mr. Roberge, how would you respond if Mme Yousafzai wanted to become a teacher in Quebec?

In response, the Minister tweeted this:

I would certainly say to him that it would be a huge honour and that in Quebec, as is the case in France (where we are now) and in other open and tolerant countries, teachers cannot wear religious signs in the exercise of their functions.

Scotland Police Makes Hijab an Official Part of Their Uniform!

The Canadian Education Minister actually defended the law saying that’s just how it is in ‘open and tolerant countries‘ like France.

This begs the question. Why are supposedly ‘tolerant’ countries or provinces (like Quebec) intolerant towards religious expression and identity? Just how many fundamental rights did they strike out there?

The Irony of Open Intolerance

If you’re wondering why could Malala ever teach in Canada, most of us are unaware that she’s also an honorary Canadian citizen. The Nobel Peace Prize Laureate was at a G20 planning session in France when she met with Quebec’s Education Minister.

Malala Yousafzai survived a bullet in the head by the Taliban in 2012 for daring to speak out for girls’ education at age 15. Since then the young lady has become a symbol of struggle for access to education.

Despite all that apparently, she’s just not good enough for an ‘open and tolerant Quebec‘. And Twitterati are not having any of it:

So Quebec, what’s the last thing you did to empower women? Because telling women what to wear does not count as empowerment.

Hi, did you inform Malala that extremism / fanaticism / discrimination has been systemically entrenched into the public sector and is overflowing into the private sector? Did you let her know women have left / are leaving Quebec because they no longer feel safe? #Bill21

This is why people came out calling out the hypocrisy of the situation (not to mention the irony):

“Did you tell her that in Quebec, women dressed like Malala do not have access to certain jobs in the public service? Thanks to your government.”

Hi, did you inform Malala that extremism / fanaticism / discrimination has been systemically entrenched into the public sector and is overflowing into the private sector? Did you let her know women have left / are leaving Quebec because they no longer feel safe? #Bill21

Easy there with the hypocrisy JF. Malala is beyond your league pal.

It is important to mention here that the semi-autonomous province of Quebec has French as its official language. Even Justin Trudeau, the Canadian PM and a Quebecois himself, has not denounced this selective intolerance.

Thankfully, not all Frenchmen feel the same way.

“And here I am a French Canadian who has left Quebec for Ontario to avoid immigration in Quebec. Quebec does not accept exogamy. Now it does not tolerate women with covered heads either. What target after that?”

Some people think it’s still okay cause other people did it too.

And that justification makes this ok? According to your logic, why don't you list down the countries that allow this to happen?

The one thing most ‘tolerant’ extremists don’t get is that the hijab is not strictly a religious attire. Its also a fashion trend in itself. Muslim and even Hindu women don the headscarf in a range of different variations.

From wearing a loose headscarf called a ‘dupatta‘ like Malala to a turban like Halima Aden, its become a style icon for many women all over the world.

“Do you do it on purpose? Confuse the Islamic veil with a traditional garment from India! One that they can remove at any time! The amalgam is so grotesque, you should be ashamed. The # Loi21 is the separation of religion from the state. VICTORY !!!”

While the ban does extend to the clothing associated with other religions like kippah, turban, hijab, etc, there is a growing feeling that this ban mainly targets Muslim women.

However last month, Roberge said while the law must be respected in schools, there will be no inspectors sent around to enforce Bill 21.

A legal challenge to Bill 21 has been launched by the Canadian Civil Liberties Association and the National Council of Canadian Muslims.