Zhalay Sarhadi has received criticism for her latest comments against Esra Bilgic, where she said,

Since then, she has now come forward to clarify her comments in the face of that backlash. Her controversial comments were part of an interview that took place after Esra was appointed as the brand ambassador for Qmobile and then also became the face of national telecommunication network Jazz.

In her previous comments, Sarhadi had also gone on to support Yasir Hussein who has been quite vocal against the influence of popular drama Ertugrul and the role of its stars in the Pakistani industry.

Following the backlash her comments received, the Pakistani actress took to Twitter to defend her statement, saying that it was ‘our very own people’ she was being critical against and she had no problems with Esra or Turkish content as a whole.

In this air of immense misunderstandings let me say my piece. I have nothing against any nationality let alone our brothers and sisters of Turkey! I love Turkey, Turkish heritage and their dramatic productions. They are far ahead of us in every way!

However, she continued to defend her previous statement of it being “the slap to our faces” [sic] because of faults within our own industry.

Which has resulted in our awaam being inclined towards better quality programs, having outsourced it from our very own Turkey. I said and will say “the slap to our faces” is not because we have the sublime #esra as a brand ambassador, it is because we failed to see our own.

Along with Sarhadi, Yasir Hussein has also been a vocal critic of the Turkish drama. Following the Turkish’s star’s appointment as Qmobile brand ambassador, Hussein took to Instagram to express his disappointment and wondered why brands couldn’t hire Pakistani actresses instead. 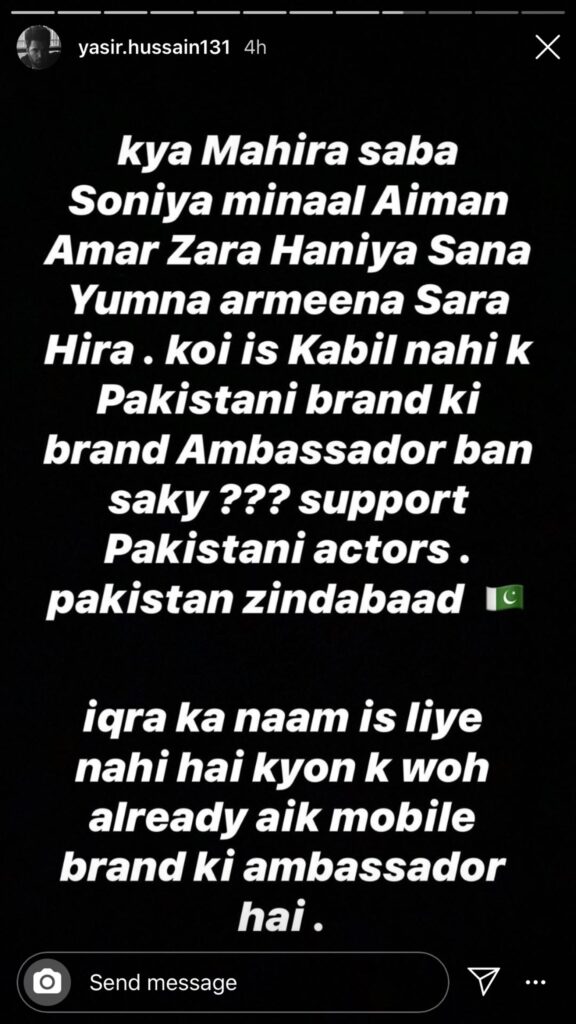 Actress Reema Khan was also part of the voices that initially criticised the drama’s influence on Pakistan and then was later forced to clarify. Khan had previously criticised PTV for broadcasting the Urdu dubbed version of the famous show as Ertugrul Ghazi. According to her, the move was harmful to local artists who were also taxpayers. After being forced to clarify her comments she said

“All I said was that if this is being broadcast on our national channel there should be a ‘barter system‘. Barter system means our archives have olf PTV content if that were dubbed and aired in Turkey or this should be discussed with their government, then the revenue from that would boost our production.”

It’s interesting that so many artists have voiced out such emotional statements following the rise of the Turkish drama, and almost all these statements have been controversial or unclear enough to later have to be clarified.

Sarhadi and Khan both seem to twist their words a little bit in their clarifications. And even if that’s not the case, there’s a clear trend that Pakistani stars feel threatened by the new show’s popularity.

It’s an interesting stance to take given that Pakistani TV has recently come under fire for its lack of diverse storylines and awkward portrayals of unhealthy romantic relationships. Maybe it’s time our stars look inwards into their own influence before criticizing others?