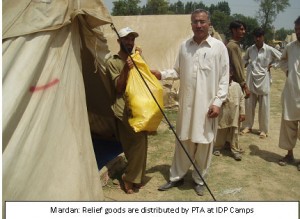 The above mentioned items were purchased and sent to the IDPs camps after a survey by the PTA team which assessed the immediate needs of the displaced persons in the camps.

While talking on the occasion PTA officials said that the Authority is with the IDPs in this hour of trial and would do its utmost to provide relief to the affected people.