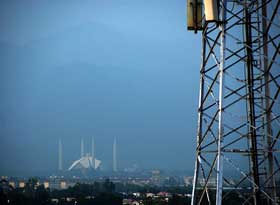 In the past, Pakistan has been termed as fastest growing telecom industry in the world. This was the reason that World’s strongest and most successful telecom players (China Mobile, Etisialat, Singtel, Orascom and Telenor) invested their money in Pakistani market.

This shows the strength that Pakistani market offers to the investors. Even after the boom era, Pakistani telecom industry has got very healthy competition with all these successful players already well settled in the market.

Another good thing about Pakistani telecom industry is that idea of Significant Market Player is diluting with each passing day. Even the newcomers are betting hard and competing well with same enthusiasm and force.

Expected 3G license will take Pakistani Telecom industry to next level, with latest technology coming into the country. This will not only bring additional foreign direct investment, but the telecom standards of common person will shoot up significantly.

During all this process, Pakistan Telecommunication Authority has played its positive role, throughout. They not only encouraged foreign direct investment by allowing 100 percent foreign ownership, but also kept the race very smooth, fair and transparent. Regulator, not only cautioned the operators when they were wrong, but also facilitated them by taking initiatives, such as Mobile Number Portability, an un-ending potential for them.

1 – High Taxes: Tax is something that is in government’s hands. Despite the fact that in latest budget, taxes on Telecom industry were lowered, but still the move was not enough to bring down the taxes at a considerable level.

2 – Low ARPU: Competitive tariffs, low spending capabilities of Pakistani subscriber, and higher amount of taxes when compared to tariffs are major factors of lower ARPU. Because of lower ARPU, cellular companies were forced to impose service charges, such as 5 percent service charges, call center call charges and so on.

Lower prices on SMS are another factor for lower ARPU, when masses are allowed (incentivized) to communicate at Rs. 3 for a whole day, don’t expect higher ARPU in such a market.

Value added services, such as Mobile Banking, Mobile Internet etc are some of the fronts that are yet to be fully explored by cellular companies. This way, they can not only fetch new subscribers, but can also make their existing subscriber use these services to increase ARPU level.

Network quality and capacity issues should be top priority for telecom operators. With increasing base (though not at high rate now), can create troubles for the operators if they not cope with the capacity and quality of their network.

Price war is hitting its lower limits; regulator must step in at this point of time to guide and confines cellular companies at a certain level.