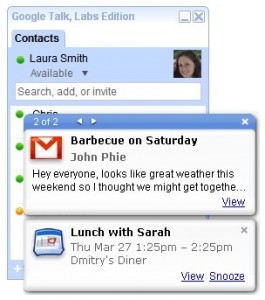 Most of Google Talk users complained that Google Talk doesn’t allow ‘Appear Invisible’, or ‘Appear Offline’ mode, a feature which almost any popular messenger program has got.

Many users were forced to use embedded chat feature on Gmail to remain in “Invisible Mode”, now they don’t have to as you can appear invisible using Google Talk with this Lab Edition of Google Talk.