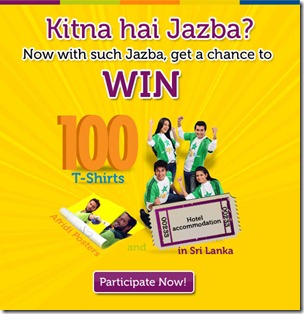 Marking the beginning of the cricket mania that is set to engulf fans all over the country today onwards, Mobilink Jazz is geared to revive faith and winning spirit we all need – a little faith can go a long way in motivating Pakistan’s cricket team. To kick start the revolution and have some youthful fun, Jazz brings the thrilling contest titled Kitna Hai Jazba?

Express your cricket fervor and show our team that you believe in them by simply joining the ‘Jazz Jazba’ fan-page on Facebook, count the number of times ‘Such Jazba’ appears in the inspirational Official “Jazba” Song launched by Mobilink Jazz (video also available on Jazz Jazba website and the Simply Mobilink channel on YouTube)

Answer the simple question – How many times, ‘Such Jazba’ is sung in the official Jazba song? and enter a chance to Win fabulous prizes including