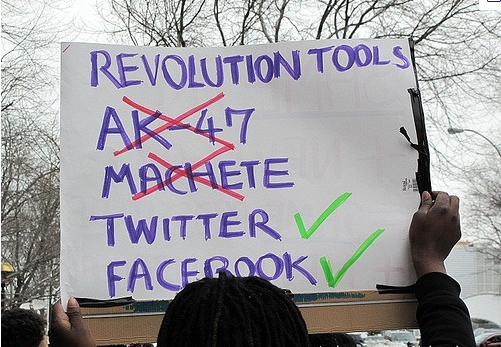 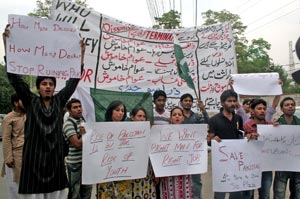 Power of media and specifically the power of internet is ever increasing in this era and one can never deny their fruitfulness as well as “effective” outcomes.

Starting from a simple advertisement, which mostly companies use for their business initiatives, can trigger countrywide campaigns that can shak the government in the roots.

Yes, the Egyptian and then Tunisian case is an example. Many of us are aware what happened actually and how the “social but virtual power” was used. Once again the famous web social giants were the platforms, Twitter and Facebook!

Most of the people were off the view that this idea, virtual group turning into a solid protest against government in reality, will soon be hitting other countries as well. It was earlier discussed in detail that whether the Social Media Revolution is Possible in Pakistan? and the first drop of rain has just jumped out!

Daily Times reported that there is a group of 150 friends which gathered virtually first, on internet are now protesting on the roads, for an Egyptian like cause. So this becomes the first protest of its kind in Pakistan and one can predict where may head towards, if properly carried out.

And not only this, almost half a dozen people from the group staged a protest in front of the Lahore Press Club yesterday. And literally the cause was the genuine one, ever increasing load shedding, inflations, poor economic condition and above all the foreign policies of government.

Talking about the campaign, Syed Haseeb Akhtar Rizvi, one of the leaders, said:

“Seeing the current deteriorating situation of the country, I took the initiative to launch a campaign named ‘Protest by students against corrupt politicians’ on Facebook last Monday.”

He said that he had gathered more than 150 like-minded friends on the Internet and they fully agreed with his initiative and endorsed the demonstration to bring about a change at the mass level.

Moreover, it is interesting to know that that most people among this group are young students, which shows youth is in the action as well.

Keeping it away from the political nature, as much as I could, we are hear to discuss the state of cyber world in Pakistan. We may soon be entering into a new era and anything at this moment will be pre-prediction infact.

But do you really think that groups like this will work in Pakistan keeping in view the present broadband penetration in the country, are we heading towards a change soon or they will be nipped in bud?