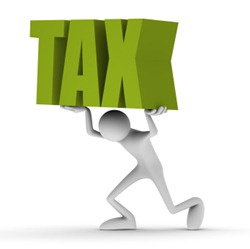 The cellular operators demanded the government to reduce the burden of high tax on the sector in order to increase the penetration of services to guarantee the revenues and employment generation.

The tax rate on cellular industry is not only higher amongst all different sectors of Pakistan but it is also comparatively huge as compared with different countries of the region including Bangladesh, Sri Lanka, India, Malaysia, Indonesia etc.

The tax rate on cellular sector has reached 31 percent in Pakistan whereas in other countries cellular taxes range between 10 to 15 percent. The FED on cellular services which is received in the mode of GST stands at 19.5 percent compared with 17 percent on different sectors.

The withholding tax rate on telephony services collected as advanced tax are set at 11.5 percent, which is maximum of 6 percent on rest of the sectors. Besides, the activation tax of Rs. 250 on each new connection is additional burden on all cellular companies.

The tax rate on cellular sector is a case of severe discrimination and should be brought down to a comparable industry level, Zafar Usmani, Chief Operating Officer Zong said.

The cellular industry in Pakistan is already an overly taxed sector, which pays double taxes as compared with other countries of the world, he said.

“If you look at the industry’s growth, it is not what it used to be and if we want to see another boom in the telecom sector we need to have lower taxes”, COO Zong suggested the government.

Minimizing the cost burden of operators who are willing to serve large areas could enable the rural populace to become a part of the mobile revolution at a faster pace and with greater ease.

The cellular companies are inclined to explore outside this framework as the market in urban and semi-urban areas is nearing saturation. This means going into low density geographical locations where revenue expectation and subscribers per cell site is much lesser making them a low revenue/low margin proposition. At the same time, it is very important to bring the critical mass residing in rural areas on board as these are the ones that stand to benefit most from cellular penetration.

Taxes on Telecom Services in Region 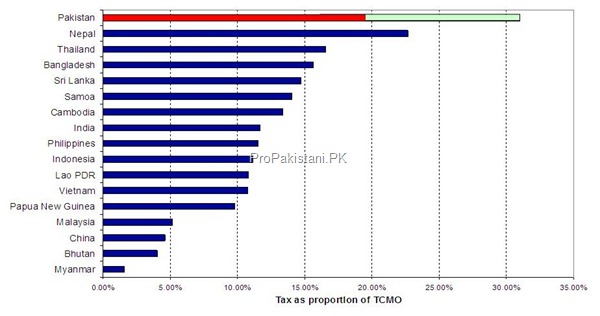 “Telecom companies, which are operating in highly competitive environment, have worked hard to make service affordable for masses of the country however, increased taxation negatively impacts the service cost, which has resulted in slow down in the industry”, said Aamer Izhar ul Haq – Vice President Corporate Affairs & Security

“The high taxation on telephony services is amongst the factors that has been negatively impacting the growth of the industry,” he said.

Telenor VP pointed out that telecom industry is the highest tax contributor and source for foreign direct investment in Pakistan. He suggested that a thriving industry will positively impact growth of the industry and will result in increased revenue generation over a longer term for the government.

Over the last few years, cellular penetration has increased significantly as the connections have already exceeded the 100 million mark. The new additions in cellular base came at a time when the market was considered saturated by most. these new subscribers are mostly from the low income group and were able to benefit from cellular technology because the activation tax was absorbed by the cellular operators in order to reduce the upfront cost to these new customers.

Moreover, there has been a lot of reduction in tariffs and call rates over the last few years to facilitate customers’ usage. Various consumer centric offers to further optimize spend were also launched such as Ghanta offers, bundle offers, reactivation promotions etc.

Contrary to this, over the last few years, GST has increased from 15% to 19.5% and Advance tax was also recently increased from 10% to 11.5%. These increases in taxes limit customers’ usage and reduce overall communication level of the customers.

Cellular Industry in the best interest of its customers recommends following: –