With the rise in popularity of twitter, came people who sought to take advantage of it. Celebrities like singers, actors and political personalities are among the most followed people on twitter.

So naturally they’re the first target of those who fake their profiles. Consequently, there have been thousands of cases in which celebrities have had to publicly disown fake profiles because they were spewing out fake information and what not.

An interestingly, in many cases, the fake profiles have more followers than the real celebrity profile. Naturally, confusion reigned and Twitter was forced to make a move after it was sued in the US over tweets made from a fake account. Twitter responded by rolling out a feature called “Verified Accounts” which adds a small blue tick mark next to the profile name and tells you that this person is really who they say they are.

This has gone some way into curbing the problem but many people are still duped into following fake profiles. Some people even follow these accounts because most of them tend to be quite entertaining in the stuff they share. However I’m not sure if I were be laughing if my account was faked.

Nevertheless joining the list of people who have had fake profiles created for them is our foreign minister Hina Rabbani Khar. She has been the talking point for a while in light of her recent visit to India.

Her fashion sense and accessories made more news than the actual visit and that’s what many of the tweets from the accounts focus on.

Ever since the first tweet, “Namaste tweeple, the Birkin has landed”, on the 1st of August, the account has gathered hundreds of followers. I must admit that the person who started the account apparently has a sense of humor.

"I’m a bird alright. A bird that will not be caged. Today FM, tomorrow… [cue evil cackle]".

And the background image of the profile is of a tiled Black crocodile skin Birkin bag, which was one of the top trending items on Twitter and the subject of discussion on the blogosphere a day after she met the Indian Foreign Minister S.M Krishna. The basic version of the bag in question, starts at a reported 7000 dollars so no wonder.

The operator of this account doesn’t seem to have financial motives, they seem to be doing it for the lulz as the internet says. But that’s not always the case. Many accounts gather followers, then tweet out links to increase traffic to the particular site. Others may even encourage their followers to check out “that great restaurant” or register for “that great site”.

There are countless ways how this can be exploited. So while this particular might be in jest, you should keep an eye out to confirm whether the celebrity you’re following has a verified account or not.

Don’t bother looking for Hina Khar’ real profile though because she isn’t on Twitter yet. The tweets from the account show no signs of abating, lets just hope that the person behind this account isn’t arrested for hurtful impersonation.

A few of the tweets from the account are: 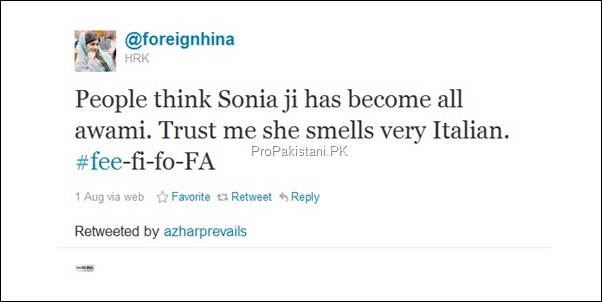