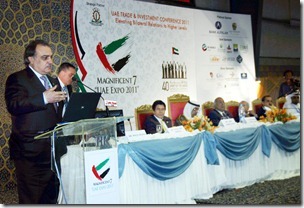 This statement from PTCL came at a time when government of Pakistan is convincing Etisalat, PTCL’s parent company, to extinguish an agreement according to which GoP can’t issue any telecom license till March 2013 as part of sale purchase agreement for PTCL’s 26 percent shares.

“We are going for 3G and we will be the first to compete for a 3G license, we have no option but to succeed”, said Mr. Irshaid, showing that company is keenly looking for 3G auction expected in next few months.

Mr. Irshaid said that today PTCL is not just a telephone company, but it is the integrated telecommunications company of Pakistan. He said that PTCL was the last company to enter Pakistan’s broadband market, and yet today it is the largest broadband provider in the country.

“This has been our transformation over the last 5 years,” said CEO & President PTCL. “We don’t just have a business plan; rather we have a mandate to bring broadband to five million people of Pakistan – a mandate given to us by our shareholders, our Board of Governors and our valued customers.”

However, they weren’t sure about the manner in which PTCL would buy 3G license. In fact Analysts are somewhat divided over possibility of PTCL going for 3G license separately and independently, while others opine that company might partner with any other cellular company to bid for 3G.