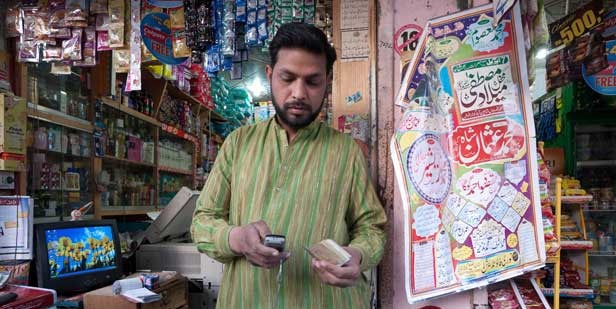 Pakistan has been declared as a breeding ground of innovation for branchless banking and has been successful in developing a variety of business models involving a wide range of players, including mobile network operators (MNOs), technology companies and even courier businesses.

The above two mentioned platforms won’t remain the only players as Habib Bank, Muslim Commercial Bank, Bank Alfalah, Askari Bank and TCS are soon to offer Branchless Banking services. It is also rumored that Mobilink might enter the branchless banking market very soon with a brand of its own.

The initial results of Easy Paisa and Omni have been encouraging with these two services having a combined daily transaction volume of over 175 thousand, with an average size of Rs. 3,700. Easy paisa claims to have processed over Rs. 43 billion worth of local bill payments and domestic money transfers in less than 2 years.

With only 12 % of the Pakistani population having bank accounts the catch of entering financial services is huge and lucrative but requires a lot of investment because conventional banks require heavy investment into building a branch network and structuring an infrastructure.

A survey conducted CGAP to gauge the effectiveness of Branchless banking and to determine that what were the income levels of the people who were using this service showed that 41% of the Easy Paisa users (respondents) lived on less than $ 2.50 per day and 69% of the customers lived on less than $ 3.75.

This clearly shows the popularity of EasyPaisa or branchless banking platform among people who are in a lower income cadre. This also points towards the fact that this banking platform which relies heavily upon technology has attracted people with no educational background. Its technological dependence or its introduction of a completely new way of executing transactions has not pushed users away from using it.

According to State Bank of Pakistan (SBP) statistics there are 5.06 branches per 100,000 individuals. The international global median is 8.4 branches per 100,000 users. In order for Pakistan to achieve this median Pakistan needs 5,517 branches opened every year, that highlights and increase of 66% in branch network every year consequently representing a huge investment cost & maintenance cost for the banks.

Another way to look at this problem is to look into the Mobile user’s growth in Pakistan which has gone from 35 Million users in 2005-06 to 100 Million users in 2009-2010. This exponential growth presents an opportunity to combine cellular services with a banking platform so that banking services can be extended to the masses of this country.

Security: Transaction security is important for the customers and for the future existence of the service

Ease of Collection: Service provider has to ensure that its network is available everywhere. The cost of setting up a Branchless banking network is significantly lower than setting up a conventional branch thus providing a huge opportunity in setting up a network

Ease of Use: The service should be easy to use so that the general public can easily adapt it an utilize it for their benefit

Speed of Transfer: Transfer mechanism should not only be secure but should also be fast.

Cost of Service: One of the most important factors, the cost of using this service should not be unreasonable and should not force people into using the conventional banking mechanism, which in some cases might not be available. The role of State Bank Pakistan in regulating these charges is pivotal.

The potential of branchless banking is immense and can single handedly light an economic revolution is Pakistan. In addition it can enfuel e-commerce and the concept of o-conomy (online economy) in Pakistan.

Online businesses combined with mobile banking can achieve same kind of wonder that has been demoed by credit cards and online sellers in the west. with less than 0.07 percent penetration of credit cards, and only 0.015 percent of Pakistani population using it online, mobile banking has a future in Pakistan beyond limits.

Branchless banking can be used as a medium of payment between:

The Policy Formulating Bodies, State Bank of Pakistan, Commercial Banks, Cellular Carriers need to sit down and formulate as to where do they want to see this service in the next 15 to 20 years. All the stakeholders need to sit together and carefully asses this opportunity that has come our way and need to ensure that we make good use of it.