As we had anticipated, Mr. Rahman Malik, head of Interior Ministry, has taken back his statement for blocking prepaid SIMs, and has now announced that only un-identified or unregistered SIMs will be blocked. 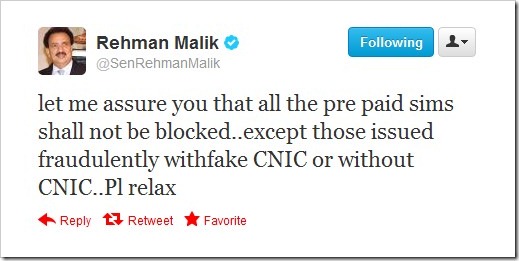 Earlier, Mr. Rahman Malik had hinted that blockade of prepaid SIMs was being considered as an option as Mobile Phones have become the biggest weapon of terrorists in the country.

Mr. Malik said that a transparent policy would soon be introduced for the issuance of prepaid SIMs, adding that no action would be taken that could cause inconvenience to the general public.

It maybe recalled that Mr. Malik, through PTA, had directed all cellular service providers to shut down services in Karachi, Lahore, Multan and Quetta. Afterwards Interior Minister had said that Blockade of mobile phone services was of benefit and that the government is considering to completely eliminate prepaid SIMs.

It maybe recalled that government entirely relies on cellular companies (without any check and balance) to identify and ban un-registered SIMs and this has been done several times before. However, the issue of unregistered SIMs remain unresolved.

To conclude, in response to blockade of prepaid SIMs, ProPakistani had said following a few days ago:

Every 4 to 6 months, Rahman Malik comes in and issues statements for curbing illegal SIMs, in response to which PTA blocks few million SIMs and that’s it. Everyone gets back to their lives – leaving the problem there as it is.

I am confident that this time too PTA will block few million SIMs and then everyone will get to their routine work. Un-registered SIMs will remain there as they are.