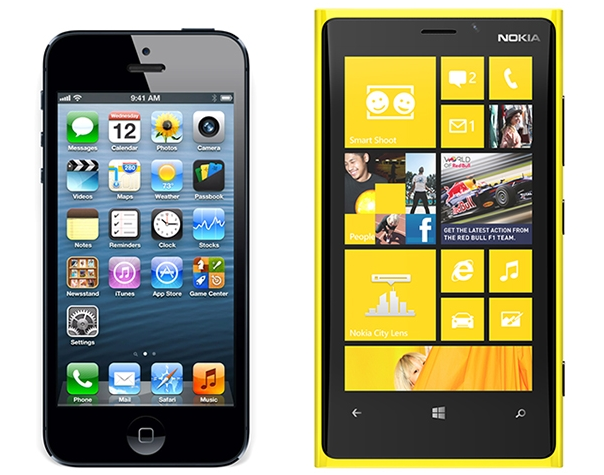 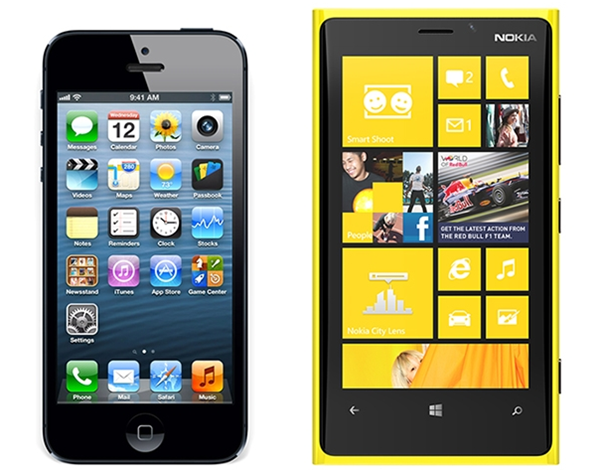 Since the curtain was raised for sixth generation iPhone 5 and new Nokia Lumia 920 by Apple and Nokia respectively, the worthy competition has been witnessed between these tech giants. The discussions are warming up the tech environment as what’s the best between these two either the iPhone 5 or Lumia920.

So, here we present you features for both devices which will make you easy to decide for which innovation to go with.

First walk through the specifications for both the super phones: 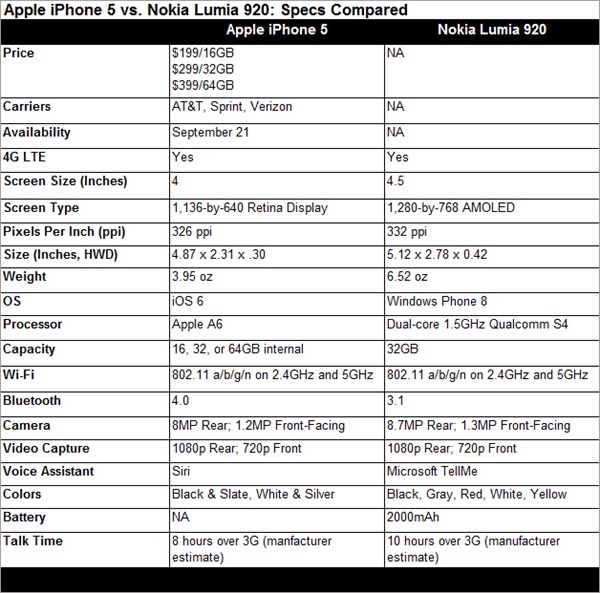 Apple claimed the iPhone5 to be the thinnest and lightest iPhone yet with stylish aluminum and glass body and is available in staple black and white color cases. While on the other side, the Windows 8 wonder, Nokia Lumia 920 looks bright and fresh and is available in different solid colors that will match the mood and lifestyle of the users.

It might be said that its looks are adopted from Lumia 800 as it has solid one-piece polycarbonate body with rounded edges.

As mentioned above that iPhone5 is the lightest phone ever in the series, it is weighing just 112 g, but on the other hand, Nokia Lumia 920 is quite a bulky phone weighing 180 gm.

Finally, Apple has made a change to its prehistoric screen display of 3.5 inch screen and put a 4 inch screen display for its iPhone5. This new screen has 1136 x 640 pixel resolution with pixel density of 326 ppi and 16:9 aspect ratio.

However The Nokia Lumia 920 is equipped with a slightly bigger screen of 4.5 inches and has 1280×768 pixel resolutions that are approximately as 16:10 aspect ratio. Lumia 920 has 332ppi pixel density and sports an IPS AMOLED screen with an anti-glare filter which gives Lumia an outstanding clarity. Due to enhanced screen display of Nokia Lumia 920; it could be applauded by admirer of big screens.

Although Apple has kept some of the specification of iPhone 5 under wraps but it had been guessed that it would be a dual core chip and is powered by the new A6 processor. This chip is 22 percent smaller than the previous A5 in the iPhone 4S, but is twice as fast and doubles the graphics performance of its predecessor.

On the other side, Lumia 920 is equipped with 1.5GHz dual-core Qualcomm Snapdragon S4 chip, backed by 1GB of RAM.

But it is still left to see that how fast the apps would load or the games would run on iPhone5 as compared to Nokia Lumia 920.

The sixth generation iPhone 5 is run by the new iOS 6 embedded with new amazing features. Nokia Lumia 920 is powered by the new Windows Phone 8 but as the OS has still not been released, so we are still unclear about all the features it will boost. But it has been speculated that Windows 8 would allow third party developers.

The iPhone 5 will feature Siri for voice assistance, while the Lumia 920 uses Microsoft’s less-heralded TellMe. By far, iOS6 in the iPhone5 will give its users a smart Twitter and Facebook integration and the new Map app is wonderful.

The iPhone 5 is equipped with iSight, 8-megapixel camera with an impressive back-illuminated sensor and precision-engineered lens, including the stabilization and new panorama features.

However, Nokia Lumia 920 is powered by Nokia PureView camera with 8.7 MP sensor and optical. According to Nokia, the Lumia 920 features a floating camera lens that that surpasses the optical image stabilization system of most digital SLRs, and it can record full HD video in 1080p. With this Lumia 920, Nokia has also gone a further mile to add features to the 920′s camera app including augmented reality with its City Lens.

Lumia 920 is giving its users 32 GB with its 7 GB for free with a Microsoft SkyDrive account which would satisfy stuff lovers completely. While on the other side, iPhone5 comes in 16, 32 and 64GB alternative without the possibility of adding more memory to it.

For the iPhone 5, Apple is promising strong battery life up to 8 hours of 3G talk time and 8 hours of LTE browsing and on standby; it will last for 225 hours on a single charge.

However, Nokia Lumia 920 gives its users 2000 mAh battery which would give up to 10 hours of talk time over 3G. Moreover; the device has built in apparatus to support wireless charging.

Although Nokia took the wraps off the Lumia 920 a week earlier than Apple unveiled the iPhone 5, but the Lumia 920 is still without a price or a release date. This release of Lumia device will probably happen around Oct. 26, when Windows releases its other Windows 8 operating systems.

While Apple confirmed that the iPhone 5 will hit the Apple stores on September 21 after which we will be able to confirm you the price in local market. Both the devices are not going to cost anything lesser than Rs. 60,000.

Seeing all the features by these devices, it would be difficult to reach at certain decision. So, the discussion should keep open ended. Based on aforementioned features, one could get iPhone 5 as a better choice in terms of specs and features, but for sure Nokia Lumia 920 is a perfect alternative to Apple iPhone 5 considering its powerful operating system.