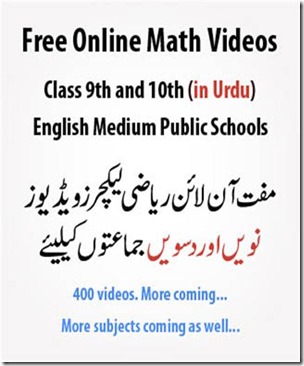 Sabaq.PK, a team of developers and professional teachers, is a non-profit organization out of Islamabad aimed at educating Pakistani students with online videos.

Starting with Maths, Sabaq.PK has over 400 videos of Mathematics courses for several Pakistani boards.

Sabaq.PK, launched just a week ago, told ProPakistani that they follow academic text books – index of which is available on the website – with video tutorials of all the chapters explaining every kind of detail required by students to understand and comprehend their lessons.

Sabaq.PK told ProPakistani that they are aggressively releasing new videos every day, but their current focus will remain on Maths for 9th and 10th class with more subjects to be covered in coming days.

They have plans to add Physics, Chemistry, Biology, English, and other subjects and also cover 7th class, 8th class, 1st year, and 2nd year classes. Sabaq.PK says they will keep the video tutorials in Urdu to make sure that majority of Pakistani students get benefited with them.

Currently they are hosting videos on their own servers, however, Sabaq.PK intends to use YouTube and other other channels to accommodate increasing traffic in coming time.

Sabaq.PK said they are planning to bear operational costs through advertisements and external funding.

With increasing penetration of internet, such online ventures can be handy for students who want to get additional help for their academic needs. If perused well, Sabaq.PK can replicate the success story of Khan Academy in Pakistan. Not to mention, the potential for such a service is huge, in addition to countless benefits for the society.