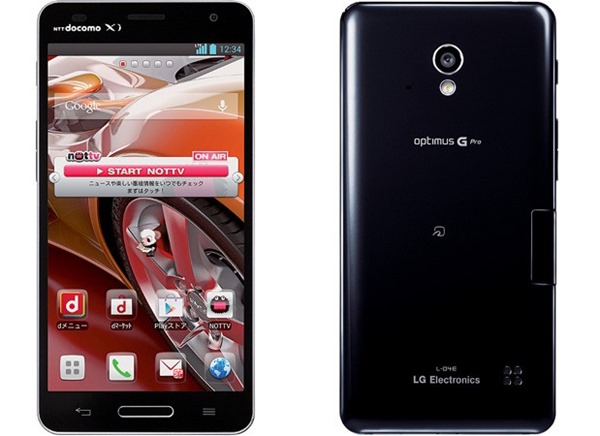 LG has just unveiled its response to its competitors namely the new Xperia Z, iPhone 5 and Samsung GSIII in the new Optimus G Pro. The new flagship follows the new trends of the market by offering features like a Full HD display and a powerful hardware.

Apparently, this device is approximately 1.5mm thicker and substantially bigger than the original Optimus G .

LG Optimus G pro seems to measure 139x70x10 mm, weighing 160 grams and is likely to come in two colors of black and white.

Inside LG Optimus G pro, there is a faster 1.7GHz quad-core Snapdragon S4 Pro with 2GB of RAM and 32GB of storage with a microSD card slot expandable to 64 GB.

On board, there’s a 13.2-megapixel shooter with BSI sensor and LED Flash for better low-light imaging and a 2.4 MP front-facing camera

LG is promising strong battery capacity of 3000mAh for this flagship as compared to the LG Optimus G.

Further, Optimus G Pro is packing a few new software enhancements along with Jelly Bean. Small widget like apps LG is calling “Slide Apps” that can be summoned atop other apps like shortly announced Xperia Z.

So far, there is no information on price and international availability for this device but it has been expected that it will make full appearance at Mobile World Congress next month

No international availability and pricing details are out yet but you should expect to see LG Optimus G pro in MWC this february. We’ll get further details then and also the answer to the question whether this phone can compete with the current and future Android flagships or not. Reaching conclusion, until then will be useless.