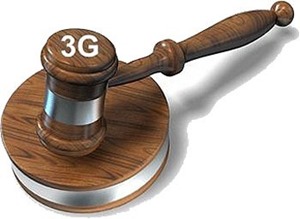 The consultants hired by the Pakistan Telecommunications Authority (PTA) to auction the 3G mobile phone licenses have engaged lawyers to take legal action over the non-payment of their fees, said a joint statement issued by the consultants.

Dr. Rob Nicholls from the Australian law firm Webb Henderson; Dennis Ward, the former spectrum auctioneer for the Canadian Spectrum Management Program; and Martin Sims from the spectrum specialists PolicyTracker; were given three month contracts by the PTA — starting from 23 November 2012 – for preparing the Information Memorandum and then the procurement of 3G licenses in Pakistan.

Three consultants are now claiming that they had completed more than half of the assigned work at their own expense – including a lengthy stay in Pakistan – before they came to know about the termination of their contracts through media.

Consultants say that PTA didn’t confirm the cancelation of their contracts until January 14: two weeks later.

It maybe recalled here that Dr. Khawar Siddique Khokhar, in a letter written to Principal Secretary to the PM, the cabinet secretary, secretary information technology, had termed the hiring of three consultants for 3G auction as illegal, in violation of telecom and PPRA rules and without the knowledge (and approval) of authority.

Later on the issue of hiring of consultants was taken to other authorities and eventually the contract was terminated. However, as claimed by the consultants, no payment was made to consultants as the regulator had agreed in the contract.

The consultants were given individual cheques by the PTA for 10% of the agreed fee, but on cashing these cheques discovered that the PTA had stopped them.

“This is cheque fraud, pure and simple, and punishable by a jail sentence under Pakistani law,” said consultant Martin Sims.

“This is disgraceful behaviour from a public body, which should be maintaining an exemplary reputation, not damaging Pakistan’s name at home and abroad.”

The consultants claim that they have incurred substantial personal expenses and not been paid a penny for the work they have done. They say that despite numerous attempts to contact the PTA no one has been willing to talk to them.

The three international experts have engaged Bhutta, Khan and Mir to recover the money. “There are many legal options available to us and we will be pursuing each of these in turn until the money we are owed is paid,” said Rob Nicholls, one of the consultants.

The contract cancellation letter sent by the PTA was “ridiculous”, said Dennis Ward. It claimed that the contract was void ab initio, a legal term meaning invalid at the outset. “That is something only a court can decide,” said Ward. “The PTA is legally obliged to honour contracts, it can’t appoint itself judge and jury and suddenly decide to pull out.”

The forthcoming legal action means the PTA is liable not only for the unpaid fees but also for the legal costs associated with the case. “The PTA is being cavalier with public money,” said Rob Nicholls. “Instead of adopting this ‘head in the sand’ approach it should make an arrangement to settle its debts and bring us back after the election to complete the auction.”