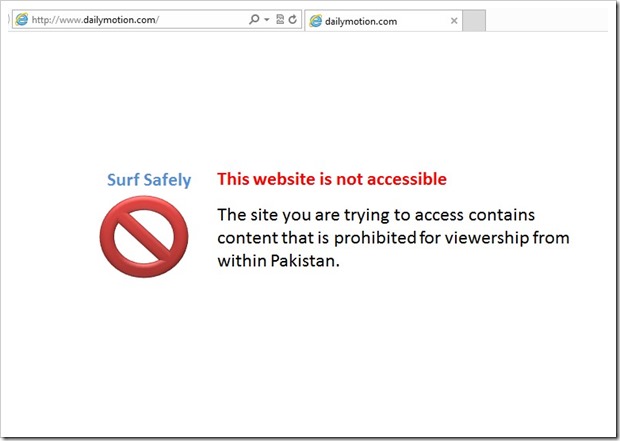 DailyMotion, video sharing website of global repute, is partially inaccessible to internet users in Pakistan. Various reports coming to us from readers, mainly from Karachi, confirm that they were greeted with “safe surf” message when they opened DailyMotion today morning.

However, there were other users who said that website is opening fine on their side.

It merits mentioning here that this is not the default censorship message that appears on YouTube on other websites that are blocked in Pakistan. PTCL and other ISPs aren’t confirming anything yet.

It maybe recalled that there are countless websites blocked in Pakistan without any apparent reason. In past, Pakistan Telecommunication Authority had blocked websites based on personal and political interests.

Masses have been demanding the authority for long to make public the list of blocked websites, with reasons explaining the blockade and possibly a way to report invalid blockades.

We are in process of getting more information on inaccessibility of DailyMotion and will update this story as we get more details.

It appears that DailyMotion is again accessible for majority of Pakistani internet users.