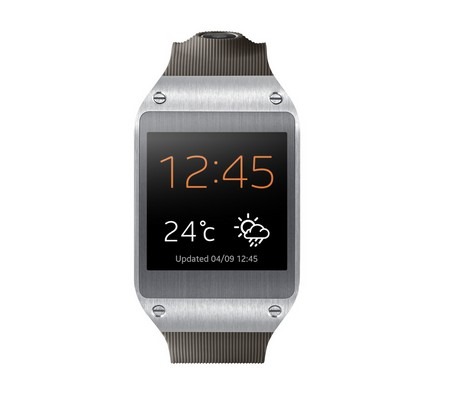 Contrary to what many people would’ve initially thought, Samsung is not new to the Smartwatch business. It has actually made some high-tech watches so the Galaxy Gear is not an experiment. It’s still high-tech however the watch is already getting negative reviews from around the web.

The watch display measures 1.63 inch in size and has a 320 x 320 resolution meaning pixel density of 277ppi. It uses Super AMOLED technology. Unusually for a Samsung device, the Galaxy Gear will not run Android.

It pairs with your phone via Bluetooth 4.0 and after that, will be able to take calls. That’s very James Bond-like but it will still look quite bizarre. The upper strap features a 1.9 megapixel camera with BSI Sensor and 720p video recording.

Under the hood, the watch comes with an 800Mhz processor, 512 MB RAM and 4 GB non-expandable storage. The whole package weighs just 73.8g.

The 315mAh battery is enough for making the watch last for a bit over a day. Using a feature called Auto Lock, it instantly locks your phone as soon as the paired device goes out of range, i.e. more than 1.5 meters away. Another feature called Find My Phone does what it’s supposed to be doing by via ringing, lighting up or vibrating.

It will be compatible with only the new Galaxy Note III and Note 10.1 2014 Edition at launch but support for the Galaxy S III and Note II is coming in the next few months.

The Galaxy Gear will launch with 70 apps at launch which includes Evernote, Pocket, Path, eBay and more.

The watch will be available in 100 countries around the globe for $299 and in 6 colors this month.