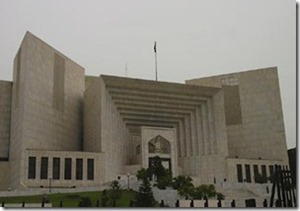 Supreme Court of Pakistan has rejected government’s request for more time for appointment of Pakistan Telecommunication Authority Chairman and Members and ordered the federal government to make appointments on priority basis with-in next 10 days.

Three-member bench headed by Justice Tasaddaq Hussain Gilani resumed hearing of case regarding auction of 3G licenses in which the government had requested further time for appointment of Chairman PTA and its members.

The Supreme Court rejected the petition with the direction that appointment of Chairman and members of PTA should be made with-in 10 days.

The Justice remarked that it is regrettable to say tremendously valuable institution of PTA has been made ineffective and paralysed by the negligence of high officials and management.

The court already has awarded vast time to the government and now the time is over as national exchequer is facing heavy loss due to non appointment of its Chairman, the Justice concluded.

It merits mentioning here that Supreme court of Pakistan – during last hearing– had ordered the federal government to appoint Chairman and members of Pakistan Telecommunication Authority before September 16th, 2013 and to make necessary arrangements for the auction of 3G licences with-in next 60 days.

Government, which had clearly missed the deadline, wanted at least one month for the appointment of Chairman PTA.

Auction of 3G licenses will only be possible after the appointment of Chairman PTA and members.