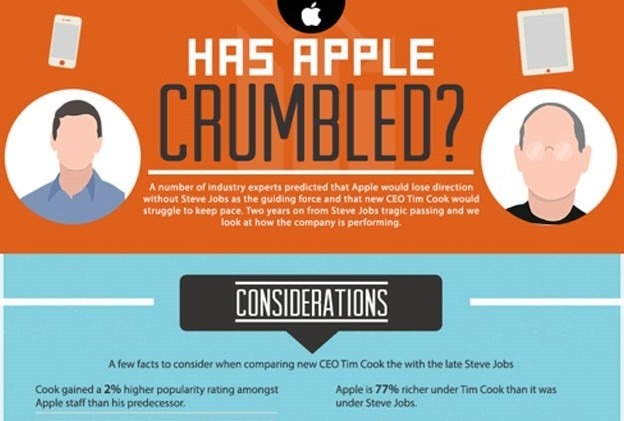 Apple may have spent two years without its popularizing co-founder Steve Jobs, but how successful has it been during all this time? The answer: much more than ever.

A detailed infographic by Cool Infographics compares the situation of before and after and it is clear that Tim Cook has been handling affairs quite steadily.

Firstly, it is quite clear thanks to some staggering numbers that Apple has a lot more money than before. In simple numbers, 77% more.

Secondly, it is a lot more charitable than before. Cook is also more readily accepted by his staff, 97% of them compared to Jobs’ 95%.

Then it’s the stock price. From the time Jobs took over till his death, Apple’s share prices climbed by a colossal 9,638%. Under his successor’s tenure, it grew by a further 23% more than what it was before.

It still lags when it comes to market share and earning first-time customers but still more people switch from an Android to iPhone than the people who do otherwise.

A lot depends upon its future when it comes to the innovation factor.

Under Jobs, Apple churned out a game-changer 3-6 years so if an iWatch makes an arrival in 2014, that streak might continue in the future.