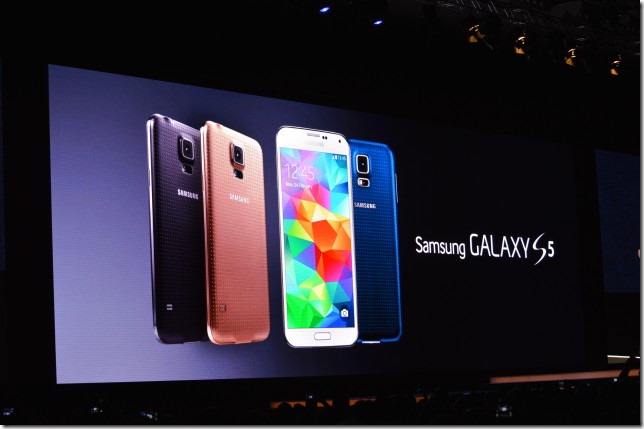 Oh boy. If you had asked us a few hours back whether Samsung, the world’s largest phone-maker, was going to announce its next flagship today, we would’ve said “Heck no”. But believe it or not, its here and alive: the new Galaxy S5.

Quite remarkably for a Samsung flagship, the phone comes without a lot of hype. Samsung didn’t do much to build it up either as they probably knew that there aren’t really a lot of earth-shattering features in here.

The biggest head-turner in the new phone is the design. Gone are the slippery, cheapish polycarbonate plastics of the past, welcome the new “modern glam” look. The perforated, dimpled back is similar to the first Nexus 7 and is quite an improvement over the Samsung phones of yesteryear.

It is still made of a leather-like material like the Note 3. Surrounding the phone is the same metal-imitating silver plastic. The phone itself will be available in four colours: Black, White, Gold and Blue.

Another quantum leap in the Galaxy S5 is the IP67 certification, which means the phone is water and dust-proof. The front, apart from carrying the display, has a home button with an integrated finger-print scanner built-in.

The display of the Galaxy S5 is a larger by 0.1″, to 5.1″. It is still a Super AMOLED panel and carries the same 1080p resolution which means it is almost the same as last year.

While latest rumours suggested a QHD panel, Samsung obviously thought it was necessary. We might’ve grimaced but Sony too has used the same resolution in the Xperia Z2.

The most-intriguing feature of the front is the finger-print scanner. Just like Apple’s TouchID, it is built-in straight into the home button. Swiping the finger over it unlocks the phone. It is implemented in phone unlocking and further into the phone, where you can add insert the feature to keep other people at bay.

Samsung has even partnered with PayPal to allow users to make online payments via the scanner. We don’t know much more about it so we’ll update if something comes up.

Being a flagship phone, you naturally think that the phone will come with beefy hardware and you’ll be right in doing so. The new Galaxy S5 comes with a Qualcomm Snapdragon 801 processor with four Krait 400 cores clocked at 2.5Ghz and an Adreno 330 GPU.

Internal storage will be either 16 or 32 GB, which means the 64 GB version is axed this time. It will of course be expandable via a microSD card of up to 128 GB. (In case you wanna know, SanDisk announced those earlier at the MWC and they cost about 145 Euros a piece.)

The former is the second most-advanced processor which Qualcomm makes after the 805. Apart from that, the phone also comes with the new Wi-Fi 802.11ac, NFC, Infrared and the new microUSB 3.0.

4G LTE-advanced is supported and the phone can provide speeds of up to 150 Mbps. It also comes with a new feature called “Download Booster” which combines the speed of Wi-Fi and data connection to provide ultra-fast network.

Galaxy S5 comes with a new 16 megapixel camera at the back, with LED Flash. The camera provides the fastest autofocus of any smartphone camera right now, thanks to the new Snapdragon 801’s image signal processor.

The camera also shoots 4K videos at 30 frames per second this time. And as is mandatory with Samsung, there are a few bonuses bundled along too. The first and foremost is the new HDR, which makes photos look more striking and natural.

The second, is Selective Focus. This is a thing commonly seen on advanced cameras. It allows you to sharpen only the parts of the image that you want, blurring the rest of the snap.

We know that Samsung’s phones come full of hated bloatware and a heavy skin but this time, things are less intense.

The phone comes with Android 4.4.2 KitKat pre-installed. The interface is a bit flat and simpler, with less menus. It still comes with Samsung’s S-branded apps but it is a bit cleaner look and definitely a welcome change, though, we would’ve liked a bit more.

Samsung clearly intents in making this phone the one-stop to all your fitness needs. The S5 is the world’s first phone with a heart-rate sensor, which it has on its back. It also comes with an updated S-health app which syncs with Samsung’s Gear and Fit devices.

Not many companies have announced flagships up till now, except for Google with the Nexus 5 and Sony with the Xperia Z2. The S5 faces stiff competition from both and unfortunately doesn’t come with a lot of distinguishing features.

If you’re a Samsung exec or fan, its easy to say that today wasn’t the best day of your life. The reaction to this announcement has been decidedly underwhelming, with many people questioning the lack of innovation factor in the phone.

Of course, you could’ve said the same thing about Sony’s flagship which isn’t exactly ground-breaking but unlike Sony, Samsung is a front runner. It is the company after all which embraced HD and Full HD displays with open arms and is known to experiment and implement. What happened now?

Ultimately, the most-puzzling thing is that the Galaxy S5 can’t be declared the best phone that Samsung makes right now, as the Note 3 is ahead in a number of ways. The Galaxy S5, then, is while a respectable addition to the company’s flagship lineup, not exactly properly distinguishable.