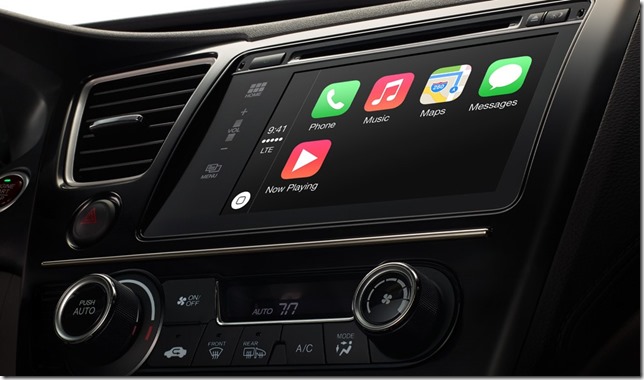 Apple today announced CarPlay at the 2014 Geneva International Motor Show to answer to Google’s Open Automotive Alliance and the lot.

With CarPlay, you connect your iPhone (5/5s/5c) with your car, then using either the knobs on your dashboard, the touchscreen (if your car has one) or voice controls to interact with it.

CarPlay initially supports a few basic functions, such as voice calling, GPS-tracking, texting and music playback. A few apps such as Podcasts and Spotify are also supported.

Of course, Siri will be there to lend a hand.

The first cars to come with Apple’s CarPlay will be manufactured by Honda, Ferrari, Mercedes, Volvo, Jaguar and Hyundai.

Future partners include Toyota, Suzuki, BMW, Mitsubishi, Nissan and Kia amongst several others.

“iPhone users always want their content at their fingertips and CarPlay lets drivers use their iPhone in the car with minimized distraction,” said Greg Joswiak, Apple’s vice president of iPhone and iOS product marketing.

Looks like Apple will face tough rivals in your dashboard as well. Google’s Open Automotive Alliance is already up and running with partners like Honda and Audi and the first cars on it should be released by the end of this year.

Ford has a known relationship with Microsoft in this field but, quite remarkably, the company ditched the silicon valley giant for a company panting for breath: BlackBerry.

Perhaps the biggest competitor of all of these companies will be Tesla, the innovative automobile maker which already incorporates a giant 17″ display in every car it sells, running Linux-based UI.

BMW’s infamous iDrive, which has seen a few improvements in the near past can also prove troublesome.

Cars with Apple’s CarPlay should hit the market later this year. Of course, availability in more mainstream cars can take a bit of time.

Believe it or not, the battle for your dashboard has also started and your next car will probably come with more advanced bit of gadgetry.

Whether you choose an Android or an iOS-running car is up to you.