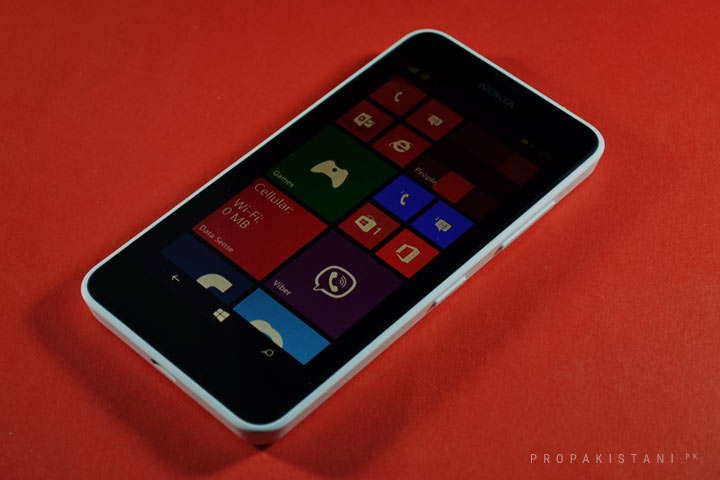 Lumia 630 was also the first device to run on Windows Phone 8.1 platform when it was announced a couple of months ago.

We’ve got the dual SIM variant of this device for review, although both versions are same at the outside, but this one comes with an extra SIM slot and that’s the only difference. So let’s begin with the un-boxing of this device:

This phone is made of plastic and has a very minimalistic design. The familiar characteristics of Lumia lineup can also be seen in this phone and like always you’ll get an option to choose from several bright colors. We’ve got the white color phone and it has a matte finish, good thing is that smudges are nearly invisible on this one.

This phone is very compact and the size is just perfect for everyone, It is almost 5.10 inches tall, 2.63 inches wide and almost 9.2mm thick. The rounded corners not only make it look a little slimmer but provide excellent grip. 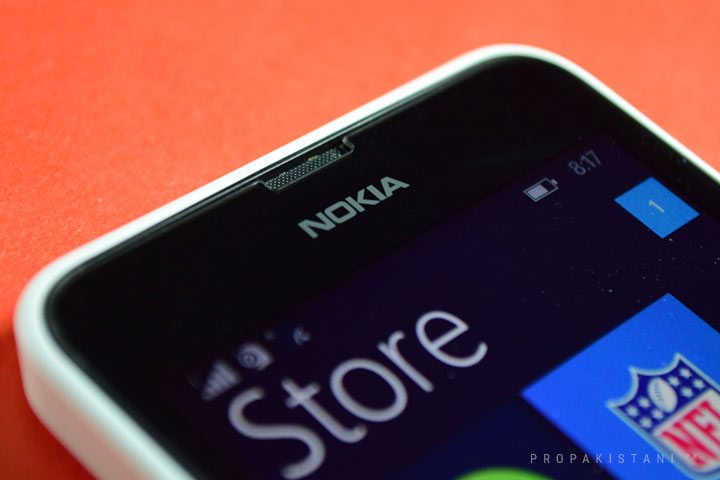 Lumia 630 offers a 4.5-inch ClearBlack IPS display with a 480×854 pixels resolution (which converts to a pixel density of 218ppi). Obviously you can’t compare this to the more advanced 1080p or 2K screen resolutions, but Windows Phone OS has tiled interface instead of icons, so the resolution is quite reasonable. Other than that the screen looks sharp and the viewing angles are also good.

Unfortunately this phone lacks the ambient-light sensor, which means that the brightness won’t set automatically and you will ha’ve to change it manually to meet your lighting requirements. This could be real annoying if you have to move from indoors to outdoor more often, but now the notifications drawer hosts a tiny toggle for brightness, so it shouldn’t be a problem. 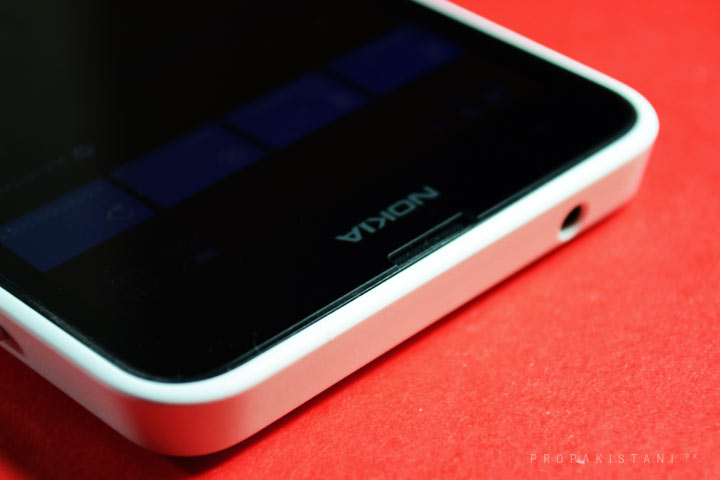 There’s is no front camera on this device and the ambient-light and proximity sensors are also missing, so above the screen you’ll only find the Nokia logo and ear speaker.

The touch keys below the screen are also gone, not gone exactly but embedded inside the software. So you get a lot of black space below screen for no reason at all other than there’s a microphone near the bottom. 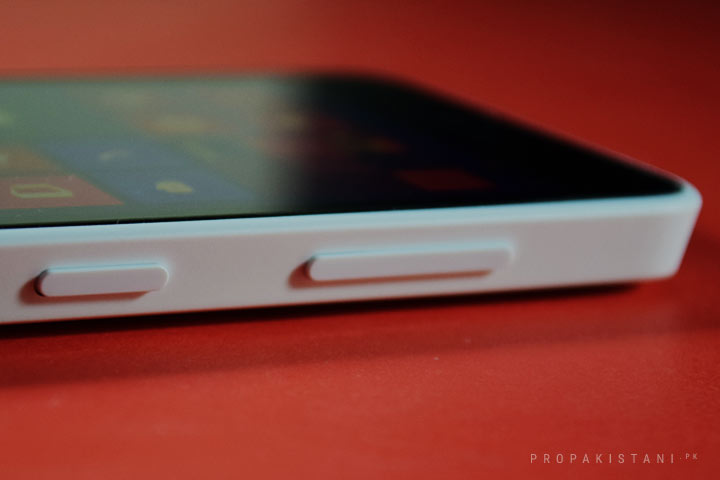 As usual the USB port is on the bottom and 3.5mm headphones jack is on the top.

Power and volume keys are on the right and there’s nothing on the left. This phone also lacks a dedicated camera key, something nearly all Lumia phones have. 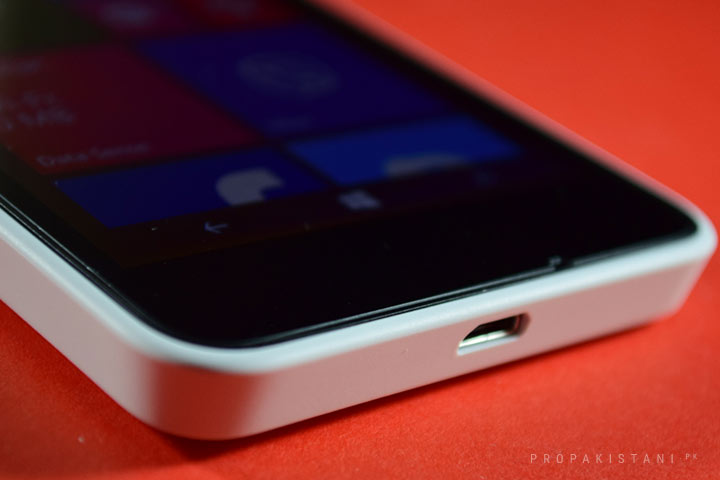 On the back there’s a 5-megapixel snapper without an LED flash, so don’t think about taking pictures in dark. A tiny speaker hole sits near bottom and a very faint Nokia logo is in the middle. 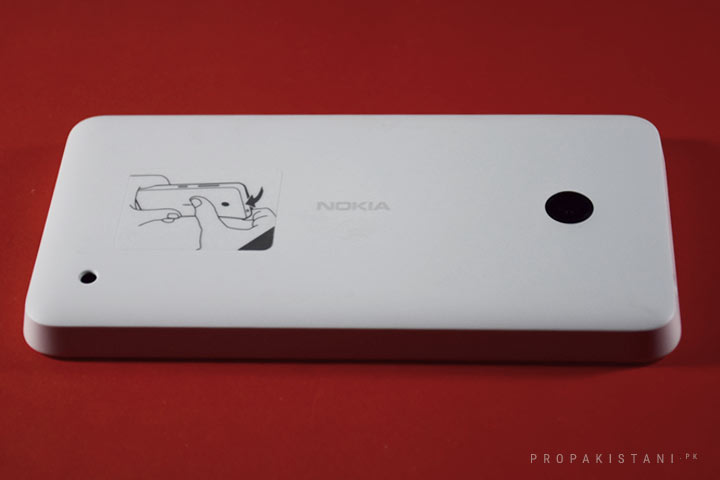 Peeling off the back cover could be tricky, but if you start from the top it will take just a second. Under the hood, there are two micro-SIM card slots, a microSD card slot and the battery compartment. 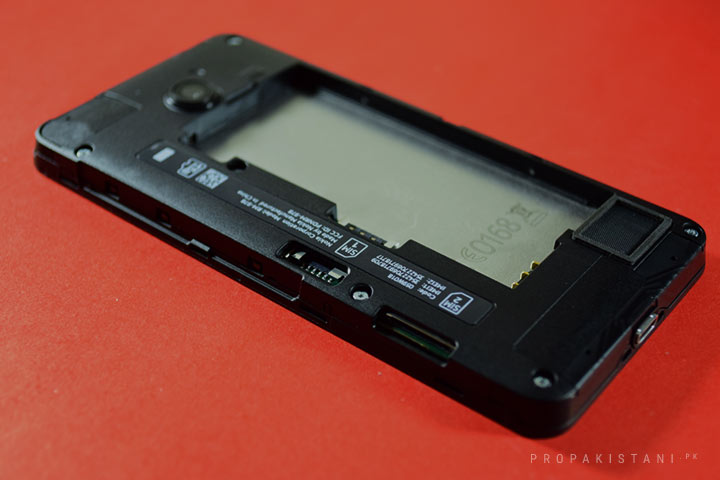 Lumia 630 is powered by Qualcomm Snapdragon 400 chipset, a quad-core processor clocked at 1.2GHz and Adreno 305 GPU. Just like its predecessors this device packs 512MB of RAM and 8GB of internal storage. You can also use a microSD card upto 128GB with this device. 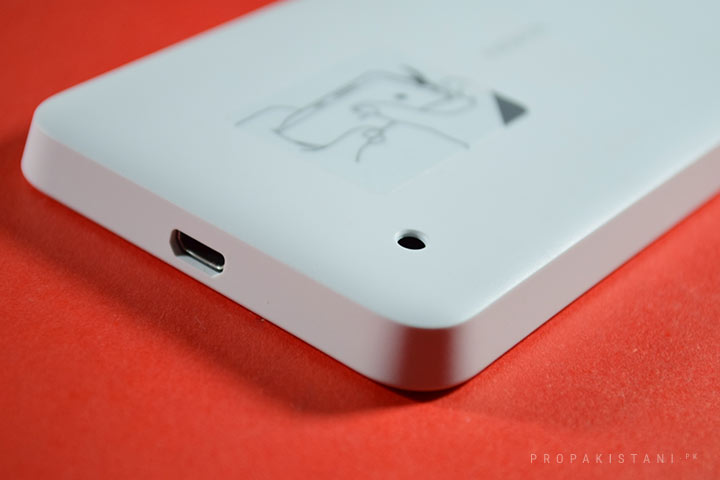 These specs are nothing extra-ordinary, but as compared to Android phones with these specs and price range, Lumia 630 provides a smooth, lag free experience. You can enjoy most of the resource hungry applications and games on this device without any problem.

Have a look at some of the benchmarks below: 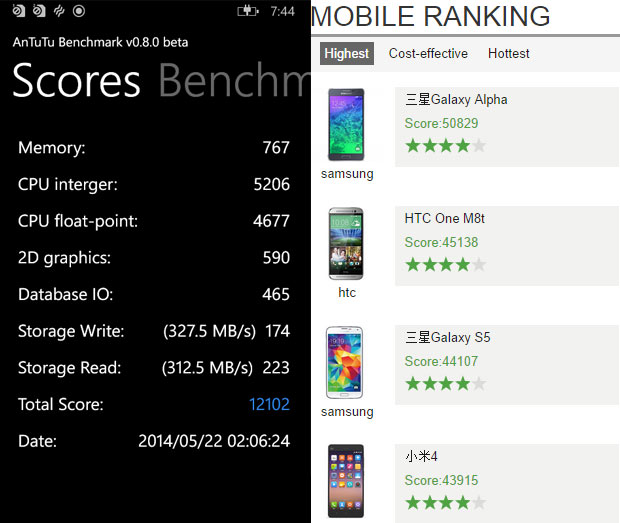 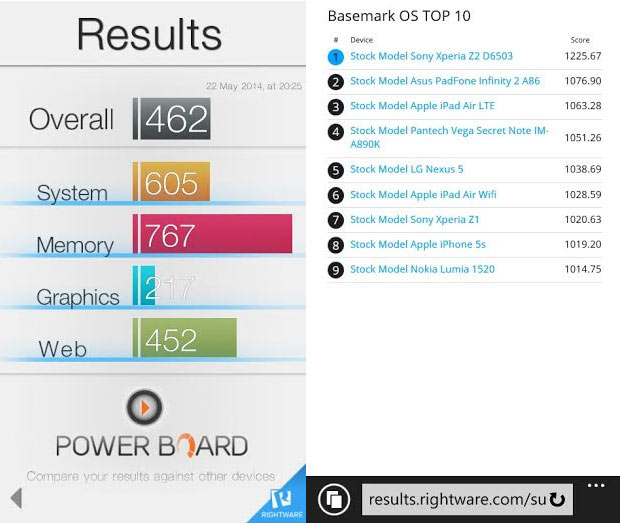 Lumia 630 is the first official Windows Phone 8.1 device and it comes with Lumia Cyan, which not only enhances its functionality but also brings a plethora of Nokia applications.

Most of you folks would be familiar with the Windows Phone operating system; a tiled interface and a list of apps on the homescreen. 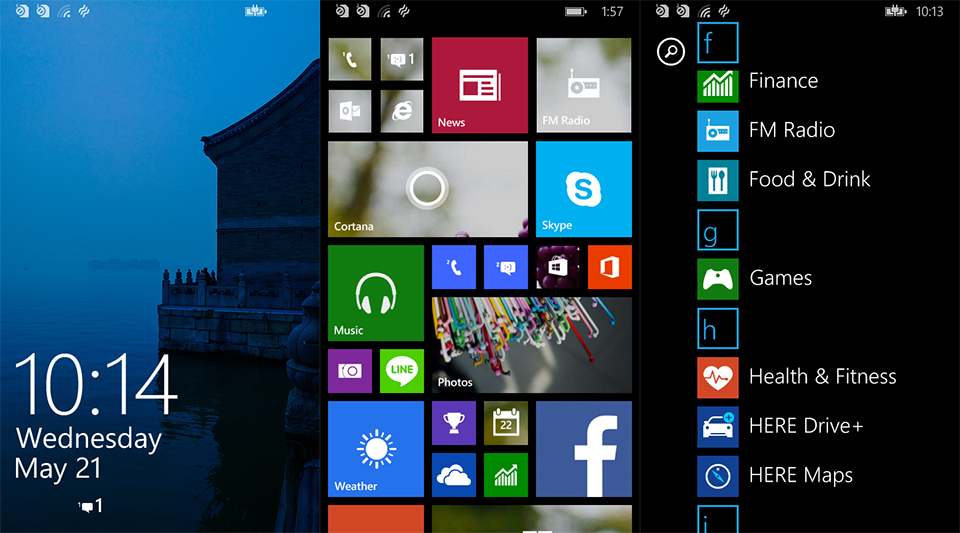 There’s isn’t much difference in Windows Phone 8.1 and the previous release in terms of user interface, you’ll get the same UI, though now you can set a wallpaper and add more tiles in a row. 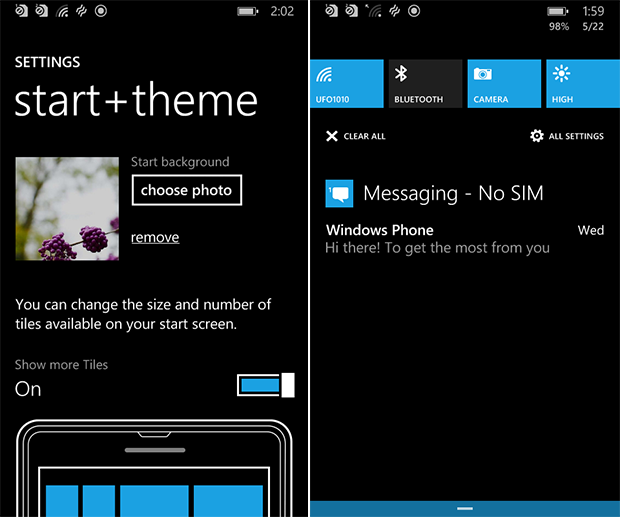 The wallpaper doesn’t change the black or white background of the home screen, but some tiles will become transparent and show the wallpaper instead of solid colors. You can also change the color of navigation bar as Windows Phone 8.1 brings on screen keys instead of regular touch LED keys.

Windows Phone 8.1 also adds the highly anticipated notifications and actions center, pulling from the top of screen not only shows the snippets of messages, emails and other notifications but there are 4 (in some devices 5) configurable toggles. A tiny settings button is also present, so now users don’t have to scroll down to settings tile every time and WiFi, Bluetooth and screen brightness can be changed with quick toggles. 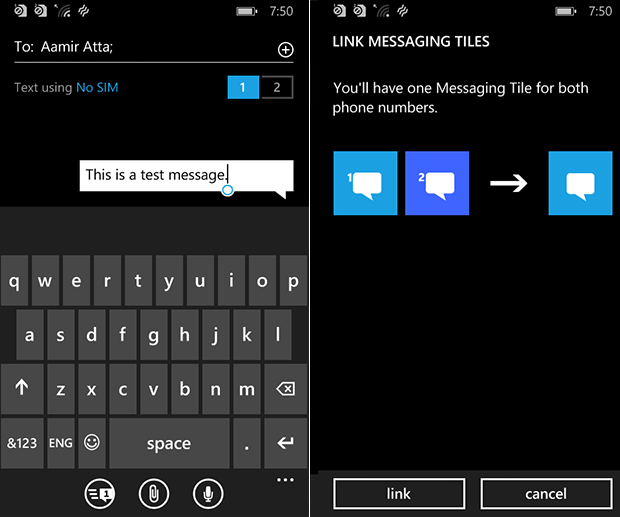 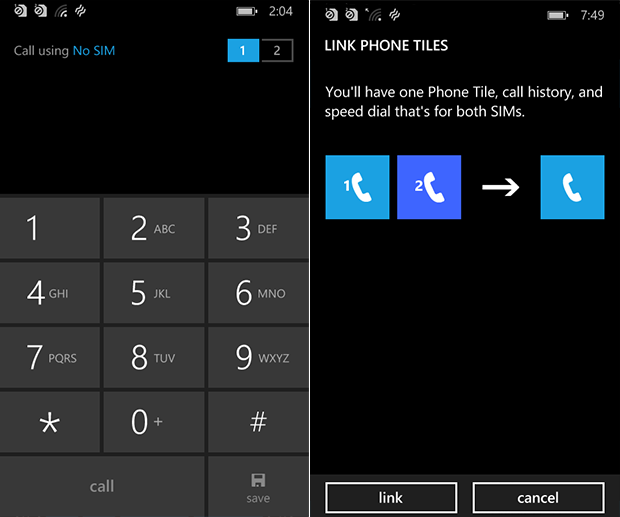 Another big feature is the Cortana, personal assistant; which is the Microsoft version of Apple Siri and Google Now. Not only it answers your queries but also shows you relevant stuff based on your personal choice. Cortana can also recognize the music playing near by, but it is currently in beta and you can access it only if you have selected the language and region to United States. 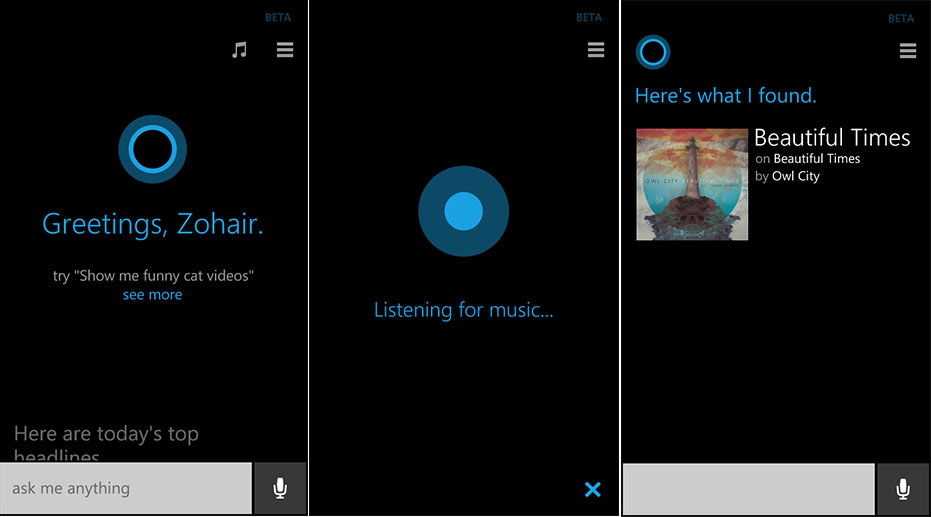 The app store on Windows phone is getting bigger and better everyday and you can find most of your favourite applications and games there, moreover most of them are now free, same as their counterparts on Android & iOS.

Lumia 630 features a 5-megapixel auto-focus camera, with no LED flash light and the front camera is also missing. As mentioned earlier it is a rare Lumia device, which doesn’t have a dedicated camera key. Nokia has decided to take away these features to reduce the manufacturing costs.

However the Camera performance and image quality is actually very good. The camera struggles to capture detail in high contrast scenes and the reds aren’t really red but the low light performance is quite amazing. Despite the fact this camera lacks a flash light it manages to capture decent shots in poor lighting conditions.

The phone has both stock camera application and the Nokia Camera app, we prefer the later as it gives you more control over image taking process and you can customize the white balance, focus, ISO, shutter speed and exposure. 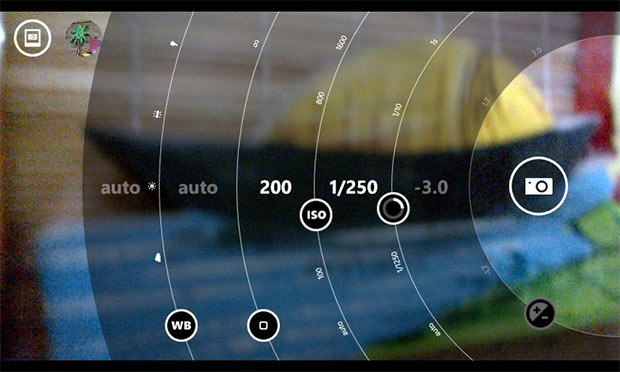 You can also download lenses (other Nokia applications) to enhance the functionality of Camera, like panorama shots, animated photos and the ability to refocus after a shot is taken.

Lumia 630 is also capable of recording 720p videos at 30 frames per second. The quality of video and sound isn’t very pleasing as there is a lot of noise even in good lighting conditions, but I would not have expected otherwise. One thing I’ve noticed that the zooming function is very smooth, it is little slow but better than most of the mobile phone cameras.

Have a look at the sample video below:

The lack of front facing camera could be a deal breaker, but Nokia has recently replace the Selfie app “Glam Me” with “Lumia Selfie”. This new application now lets you take selfies with the primary camera, and once your face is in the center it beeps to let your know. However you can’t do video calling without a front facing camera.

Lumia 630 uses a 1830mAh removable battery, which doesn’t seem so good on paper, but the real life performance is very much acceptable. 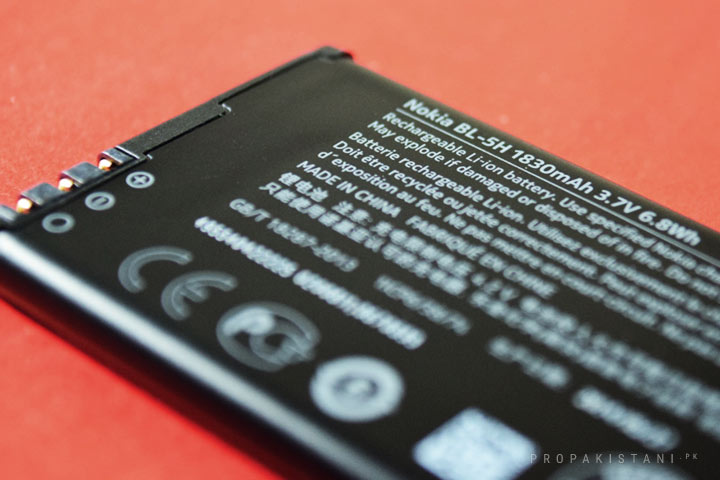 As per company claims the battery can last for 25 days on stand up and you’ll easily get a single day usage on 2G network, which is almost true.

With a careful usage you can extend the battery life to a couple of days, however watching videos or playing resource hungry games can drain the battery with in 5-6 hours only.

Lumia 630 Dual SIM is available across Pakistan at a price of Rs. 16,800 with one year local warranty. Currently this phone is sold in 5 colors; orange, green, yellow, white and black.

Lumia 630 is good deal for those looking for a budget device, it has a nice and fresh design. The build quality is excellent and despite the fact that its a plastic phone, Lumia 630 actually looks and feels very pleasant in hand.

The screen has a rather low resolution, but the size seems to be just perfect for everyone and you can easily carry this device with you. It also lacks the front facing camera, but the primary camera does the job very well. 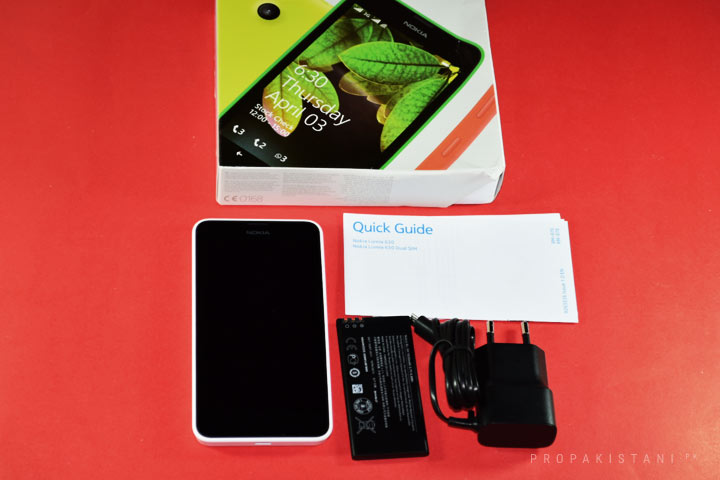 Most of the budget smartphone users demand the dual-SIM functionality and they want a lag free experience, fortunately Windows Phone 8.1 gives you both. Moreover the Windows Phone store is growing fast, so you can stop worrying about availability of essential apps on the app store.

However in this price range their are many alternates to choose from, but for Nokia and Windows Phone fans, Lumia 630 is definitely the best device to get.

Do share your opinion about this phone in the comments section below, and if you have any questions feel free to ask.