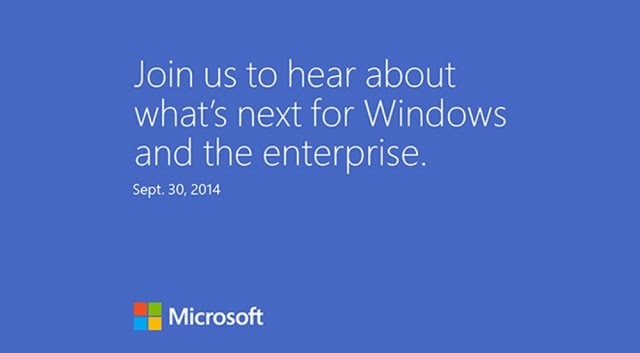 Microsoft is on its way to announce the next version of Windows (possibly Windows 9 or merely “Windows”) on the last day of the month, September 30.

The press invites currently only feature the tagline: “Join us to hear about what’s next for Windows and the enterprise”.

Microsoft is expected to put further light in the future versions of Windows (codenamed Threshold), and maybe even release a Technical Preview. We can also expect to see Windows 9 Server, judging by the word “enterprise”.

We already have some solid reasons to believe Windows’ future is coming given the wide number of leaks over the past two months or so. The most-intriguing (and important) is the inevitable return of Start Menu, which will now allow users to pin Metro-style apps on itself.

Microsoft will also allow these apps to either run windowed or fullscreen. It may kill the seldom used Charms menu and officially introduce virtual desktops. It is also expected to add Notification Center and Interactive Live Tiles.

Another intriguing feature is unification of Windows and Windows Phone. Recently, we saw a leak of a Windows Phone with only “Windows” written at the back. Windows 9 may be the final version of Windows, with the future updates expected to follow a one-click procedure, similar to OS X.

Finally, Microsoft’s answer to Siri and Google Now, the virtual-assistant Cortana (which famously made all the correct predictions in the 2014 FIFA World Cup) will be making its way to the flagship product of Redmond. We understand that the changes introduced in Windows Phone 8 update make porting between the two OSes easier, and Cortana might be the supreme example of this.

This news doesn’t mean that you should throw your copy of Windows 8 away anytime soon, though as the final version can take years to reach the market.