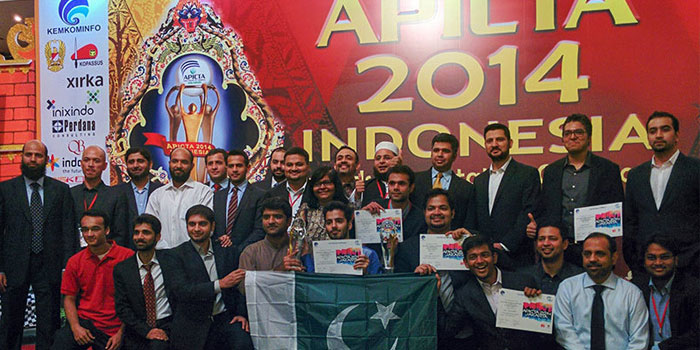 Team Pakistan won 2 Gold Awards and 3 Silver Awards at the Asia Pacific ICT Awards (APICTA) 2014 ceremony held in Jakarta, Indonesia yesterday. The event was actually supposed to be held in Islamabad but for unknown reasons, that did not happen.

Leading the way with the Gold were the teams from Eyedeus Labs for their new product “Ingrain” and Syed Osama Maruf of NUST for his product “Smart Steth”. The Silver Awards were taken by RemoteInterview.io in the Startup Category, EatOye in the Tourism & Hospitality Category and Fawad Ejaz Bhatti of NUST for TRex Tremor Reader in the Tertiary Student Category.

The Awards ceremony was attended by Mr. Rudiantara – the Minister of Communications & IT of Republic of Indonesia.

This year’s Pakistan delegation comprised of 30 members with 19 technology products competing for the prestigious APICTA Awards.

National teams from each economy are selected after a rigorous ICT Awards competition in 17 economies. The best of the best then compete against each other at a three day regional event judged by industry professionals, technology veterans and thought leaders from the APAC region. The Pakistani delegation was finalized after the announcement of winners at the PASHA ICT Awards earlier in November.

International APICTA Judges from 17 economies who evaluated the categories in which Pakistan participated spoke about the consistently high standard of technology products presented by Pakistan year after year. This year Team Pakistan benchmarked its products against 183 products from the region.

Over the years the Asia Pacific ICT Awards has become a platform for the best technology companies in the Asia Pacific to meet and form potential partnerships with each other and attract business and possible investment.

It is heartening to note that it was young technologists who led the way this year proving that Pakistan has enormous talent and that the technology industry has a brilliant future.

Eyedeus Labs is a startup developing Computer Vision technologies for smartphones. Ingrain is their second product – it is a Platform for targeted native advertisement in videos.

Product: Smart Steth
Category: Tertiary Student Category
Dubbed as a portable doctor, Smart Steth will be able to help a trained health worker in early detection of pneumonia as well as in its treatment.

An end to end remote hiring solution, from scheduling and filtering, pre-screening to hiring for the greatest technical talent in the world. It saves 10x the cost of recruiting a technical hire and amongst its beta users organizations like Twitter and Salesforce.com.

Category: Tertiary Student Category
It is the world’s first standalone tremor quantifier. It is a small, wearable, ergonomic, aesthetic, low cost and low power device that quantifies the tremors of a patient and is characterized by state-of-the-art sensors and wireless technology, a proprietary algorithm and a purpose built mobile application.