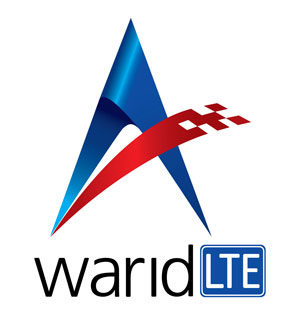 After offering free LTE trials for over a month, Warid has now officially announced the launch of its LTE services in Pakistan.

Warid has said that all customers will be given a free LTE trial for 7 days after the commercial launch, after which Rs. 5/MB will be charged for all data transactions.

Warid users can expect some handy data bundles for LTE services in days to come.

Warid has notified its LTE customers about the end of unlimited LTE trials. Customers were sent SMS messages, automated calls and emails notifying them about the end of trials and the tariffs for data transactions. 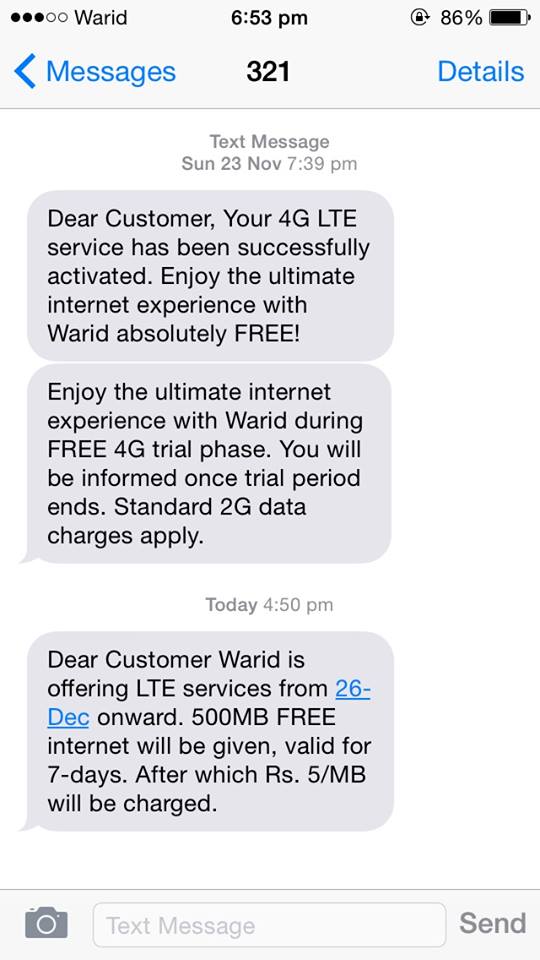 After starting LTE trials for corporate and postpaid users in November, company had announced free unlimited trials for prepaid users earlier in December.

Not to be mentioned, Ericsson — a market leader for wireless data traffic all around the world — is Warid’s sole technology partner in Pakistan for the rollout of the LTE network.

To ensure that the company continues to offer its users the most advanced technologies, Warid will be investing around US$500 million over the next five years to expand its network across the country.

“Over the years, Warid Telecom has developed a reputation for breaking new ground in Pakistan’s mobile landscape. We have always remained at the forefront of innovation: our decision to transform directly from 2G to LTE technology is a reflection of this spirit of innovation.

With this move, Warid becomes the first mobile operator in Pakistan to transform directly from 2G to LTE technology.

Moving forward to 2015 and beyond, we will continue to invest in premium technologies and network infrastructure to ensure service excellence to our patrons who have always held us close to their hearts.

I am confident that with the trust and loyalty by our customers, Warid Telecom will rise to stellar heights within this new telecoms paradigm.”

As mentioned above, the base rate for Warid LTE services is Rs. 5 per MB. This rate will apply if there’s no data bundle added for your number. But naturally, this is expensive and you will tend to add data bundles available for prepaid and postpaid users. Keep reading to know the details:

Dial *777# for LTE menu to subscribe to any package and check your internet balance.

Warid has managed to cover well the areas in major cities of Pakistan. As we told you before, Lahore is pretty much covered and strongest hold for LTE services from Warid. Same is the case with other cities and coverage is only bound to get better with time.

You can go ahead and see coverage map yourself: http://www.waridtel.com/lte/coverage-map

It merits mentioning here that Warid has partnered with various smartphone brands for procurement of 4G LTE handsets in the country. Company also entered into an agreement with Daraz to offer 4G compatible handsets for online purchasing.

Warid has also setup its online handset portal where you can find number of deals available with various handsets. Here’s the link: http://www.waridtel.com/lte/lte-handset-portal/handset-deals/smartphone-deals

Below is the official press release for Warid’s 4G launch:

Warid has always taken great pride on putting its consumers first; to this end, the company has always focused on introducing innovative and creative services to its customers.

The company’s focus on exceptional services has brought it great acclaim for amazing customer care, exceptional network quality, transparency, and innovation in products and services.

With the introduction of 4G services in Pakistan, Warid has maintained its position as the leading innovator by launching LTE technology in the country. This makes Warid Telecom Pakistan’s first operator to transform from 2G to LTE technology.

To ensure that the company continues to offer its users the most advanced technologies, Warid is investing around US$500 million over the next five years to expand its network across the country.

Warid has a reputation for using only the very best of telecoms technologies; continuing in this tradition, Warid has selected Ericsson, the world leader in LTE/wireless broadband technology, as its sole technology partner for the rollout of its LTE network.