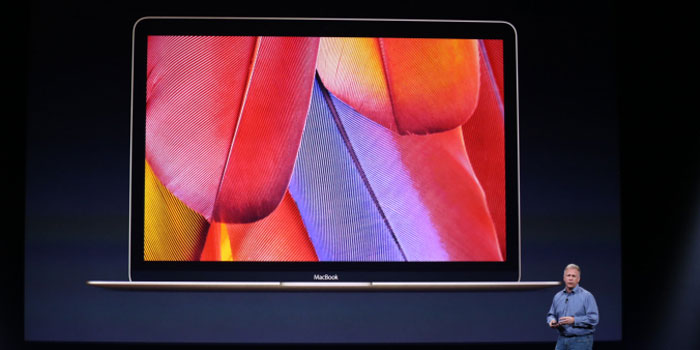 The Macbook Air set the standard for ultraportable laptops when it first debuted. And it was widely acclaimed for its superior battery life, a feature which has most other hardware manufacturers still playing catch up.

And today at the Spring Forward event, Apple outdid themselves again by delivering the most innovative Macbook Air ever, with a slew of new features and hardware refreshes. Lets take a look at what has changed in the 2015 edition of the Macbook Air, the lightest ultraportable from Cupertino yet.

Oh and its called just the Macbook now, shedding the ‘Air’ label. It weighs just under 2 pounds and is 24 percent lighter than the previous iteration of the 11 inch Macbook Air.

A new Keyboard and Touchpad Experience

The new keyboard comes with individually lit LED keys courtesy of what Apple is calling the ‘butterfly mechanism’ for smoother and precise typing experience. And the touchpad, it no longer feels clickable. Instead, Apple has introduced something new – four force sensors that can calculate how much force you apply on the trackpad.

In a QuickTime demo, it was demonstrated that the higher the pressure you applied on the touchpad, the faster the video played. All this when the mouse cursor was over the play button on QuickTime media player. Apple is calling this the Force Click (cue the Star Wars jokes).

The new Macbook crams a 2304 x 1440 resolution display this time around and what’s more, its impressive that the new display panel consumes 30% less power as well. This comes as a boon for video editors and multimedia artists.

That’s correct. There are no annoying fan noises on this little machine, thanks to Apple’s hardware engineers and the Intel Core M Broadwell CPU. The laptop can last through nine hours of web browsing or if you are a multimedia junkie, 10 hours of continuous movie playback.

Its available in space gray and silver plus a new gold color option. The base configuration starts at $1,299 and the laptops will ship out from April 10 onwards.