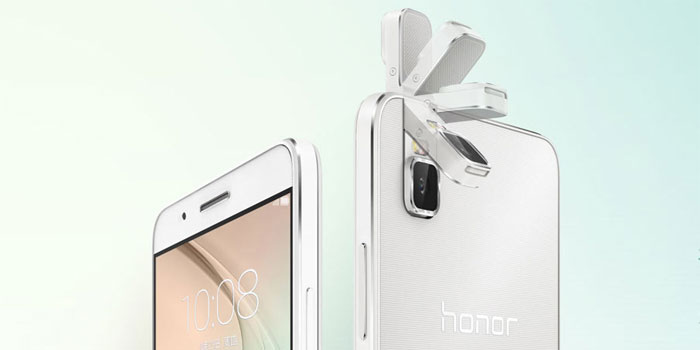 Swiveling cameras in phones isn’t anything remotely new. Years back, it was Samsung which featured a smartphone with the cool feature, and possibly one of the first selfie-shooters. Years later, Oppo took the concept to heart, and used it in its N1 smartphone and its “Mini” sibling.

Now, it is Huawei’s turn to do the same. Its latest Honor 7i smartphone comes with a single 13 megapixel camera with f/2.0 aperture and 28mm wide-angle lens, found in the top left of the phone.

The quirkiness doesn’t end there. Other than the unique sapphire lens, the Honor 7i is also among the first phones to come with a fingerprint scanner on the side of the phone.

The display is a 5.2” panel, though, it does come with 1080p resolution. Under the hood, you get an octa-core 64-bit Qualcomm Snapdragon 616 chipset, alongside 3 GB RAM and 16/32 GB storage. It can expanded further via the second SIM slot, which doubles as the microSD holder.

NFC, LTE and Bluetooth LE boost connectivity. Honor 7i is available in Black, White or Gold. Pricing starts at $250 for the base model. Hopefully the phone will make it to international markets. Either way, it is a very potent smartphone which dares to do something new. 10/10 to Huawei for thinking big.