Today, the Pakistan Software House Association ([email protected]) held its Award Ceremony at the Pearl Continental Hotel in Lahore to recognize technological and entrepreneurial talent in the country.

Though formed in 1993, [email protected] has been regularly holding their annual awards ceremonies to recognize national talent in the technological space for only the past 12 years. The event this year was sponsored primarily by PITB, with DPL, Systems Limited, Infotech, and Telenor Apps acting as secondary sponsors.

A few participants at the event are even going to partake in the APICTA Awards later this year, which recognizes technological prowess in the Asia Pacific Region. As for the ceremony itself, there stood two primary awards categories: Product and Service.

The judges for the event were Zafar Khan, Salman Hamdani, and Badar Khushnood. Dr Shoaib Khan and Jawwad Farid were not able to make the event; however, all five spent valuable time mentoring the teams and judging their products/services for the Awards Ceremony.

There were three major addresses by Jehan Ara, Syed Ahmed and Umar Saif at the event. The highlights of the speeches are shared at the end of the page for your perusal.

Here is the list of winners in the various categories at the event. 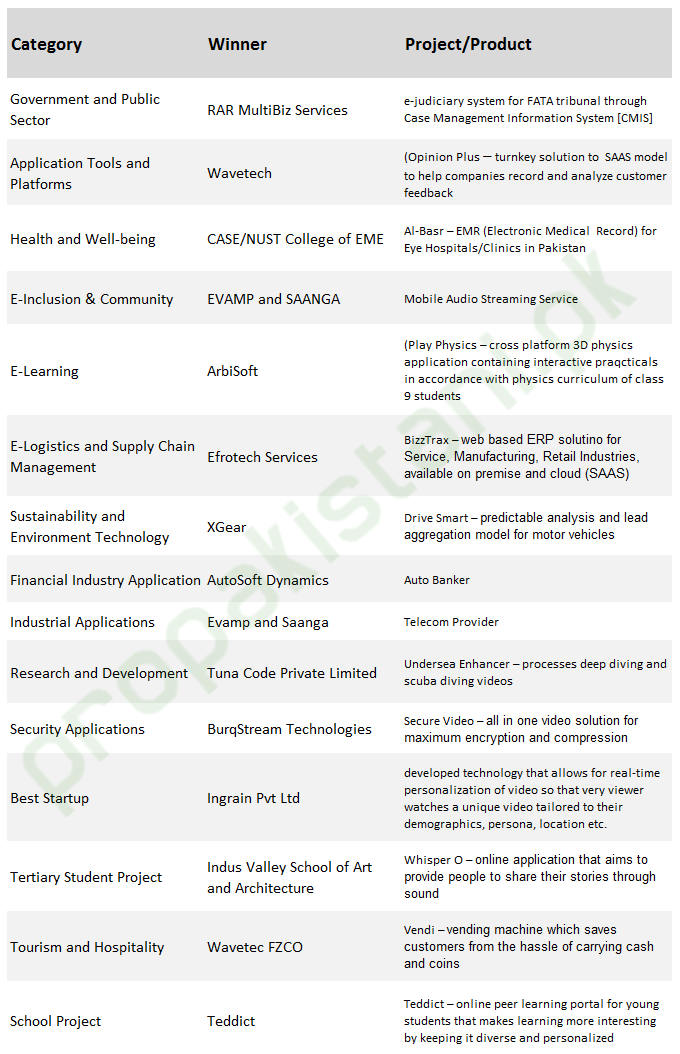 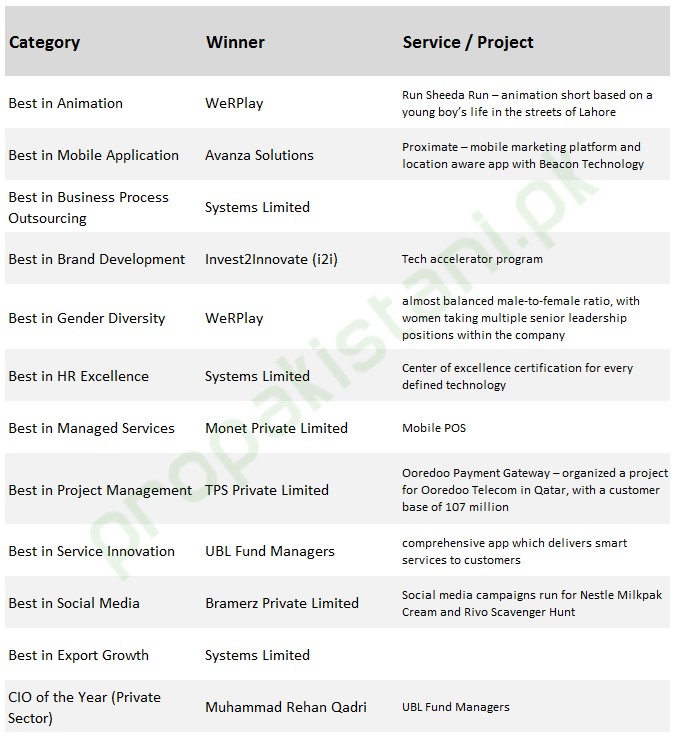 President of [email protected], Jehan Ara, made the opening remarks of the ceremony. She stated that [email protected] had been conducting awards ceremonies to recognize talent in the country for the past 12 years.

She explained the immense difficulty [email protected] was facing when it initially launched in the country.

There was a lot of skepticism among those in the existing software industry who felt that we were not only inadequately equipped to compete against other startups in Asia, but were also not ready to consolidate the current technological and startup ecosystem in Pakistan.

It is on this premise that Jehan Ara feels that the purpose of [email protected] was not just limited to encouraging competition and innovation in the technological space in Pakistan, but to put Pakistan’s name on the map for technological prowess.

[email protected] spends a month training companies in Pakistan to pitch themselves to investors at international events, namely APICTA (Asia Pacific) where they can showcase their product or service, and set a precedent for the auspicious emerging talent in Pakistan.

Afterwards, CEO and Founder of DPL who also serves at the Chairman of [email protected], Syed Ahmed, delivered a speech, in which he praised the startup community in Pakistan for taking part in such events and to seek out initiatives to better their services and the ecosystem as a whole.

Syed noted that there lies a hindrance and an opportunity in Pakistan’s fast-growing lower end working age population. He said that Startup and IT ecosystem help create jobs for this demographic.

We need less government regulation in a plethora of industries and more autonomy to the internet space, to give way for more startups so the economy can improve.

However, Syed noted optimism in speech by promising the technology community support to ward off unjustified tax by the government and by establishing a support service for member services through legal exculpation.

“Pakistan’s IT industry is probably the most celebrated, yet unheard of story”‘ remarked Umar Saif, head of the PITB, during his address, which followed Syed’s. Umar noted the boldness in the Punjab government in partaking in Pakistan’s untapped potential in the startup system.

Umar said that 85 startups have graduated from PITB’s programs over the past three years, with a few receiving handsome investments from foreign VC firms.

PITB’s incubator’s and accelerator’s success has lead to more private incubation centres being set up, which he feels will “perform very well and contribute ever so highly to the startup space” due to their indifference to political policies in shaping and grooming startups to receive more investment.

He noted an ever disruptive discrepancy of information that has led to a halt in companies’ growth.

If you were to ask 5 people about the level of remittance Pakistan receives for software exports, you’d get five different answers.

He feels the participants in the Awards Ceremony have come a long way under the expertise and resources provided by an ecosystem he feels will receive heavy investment in the near future.

He promised the startup community an organization to be formed later this year that will offer Enterprise Certification. After Umar completed his speech, the awards ceremony ensued.