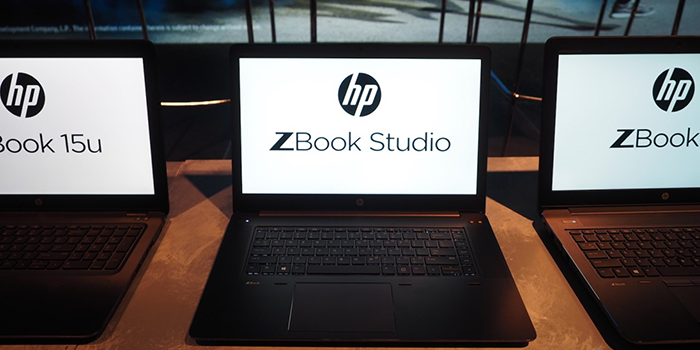 If you thought the MacBook Pros were the supreme kind of portable gadgets, you’ll love to hear that there is a new king in town called the HP ZBook Studio. Hewlett Packard recently split to two branches, one being the Hewlett Packard Enterprise Division and the other one being HP Inc. Since the split last week, this is the first update to the ZBook line that HP Inc. has released.

HP ZBook Studio is more closely matched against the MacBook Pro in terms of design and dimensions. The ZBook Studio is a mobile workstation and it makes no compromises when it comes to the specifications. As far as ultrabooks go, ZBook is the first one to feature quad-core processors from the Intel Core i7 Skylake line-up or the Intel Xeon server line-up. Clear from the choices, the ZBook makes no compromises when it comes to the processing units and can compete with servers and desktops alike. There’s also a choice for installing 32GB of ECC RAM. Hard disk storage tops out at 2TB, double of what the best MacBook or the Microsoft Surface 4 offers.

The ultrabook has some pretty good options in terms of graphics and you wouldn’t have any trouble running the latest games on it. Of course there is plenty of oomph for video editing as well. ZBook allows users to choose from the NVidia Quadro M1000M 2GB DRR5 graphics card, Intel HD Graphics 530 or an Intel Iris Pro Graph.

The 15.6-inch display on the HP ZBook Studio comes with a 1080p display. Pixel Peepers also get the option to customise the screen and get themselves a 4K screen on the ZBook. The ultrabook supports Thunderbolt 3 port and can be connected to a dock. Physical dimensions come close to the requisites of an ultrabook and the ZBook Studio measures just 1.8cm thin and weighs just 1.9KG. Pricing for the beastly ZBook Studio starts at $1,699 while the Thunderbolt dock will go for $229 when the ultrabook goes on sale next month.

HP also took the wraps off its updated ZBook 15u, 15 G3 and 17 G3 ultrabooks. 15u is amongst the affordable ones in the entire and line-up and comes with a 1080p screen, coupled with up to 32GB ECC RAM and 1.5TB storage options. It also comes with the optional Pro-grade AMD FirePro graphics card.

The ZBook 15 G3 and ZBook 17 G3 can be fitted with an Intel Core or Xeon processors like the Studio. Both of them support eye-popping 64 gigs of RAM. The 17-inch version can hold up to 4TB of data while the 15-inch version has a 3TB hard drive. Similar to the Studio, both G3s can come with DreamColour UHD or FHD touch screen displays. If that’s not enough to shock you, the new generations of ZBooks support up to 67 percent longer battery life. Pricing for the ZBook 15 and 17 G3s is yet to be revealed, but expect official word to drop before the January release date.