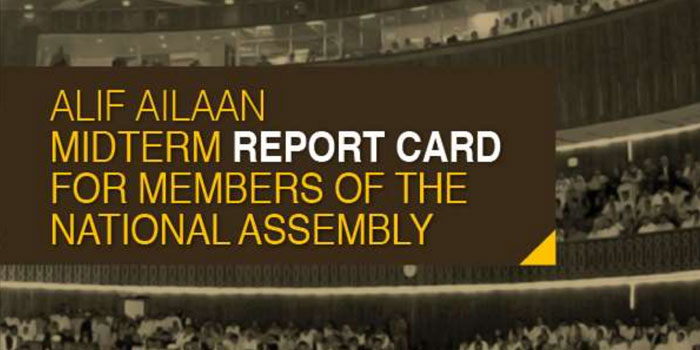 On November 11, 2015, Pakistan’s four provincial assemblies and the National Assembly reached the midterm mark in their tenure. The Alif Ailaan campaign has tried to gauge every MNA
and MPA through the performance of their respective constituencies since the 2013 elections
against four indicators for education and awarded grades in each category, as well as an overall
grade to each MNA, each MPA, and the assemblies. The grades do not reflect the state of
education in a given constituency, but rather the demonstrable change in each constituency
since the 2013 election.

What Are The MNAs Graded On?

The four indicators on which MNAs have been graded are:

Highlights of the Midterm Report Card for MNAs

The report card for the National Assembly shows that across the entire population of 272
elected MNAs, only three MNAs score an A and can lay claim to constituencies where there is
evidence of real overall progress since the 2013 general election. All other MNAs score either a
B or a C grade, depending on their performance on each of the four indicators we have
explored. The overall grade for the National Assembly is a C.

School facilities: In the provision of school facilities, there were only four A+ grades, all of
which belonged to South Punjab’s MNAs. Another 32 MNAs received an A grade, of which 13
belong to the Punjab, with Shahid Khaqan Abbasi of Rawalpindi and Khurram Dastgir Khan of
Gujranwala among the cabinet members who did well. Among the low performers, there were 7
E grades awarded, none of which belonged to the Punjab. As ever, this shows that Punjab
enjoys the benefits of relatively higher investments in school infrastructure. Among the notable
examples of low performers in school facilities were former Chief Minister Akram Durrani of the
JUI-F and former Prime Minister Zafarullah Khan Jamali of the PML-N both receiving E grades.

Retention rates: In retention rates, of the eight A+ grades awarded, none went to any MNA
from Punjab or Balochistan. Retention is a complex metric and tends to be a measure of not
only school quality but also a range of exogenous factors such as availability of private schools,
and overall enrolment rates. Nevertheless, it is a useful comprehensive indicator of children
staying in school. Among prominent MNAs that received an A+ are Swat’s Murad Saeed of PTI,
and Karachi’s Ali Raza Abidi of MQM. Among the lower performers, JUI-F’s leader Maulana
Fazlur Rehman of D.I. Khan and Federal Minister for Education Baligh ur Rehman from
Bhawalpur both receive a D.

Gender parity: The Punjab and Khyber Pakhtunkhwa perform quite well in gender parity, with
all four A+ grades belonging to central Punjab, and a large number of the thirty-three As also
going to Punjab. Balochistan’s Mehmood Achakzai of PkMAP, Aftab Sherpao of QWP, and
Federal Minister for Health, Saira Afzal Tarar all represent prominent recipients of an A grade.
Khyber Pakhtunkhwa also distinguishes itself by having no entries among the E grade
recipients, whilst Sindh fares poorly with both of Thatta’s and Tharparkar’s MNAs receiving E
grades.

Student-teacher ratio: Finally, the grades in student teacher ratio reflect, to an extent, the
challenges of diversity across the country with many high population density areas performing
poorly and many less densely populated areas performing well. This trend is bucked by four
MNAs from Karachi, all of whom receive an A grade. Still, student-teacher ratio is clearly a
challenge in the Punjab, where all twenty-four D grades, and all eleven E grades were rewarded
to MNAs in the Punjab.