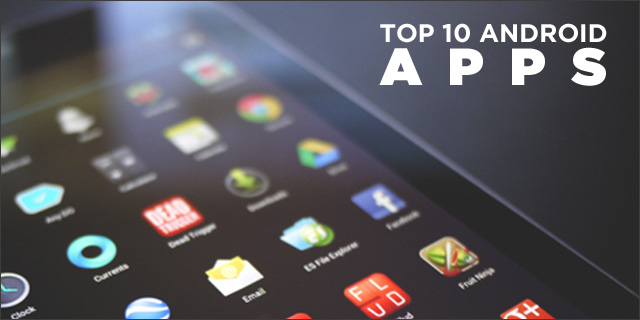 Google has traditionally celebrated the end of the year by highlighting the year’s top apps and games. The collection of highlighted apps are featured from all of the different categories listed on the Play Store. While there are a lot of apps that Google chose to show off this year, we have condensed them into an Android Top 10 apps of 2015 promotion which aims to cover every category from the entertainment section to top productivity tools.

Photos is an all-in-one app for your pictures and videos. Google Photos has come a long way since its developer team split from the Google Plus team. The app features a picture and video gallery, a picture and video editing tool, and an online multimedia backup utility.

Photos offers unlimited cloud storage space for pictures with up to 16MP resolution and 1080p videos, a nifty feature to have in a gallery app since storage space limits are a huge issue on smartphones. Editing videos and photos with the app is pretty simple and you can even apply filters and share your photos on different social networks. The most unique feature is the built-in machine learning algorithm that scans the photos and lets you search your photos using basic info without having to tag each one of them.

The app can be downloaded from here.

There have been an almost unlimited number of messaging apps on app stores but one of them has stood apart throughout 2015. That app is Telegram, which became popular due to its encryption features for secure messaging.

Telegram uses end-to-end encryption, meaning not even Telegram servers can make use of the data that’s being transmitted. Users even get the choice of encrypting their media or saving it on their phones like regular apps. It’s not just privacy though. Telegram is one of the fastest, feature-rich, reliable and best-looking apps (even WhatsApp copied Telegram’s looks) out there. All conversations and media are stored on encrypted cloud storage and synced across multiple platforms which include Android phones, iPhones, Desktops and more.

The best thing is, it’s absolutely free. No yearly subscriptions and no ads. It can be downloaded from here.

Strange as it may be, the selfie culture has brought apps like Retrica amongst the most installed apps on the Play Store. When it comes to simple and instant photo sharing, Retrica is at the top.

The app lets users try out “near infinite” number of live filters, layouts and editing options aside from being able to take photos and share them from within the app. The camera app has built-integrated support for Instagram, Facebook and other social services. Editing options include live filters and layouts visible at the time of photo capture and a lot of post capture creative edits.

The app can be downloaded from this page.

Zedge has been around since the pre-smartphone era when phone users went to the Zedge website and download their favourite wallpapers, ringtones and themes for free.

Zedge now offers officials apps for Smartphones and is the most downloaded customization app on Play Store. Other than the vast catalogue of wallpapers and ringtones, the app now offers app icons for supported launchers, automatic wallpaper selection, favourites, widgets for wallpaper selection and some limited edition personalisation options depending on global events.

Zedge can be downloaded from here.

Dubsmash smashed all popularity records and is one of the most used apps in the subcontinent region.

People use it to create funny videos by selecting a famous dialogue, song or sound and recording their own video over it. Once done, the video is ready to share with friends. It is great for videos going viral.

The app can be downloaded from here.

Nova Launcher has maintained its spot as the king of launchers on Android. Nova has been around since Gingerbread days offering unmatched customization options and a lag-free experience even on weakest of devices.

Nova Launcher offers Material Design UI even if your phone’s OEM doesn’t. It is the go-to launcher for many and definitely a must who don’t like the lack of app drawers on Chinese Android smartphones. Nova offers overwhelming number of customizations options for tinkerers. Once set up, it can improve usability. If you want customizations, you have to get Nova.

Nova Launcher can be downloaded for free here. The app also comes with a paid Prime license version too, which enables further support for gestures and additional features.

TouchPal Keyboard, another app from the pre-iPhone era, makes a comeback this year. TouchPal has often faced tough competition from SwiftKey Keyboard but managed to beat it by a small margin this year. Though, both apps are amongst Google’s list of highlighted apps of the year.

TouchPal can learn from your previous messages and offer shockingly correct contextual predictions and auto-correct words not just limited to the English language. TouchPal supports Urdu in both, Roman and Persian scriptures. The keyboard offers several free and paid themes and even lets users set their own keyboard backgrounds. There’s a wide support for Emoji’s and Emoticons as well. Once you learn the basics, typing on touchscreens will definitely become a breeze.

Truecaller offers caller ID information for your smartphone. Its app offers a caller ID feature, providing users with the name and profile picture of anyone who calls automatically. Even if you don’t have a user name and number, Truecaller will try and retrieve as much information as it can from its vast contacts list database.

Truecaller has over 100 million users who also help the service provider in blocking spam calls and messages automatically. Marketing calls are automatically rejected while the app also gives its users an option to block any contacts they want.

Microsoft Office has been available for Android for quite a long time but this time Microsoft decided to split Office components and improve their functionality significantly.

While Office for Android was good enough for viewing documents, it was nothing special when it came to document editing. The new Microsoft Word for Android, has changed that. It has a lot more options and is much closer to the desktop version of Word or the Google Docs for Android version in terms of productivity and functionality. The familiar look improves usability on both smartphones and tablets. Complete Word experience is also available with an Office 365 subscription.

Word can be downloaded from this page.

Ginger Keyboard is the surprise entry this year, reaching top apps of the year in very little time. While it may look strange that we have included two keyboard apps in our Top 10 list, it’s because there is very high demand for quality keyboard apps, since typing on touchscreens isn’t as natural as a doing it on a physical keyboard. Google included 4 apps in Top apps of 2015 list and Ginger Keyboard was one of them.

It offers almost all the features that other keyboard apps offer like Emoji support, a vast variety of keyboard themes, predictive text, support for a lot of languages and swiping input. In addition to these must-have features, Ginger builds upon with support for stickers, built-in GIFs, an optional dock for most used apps. It even has a feature that lets you play games like Snake, Pong, 2048 during idle times and also offers easy to access news section.

Ginger Keyboard’s killer feature is its grammar checker, a first for any keyboard app. While it also offers a spell checker, a grammar and punctuation fixing utility would definitely come in handy for those who would like some assistance with English grammar.

Ginger Keyboard can be downloaded for free here.

So what do you think of our Top 10 apps of 2015? Let us know in the comments section below. For the complete list of Google’s highlighted apps head over here.