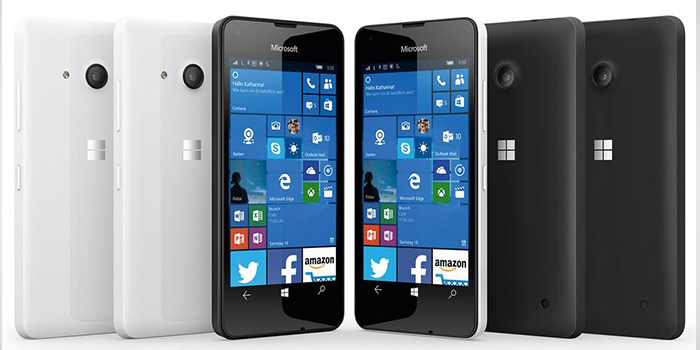 For the budget friendly crowd, Microsoft has a new offering with the Microsoft Lumia 550. For those who were put off by the Lumia 950 or 950 XL’s high price tag, the Lumia 550 will be a welcome alternative.

Starting off, Lumia 550 has a 4.7-inch screen with a resolution of 720p. The chipset present inside the smartphone is Qualcomm’s Snapdragon 210.

Windows 10 Phone on a Budget

The quad-core Cortex-A7 processor won’t deliver the performance levels achieved by chipsets such as Snapdragon 810, or Snapdragon 808, but thanks to a better optimized Windows 10 mobile platform, you can expect smooth sailing from this device. There is a 2,100mAh removable battery present at the rear side, and 1GB of RAM will be sufficient enough to tackle mainstream tasks for the user.

There is also 8GB of internal memory, and best of all, there is support for a microSD card slot that can take the storage limit up to a capacity of 200GB. Naturally, internal memory will not last long if you start installing applications, which is why a high-speed storage card is required to maintain good performance as well as store media and apps.

Lumia 550 has a 5MP rear camera (with a single LED flash) that can also record 720p videos at 30FPS, while a 2MP front camera is present for selfies. Perhaps one of the biggest perks of owning a Lumia 550 is that you will be able to enjoy LTE speeds on it. With a Cat4 LTE modem present inside it (with a maximum downloading speed of 150Mbps), no longer shall you be confined to just 3G connectivity.

As for colors, the new Lumia 550 comes in matte black and glossy white, and will become available globally in select markets starting from today.