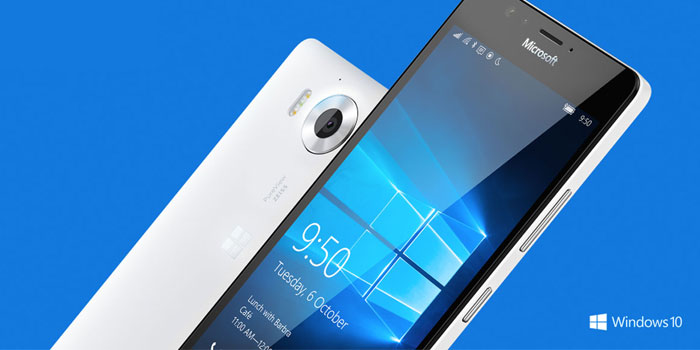 Both Smartphones also feature 3GB of RAM, but are fitted with different chipsets belonging to Qualcomm. Since Qualcomm’s high-end chipsets are known for their overheating issues, Microsoft has incorporated a very clever liquid cooling solution that will prevent the processors inside the chipsets from going above their temperature limits, and this will ensure that performance is not lacking from Lumia 950 XL or Lumia 950.

Both devices also have enough space to accommodate two SIM cards. Additionally, they also have 32GB of on-board storage, and for extra storage expansion, both smartphones can recognize a microSD card with a storage limit of 200GB. There are several similarities between Lumia 950 XL and Lumia 950 as you might have noticed, with the most notable one being the fact that both of them have a 20MP rear camera sensor.

Both phones comes with 20MP cameras capable of 4K video, USB-C ports and over 500 pixels per inch density AMOLED displays

This sensor has a triple LED flash, features a 5th generation optical image stabilization chip and also has the capability to record 4K videos effortlessly at a constant 30 frames per second. To top it all, there is also a dedicated camera button that provides a ‘one click’ image, allowing you to snap a quick-fire of images and selfies.

Unlike several smartphones available in the market, both Lumia 950 XL and Lumia 950 have a USB-C port instead of a microUSB port. The advantage of having this port is that it can transfer data at a speed of 10Gbps. Due to interface and speed limitations of the actual storage present inside the smartphones, you might not be able to witness those data transfer speeds, but they will still be much faster than the speeds delivered by microUSB 2.0.

Lumia 950 XL is going to be powered by a 3,340mAh battery, while Lumia 950 will get its electron juices flowing through a 3,000mAh battery. Given below is the list of all the hardware specifications and pricing details that you need to know about the two Windows 10 powered handsets.