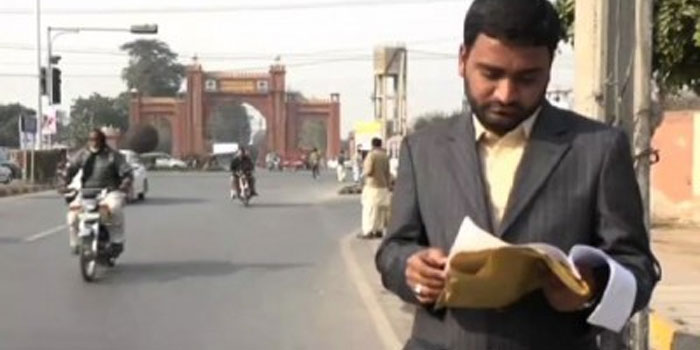 In every independent country, freedom of expression is considered to be one of the basic human rights.

When the Ministry of Information Technology and National Assembly Standing Committee on IT was framing the Cyber bill, serious reservations were registered while quoting clause “Power to manage intelligence and issue directions for removal of blocking of access of any intelligence through any information system”.

According to the critics this clause gives the government/PTA unfettered powers to block access or remove speech not only on the internet but transmitted through any device, through its own determination. Not only does this infringes fundamental rights of citizens and curbs media freedom but has huge implications where privacy is concerned. This clause would allow the authority – and in turn the government – to acquire powers to order media houses’ web platforms to remove any material they deem inappropriate.

Article 19 of The Constitution of Pakistan: Freedom of speech says,

Every citizen shall have the right to freedom of speech and expression, and there shall be freedom of the press, subject to any reasonable restrictions imposed by law in the interest of the glory of Islam or the integrity, security or defence of Pakistan or any part thereof friendly relations with foreign States, public order, decency or morality, or in relation to contempt of court, [commission of] or incitement to an offence.

However, Kashan had not violated any of the above mentioned borders but still faced the music in shape of deprivation from another basic human right of access: education.

In a rare incident, the University of Agriculture of Faislabad expelled one of its gold medalist students who criticized a music event organized by the university in his Facebook post.

Syed Kashan Haider Gilani, a PhD student, received university notice stating that he was being expelled for “defaming the university image” for an act of “indiscipline and misconduct.

The student was expelled for “defaming university image on programs arranged in connection with Kisan Mela 2015, spreading wrong information, misleading student community on social media, showing disrespect to university and its administration, initiating an undesirable/unwanted debate about programs on social media, damaging repute and bringing bad name to university,” according to a notice issued to him. 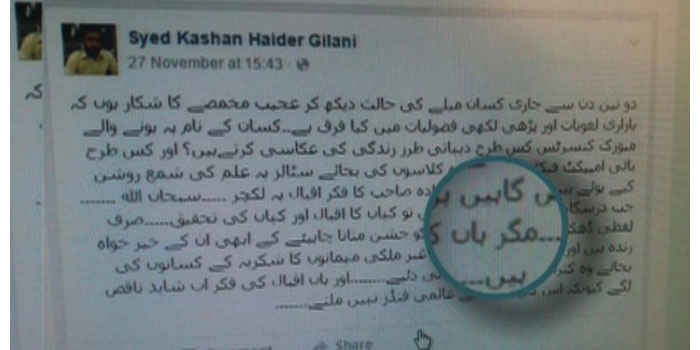 Last week, the student was directed to present his written and verbal explanation before a disciplinary committee that decided about Gilani’s fate.

Following his expulsion, the university has banned Gilani’s entry and directed him to vacate hostel.

Kashan has stated that the university terminated him with immediate effect without issuing him any warning. He expressed hope that the chief minister and courts would provide him justice.

Spokesman of Faisalabad’s University of Agriculture said that the student would be given a right to appeal, adding that decision about the student’s future would be taken on merit.

UPDATE: The University has restored Mr. Gilani as a student on January 7th 2016, following him signing an affidavit not to criticize his alma mater on social media any further.