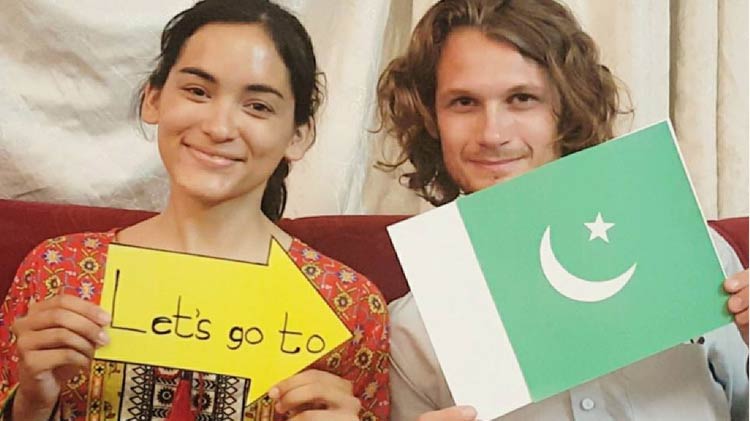 You’d be hard pressed to find anyone who believes foreign media provides a fair picture of Pakistan. The country is filled with amazing people and scenic landscapes yet portrayals are always grim.

To continue our tradition of highlighting positive stories about our country, we bring you an interview Jovago Pakistan did with Alex, an interesting girl from the U.S. She came to Pakistan with her partner Sebasstian who is from Netherlands. This is their story!

I’m a 25 year old girl from the United States. I’m an average human that is addicted to travel, ice cream, and climbing trees. I spent most of my life in the United States but lived in the Netherlands (AKA Holland) for the past 3 years.

Several months ago my Dutch partner and I sold all of our stuff, quit our jobs, and left the Netherlands to go backpacking through Eurasia!

How many countries you have visited so far?

On this trip we’ve traveled to 4 countries so far: Georgia, Armenia, Iran, and Pakistan. In general, I think my current count is around 42 countries.

How do you finance your trips?

A combination of my trust fund and selling my body along the way… just kidding!

I saved money and lived as cheaply as possible for over a year to fund this trip. It meant a lot of beans and rice for dinner (and breakfast and lunch) but it was worth it!

I prioritize travel over any other kind of spending, except maybe food.

3 of my favorite tips would be:

What was the primary reason to visit Pakistan?

Not many people have been traveling to Pakistan in recent years and the less tourists there are, the more adventurous the country feels!

I was interested in visiting a country that I knew so little about, and especially one that’s such an uncommon destination.

What was your perception about Pakistan before your trip?

Whenever Pakistan shows up in the news, it’s always because something was blown up, or there was some other kind of terrorist activity.

When trying to research the country beforehand, all I encountered were warnings about how dangerous the country is, and how I definitely absolutely should NOT travel to Pakistan.

Luckily, I’m always dubious of government warnings, and prefer to come to my own conclusions about a country. I’m glad I did–Pakistan isn’t anything like what the internet makes it out to be!

Can you share your feelings the moment you landed in Pakistan?

Um, does “hot” count as a feeling? I entered Pakistan via Balochistan, at the border with Iran.

It was a very intense couple of days–it was boiling hot, very dusty, and we were escorted by Levies/police/men with big guns for almost one week.

How will you describe your trip to Pakistan in three words?

What makes Pakistan different from countries you have visited so far?

Undoubtedly the people. Traveling as a foreigner in Pakistan, you’re treated like royalty. Everywhere we go, people always help us, feed us, and make sure we’re okay.

Even on Instagram people come forward to offer us help, advice, and host us. I’ve never met so many kind and hospitable people in my life!

Which cities have you visited so far? Which one you liked the most?

Picking a favorite is a bit difficult, but I did find Lahore to be incredible. It’s a rare thing to find big cities with such friendly people!

If you get a chance to visit Pakistan again, which 3 destinations you would like to visit?

Oooh, that’s tough. Probably Peshawar, Chitral, and the costal highway in Balochistan. But I’d really just like to revisit the south of Pakistan in general–it was way too hot to enjoy it when I was there!

What were some of the problems you faced in Pakistan as a foreigner?

The security. As a foreigner, there are many places we aren’t allowed to go without permission, we often need to be escorted by security personnel, and we are sometimes forced to stay in really expensive hotels for “security reasons”.

I know that it’s meant to keep us safe, but it’s very frustrating–people say we need permission, but no one ever tells us where to actually get permission.

I also don’t think it’s logical–if you’re afraid of foreigners being hurt, why force them to stay all together in expensive hotels, a common and easy target, or be accompanied by police when police are attacked more than anyone else?

What will be your answer if anyone asks you, “Why should I visit Pakistan?”

There are loads of reasons to visit Pakistan!

It has historical sites thousands of years old, some of the tallest mountains in the world, and food that is certifiably to die for. But I’d say the most important reason to visit Pakistan is to meet the people of Pakistan, and to give them a chance to prove your stereotypes wrong.

The people are what make this country, and you’ll never get to know them if you never visit!

You must have researched on Pakistan before visiting. What is different in the real Pakistan?

If everything I had found while researching Pakistan was true, I probably would’ve been blown up into a million pieces after being mugged by random people on the street who then handed me over to the Taliban on day one.

The country is, in reality, far safer than any of these warnings claim. I’ve never felt unsafe here.

Out of the different types of cuisines you had in Pakistan, which one was your favorite?

Oof, people always ask me this, and I always have trouble remembering the names of the different dishes… Talha chicken or chicken handi were quite delicious (if I spelled those right), but all of the different fresh fruits in Pakistan might have to be my food of choice! Helloooo mangoes!

Share one of your most memorable moment or incident in/about Pakistan.

We were waiting for a train from Khaipur to Lahore.

We were in a bad mood because the man selling tickets was rude to us, it was a million degrees outside, and we had to wait for three hours. Plus, we couldn’t drink in public because it was Ramadan. In short, we were dying.

Then, a boy came up to us carrying a bag filled with curry, bread, fruit, and several bottles of water.

He told us his mother cooked it for us, as we must have been hungry because of Ramadan. He gave it to us, then walked away. Amazing.

Any ending note for readers?

Don’t let the media scare you, or plant false ideas in your mind. Come to your own conclusions about a country before judging it! And do consider coming to Pakistan.

It’s an incredible country where anything is possible, and I promise you: you won’t regret it.

We hope to see Alex coming back again to Pakistan!

If you want to know more about Alex and Sebastian do follow their blog www.lostwithpurpose.com.

Reproduced with permission from Jovago Pakistan