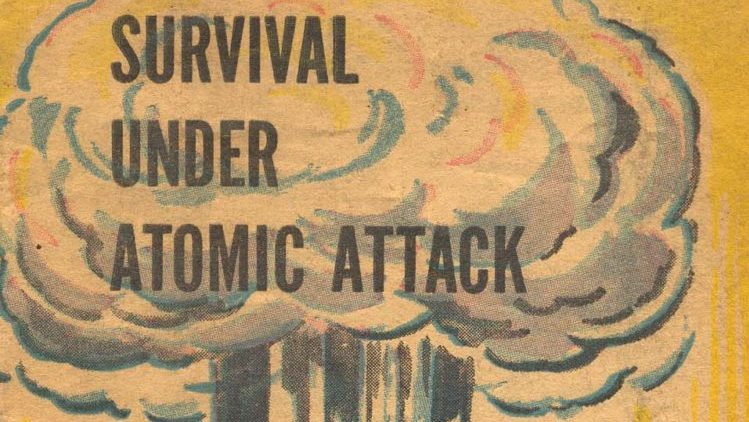 Things between Pakistan and India are heating up as tensions over Kashmir continue to rise. Our neighbor has been amping up its silos and rallying its offensive forces at the borders. Pakistani army has said that its ready for any misadventure.

Some analysts are even predicting a small scale war between the two countries and Indian media has been actively supporting the government to launch a full scale war against Pakistan.

If this were to happen, considering that both countries are nuclear powers, it could result in deaths of millions of innocent people as well as setting the region behind decades.

Most people, from both sides of the border, will agree that a war is not a solution and will only result in loss of lives and economic turmoil in the region. Both sides will gain nothing from it. While we would prefer the matter to be resolved diplomatically, this doesn’t mean that Pakistan should not respond if Indian forces aggravate the situation in any form or method.

In case that an all-out war does begin, use of nuclear assets could become a reality. Small sized tactical nuclear weapons at the least.

Hopefully it wont come to that, but just in case, we are going to guide you on how you can save yourself in case of a nuclear attack.

So before we tell you on how to plan to survive a nuclear hit, here are few things to understand:

For a 15 Kilotons of nuclear detonation, anything with-in 2 kilometers will be evaporated due to blast effects. Severe damage can be done for another two kilomters (4 in total), while moderate damage (third degree burns) can be done with-in first 10 kilometers of the ground zero (point of penetration). 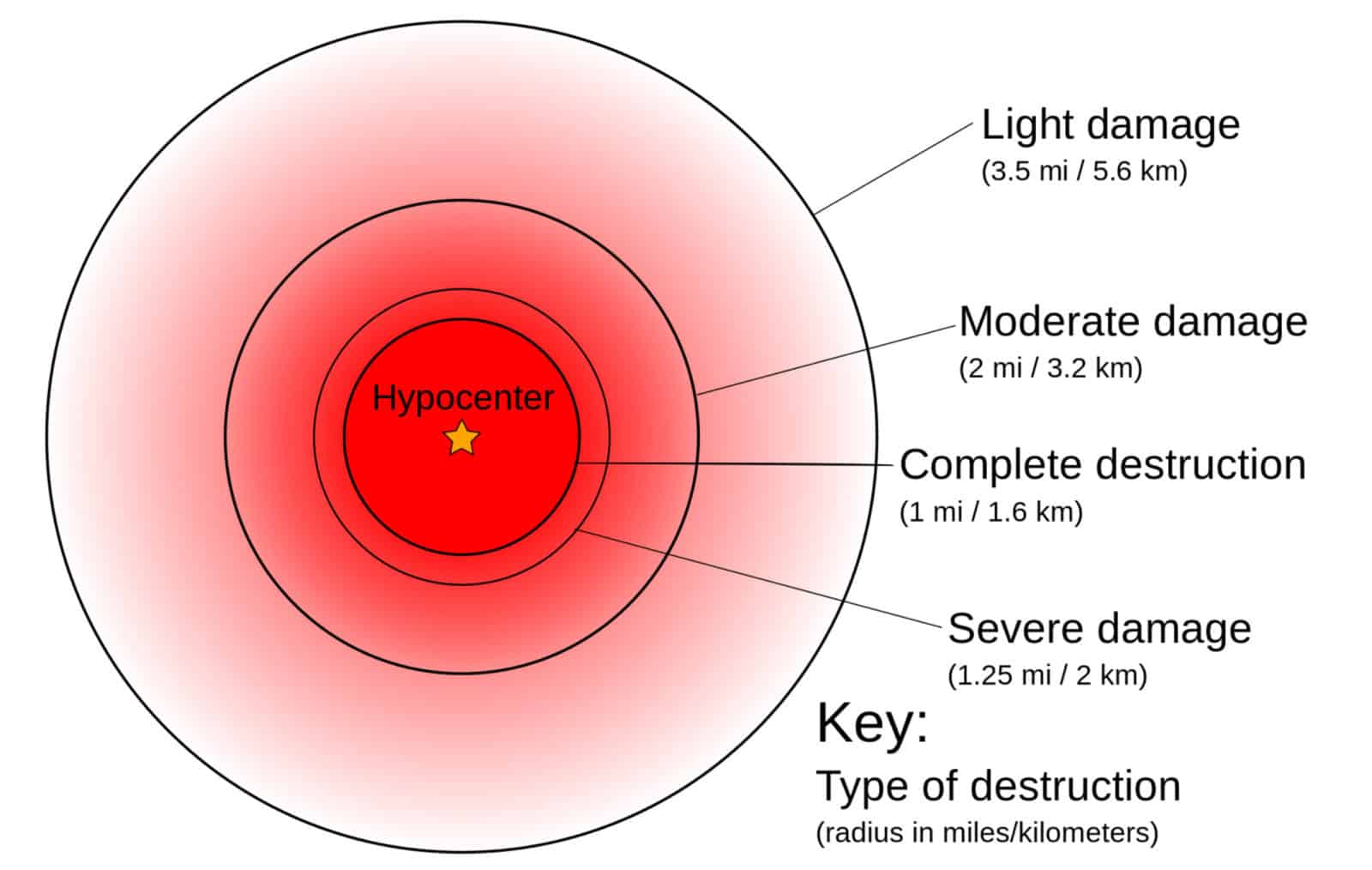 Fallout Effects of a Nuclear Explosion

So if you are with-in 4 kilomters — of a 15 Kiloton atomic hit — then its pretty serious damage and chances of survival are very little, unless you are treated immediately or you are fully prepared for the hit.

Here it is necessary to mention that there are two kind of damages a nuclear bomb can do:

As mentioned above, first 4 kilomters of a 15 kiloton nuclear weapon will come under blast effect. Then there’s radiation effect, that can span through wider areas.

Radiations of a nuclear bomb can travel several kilomters, but that depend on how big the detonation was, the actual height of detonation and the direction of prevailing wind in the area at the specific time.

While the radioactive particles fade away after 9 days of nuclear hit, they keep travelling in air for some time until they fade away. 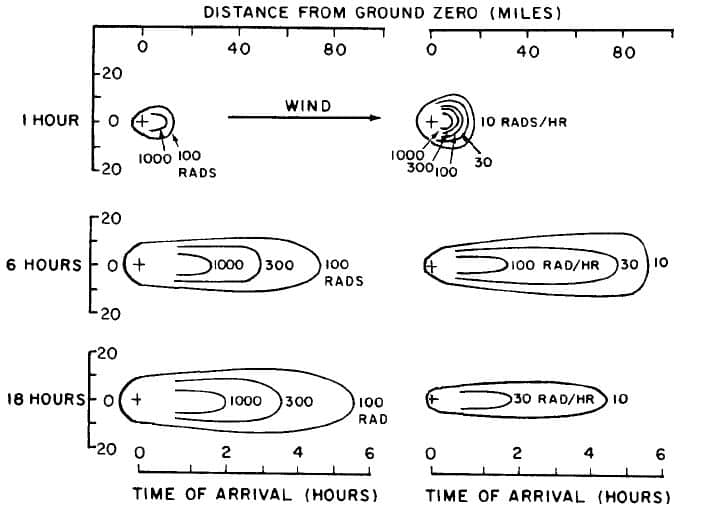 As the graphic show, the radiation fallout of a nuclear shot keeps travelling after a detonation and may cover much wider area during next few days until these radioactive waves are fully depleted.

So theoretically speaking, if you are 10 kilometers away from Ground Zero of a 15 kiloton nuclear explosion, you are pretty much safe.

But its always advise to run away from Ground Zero as far as you can.

When it comes to wars and war zones there’s only one way you can survive and that’s to plan everything in advance. When a war starts, you won’t be able to leave your house which is why you have to be ready beforehand.

Fusion Atomic bombs are fatal for up to 9 days so you might need to plan for that much time, i.e. you will have to stay with-in your bunker / safe placement for weeks.

Of course the radiation will still remain even after first 9 days, but once 9 days are past, you can escape to a shelter outside your city.

Either build a new room underground (in the basement) or convert the most distant room in your house to a fallout room. This room has to be the farthest one from the outside walls. 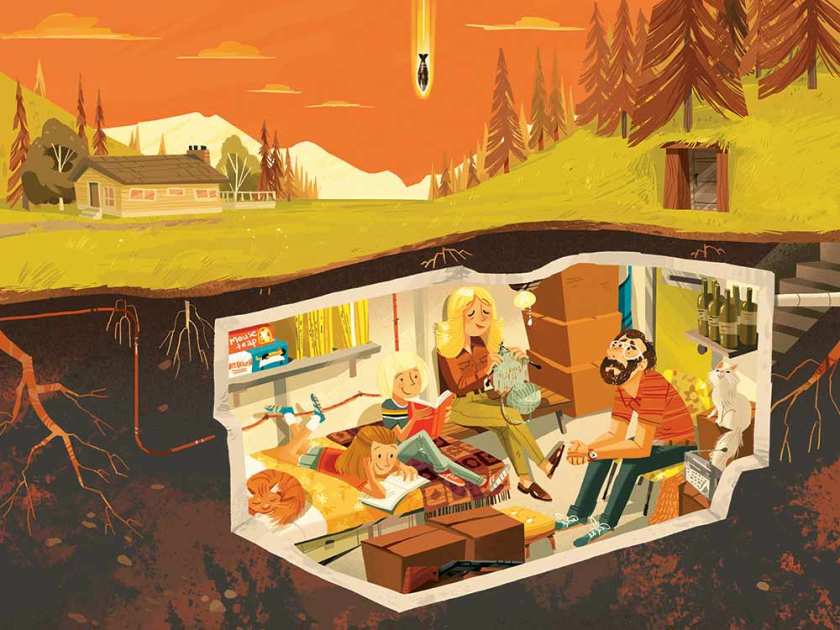 You will need to strengthen the walls as the thicker your walls are the more they can withstand radiation and blast shockwaves. If possible, apply a layer of tin, steel, copper or aluminium to stop the radiation from seeping in.

You will also need to bolt shut any windows and openings while maintaining a source for your oxygen consumption. Something like this could also come in handy during earthquakes.

Also keep in mind to prepare a toilet of sorts. You won’t be able to use water so you will need some disinfectants, cat litter and the like to manage it while you are stuck inside the same room.

Stock Up on Food, Water and Medical Supplies

The first thing you should do is have plenty of supplies in store. War times are pretty tough and you won’t be able to get stuff if something happens.

Store non-perishable food items which can last months if need be. Rice, wheat, sugar, beans, canned food, honey, powdered milk, dry fruits etc. These things won’t spoil with time and you can slowly start stocking until you have a supply for several months.

Same goes for water. You will need food grade plastic containers to store water because water resources become contaminated from nuclear radiation. You’ll have to store water in advance as well.

Medical supplies are also necessary. Who knows when you might need it. Get a first aid kit, your prescription medicines for the next few months and any daily use medicine that could come in handy. Get an instruction booklet as well so you know the basics of first aid.

While inside you will need to know of the surrounding conditions and there possibly won’t be any way to contact the outside world for a few days at least. In any case keep your mobile phone handy and charged. Don’t use it unless you need it and keep a power bank with you as well.

Buy a radio too. Radio updates will keep you informed on the status of the war and any rescue and sheltering camps near you.

Some items you should remember to keep with you at all times are flashlights, batteries, dust masks or any other masks, plastic sheets, tape, bags, some mechanical tools (wrench, pliers etc.)

You should buy some Potassium Iodide tablets as well. These can help against cancer causing radiation from the nuclear blast. But only take these pills after you are sure that there is nuclear radiation in your surroundings.

Keep an Eye on the News

You have to stay up to date so that you know when the political situation gets out of hand. News channels will probably be able to inform of a nuclear strike a few minutes in advance, giving you ample time to hide and save yourself. 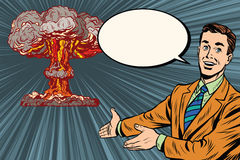 If you do get info of the war in advance, it’s better to leave cities and places close to government buildings and army structures. Third tier, less populated towns are best to be in during a nuclear war.

What to Do When an Attack is Imminent

If you are outside or weren’t able to prepare in advance but still get to know of a nuclear strike, there are still some lifesaving steps to get you through that situation. 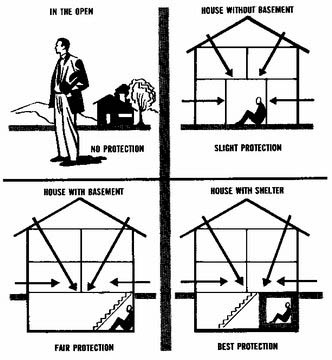 Even if you weren’t informed of a nuclear strike, you will be able to see a bright detonation light a few seconds before an atomic bomb goes off (unless of course you are at ground zero and in that case there’s nowhere to run).

During that time you can find shelter. It can be anything, like a house. You will have to hide inside and shut the doors and windows and lay with your face down. You might still get burned but it could save your life.

If going inside is not an option, start digging or jump to lower ground and lay facing down with as little of your skin out in the open as possible.

Escape if you Survive

If you survive the blast, run away from the blast zone because the debris and radiation can cause death. You’ll have to get inside and lock yourself and get treated as soon as you can or drive away to someplace safe and get treated. Do remember that the enemy can attack again as well so you have be as far away from the battlefields as possible.

If that’s not possible wear as many clothes as you can. And also avoid putting anything on your burns, but do clean them when you get the chance.

Know if You are in Nuclear Fallout

While this is not scientific method and may be risky to try but you can determine if you are with-in a nuclear fallout zone or not. 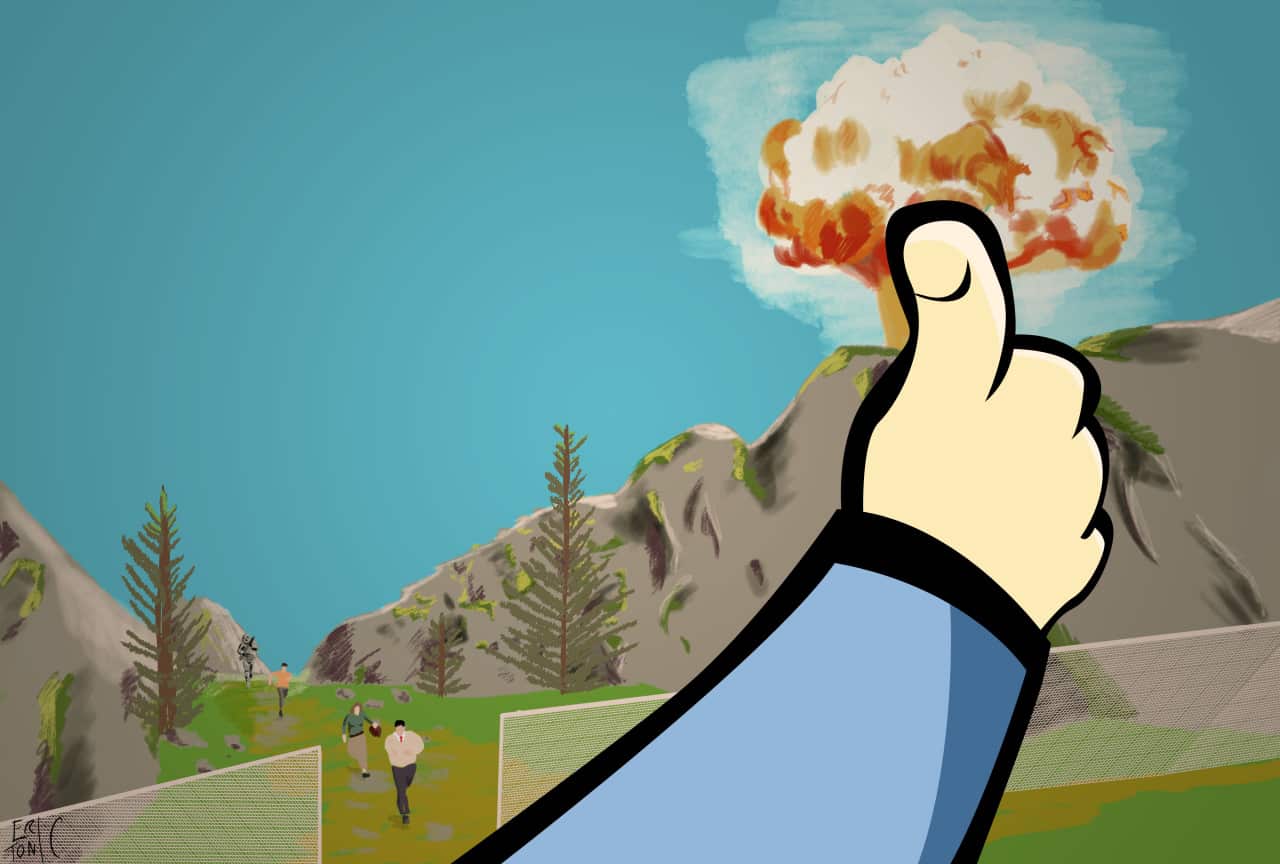 We pray that both countries solve their disputes diplomatically but if worst comes to worse you can make use of these tips to save your and your loved ones’ lives. No matter what happens, help yourselves and help others.