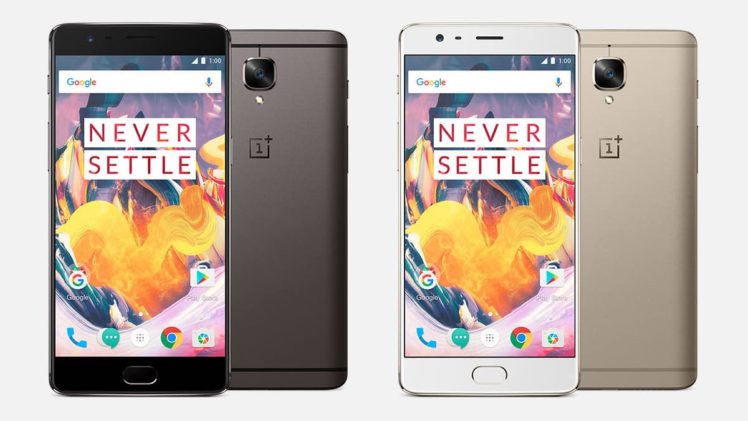 OnePlus 3 was released a few months ago to critically acclaim. Following up on that, the company has released the Oneplus 3T, where the T stands for turbo.

As mentioned earlier, the phone is similar to the original OnePlus 3. This translates into the design as well with the two phones looking exactly the same. It features an all metal unibody design built with aluminium. The front features a home button (capacitive) with two capacitive keys on either side.

The difference here is the color option for the 3T. The slightly darker Gunmetal Grey replaces the Graphite option. The display is also exactly the same with a 5.5 inch 1080p (1920 x 1080) Optic AMOLED screen.

Critics appreciated the screen on the original Oneplus 3 for having very well calibrated colors, deep blacks and great contrast. This is carried over to the Oneplus 3T as well.

The Oneplus 3T has a quad-core Qualcomm Snapdragon 821 (820 in the regular one) clocked at 2.35 GHz. The RAM is still the same at 6 GBs. The Snapdragon 821 is the overclocked (faster) version of the 820. The difference is not much and should not be noticeable at all in everyday usage.

The storage options are limited to 64 GB and 128 GB with no memory card slot available.

The back camera is exactly the same with a 16 MP Sony IMX 298 sensor. This is the same camera sensor used in Xiaomi Mi 5, Oppo R9 and Huawei Mate 8. It can record video at upto 4K (3840 x 2160) resolution with Optical Image Stabilization.

The front camera has been bumped up from 8 MP on the Oneplus 3 to 16 MP on the 3T. The quality difference here is pretty noticeable with the front camera now capturing light better than it previously did, as on the original Oneplus 3.

The battery has also been increased. It is now at 3,400 mAh up from 3,000 in the OnePlus 3. It features the same Dash charging tech which was available in the previous model. It can charge up a dead OnePlus 3 to 60% in just 30 minutes.