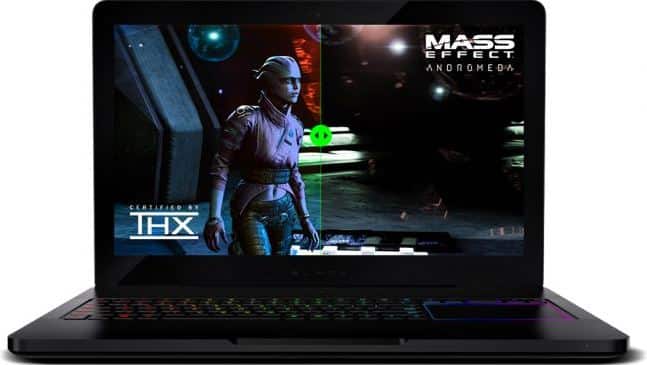 If you wanted a gigantic, premium gaming laptop which still retained the svelte aesthetics we’ve traditionally associated with MacBooks, then you are in luck. The new Razer Blade Pro 2017 takes care of that and much more.

The new 17-inch Blade Pro comes with a 4K UHD display on the front with its IGZO G-Sync panel (supporting 100% RGB gamut), with short-throw mechanical keys (complete with support for Chroma backlight because it’s Razer after all) and a trackpad sitting below, all in a profile under an inch thick.

Nothing about the display and the keyboard has been changed from the last year’s model.

Unsurprisingly, the Blade Pro comes with Nvidia’s GTX 1080 graphics card, which is the best that can be had in a portable right now.

Razer also ensures better audio on both the headphones and built-in speakers for the Blade Pro.

The peripheral-maker company goes on further to tout the video output on the Blade Pro, stating that it is top-notch. The display has been “calibrated and tested for resolution, color accuracy and video playback performance.”

For connectivity, you get a Thunderbolt 3 Type-C connection, 3 USB 3.0 ports, an HDMI 2.0, Killer E2400 Ethernet and an SD card slot. The Blade Pro comes with a 99Wh battery, while for wireless you get Bluetooth 4.1 and Wi-Fi ac.

The battery wasn’t a strong point for last year’s Razer Blade Pro and unfortunately, it’s retained in this year’s version.

The Blade Pro also doesn’t cut corners when it comes to the price, retailing at $3999 and hence charging a $300 premium over its predecessor. It will be available by the end of this month.