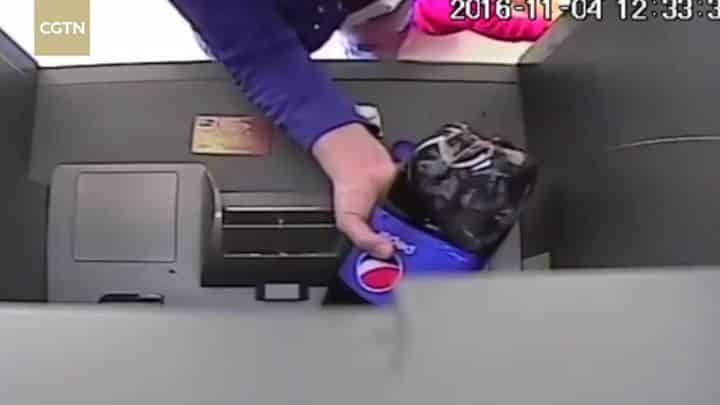 A 33 year old woman from China destroyed an ATM and caused damages of up to $9000. The bizarre part is that she did it through a bottle of Pepsi.

Let’s start at the beginning.

A Tale of a Scam

Last November, a Chinese lady from the Guangxi Province received a call informing her that her personal information might be compromised.

The woman was then advised to transfer $770 to another account so that her account would not be misused further. The person who called her said that it was essential that she did it as soon as possible.

As you might have guessed by now, the caller was a scammer.

That was just the beginning

The next day, the Chinese woman realized that something was amiss. She called back the scammer and told them that she felt uncomfortable regarding the whole situation.

Here’s where it gets truly bizzare. The scammer, realizing that the woman still didn’t know that she had been a target of fraud, decided to have some fun. Upon the woman’s insistence that her money be returned, she was directed ‘to pour cola on the ATM’ to recover the money.

The hapless lady obliged. She got a giant Pepsi bottle and went to the ATM in the hopes that it could solve her issue. And you guessed it right, she poured the cola inside the cash dispensing hole in the ATM.

Here’s how it all went down:

Since fizzy drinks and electronics don’t mix well, the ATM was destroyed. Unsurprisingly, the woman was arrested by the police, who obviously didn’t believe that she was conned into it.

Her act went viral over social media and many people found the humor in the situation:

According to a commentator over at SoraNews24 :

“Boy, they make big bottles of Pepsi in China,” while another pointed out: “Interesting that she chose Pepsi. Whenever I hear ‘cola’ I just assume Coke.”

As of now, the Chinese law enforcement agencies are still trying to determine how much she will have to pay the authorities, It will depend on what the investigation uncovers and with what she’s charged.

The scammers, however, have not been discovered. Given the amount of attention the case has received though, they might just end up regretting their moment of fun.