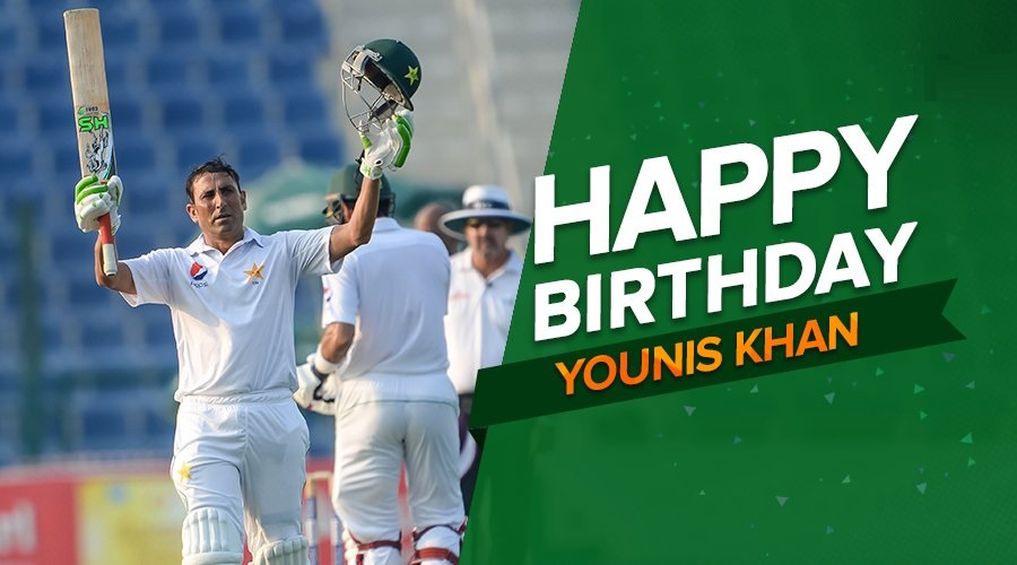 The leading run-scorer for Pakistan in test cricket and the only captain to have won the World T20 for Pakistan, Younis Khan turned 40 on Wednesday. There are countless moments when the ever-smiling Khan made Pakistanis proud.

The only man to have scored a test century in all 11 countries which have hosted a test, Younis Khan is the first and only Pakistani to have crossed the 10,000 runs mark. The list of his achievements is long and we’ve already felt the void created by the legend’s retirement from cricket.

On his 40th birthday, the social media platform Twitter was all praise for the true ambassador of the game. Twitter was swarmed with Younis Khan’s birthday wishes and his countless achievements.

Let’s see what those messages read.

The Home of Cricket reflected on the legend’s numbers.

#OnThisDay Happy Birthday, Younis Khan! Only batsman in Test history with 5 centuries in 4th innings and a century in each country/nation that has hosted Test cricket. #Legend

We would like to wish our mentor Younis Khan a very happy birthday! The 2009 World T20 winning captain holds the record for scoring the most Test runs for Pakistan, the most Test centuries for Pakistan and has made at least a Test hundred in 11 countries. #ZalmiChampions pic.twitter.com/qDVlOKxxOp

Younis Khan only made one Test score in the 90s. #WOW #NoNervous90s

Century in all test-hosting countries – checked.

💯 The only man to score a Test century in all 11 countries.

Asad Shafiq joined the party too.

Happy Birthday to our Champion and one of my mentors Younis Khan! He has always led from the front both on and off the field! Have a great day brother 🎉 pic.twitter.com/ykRZLms8kK

Cricinfo paid tribute to the legend.

He has definitely made everyone proud.

I met Younis Khan first in 1999, his impression then, my first was of a boy aspiring to achieve distinction, organized, methodical disciplined and upright. Later I added loyalty describing him. Happy Birthday YK. You have done us & the country proud. Many happy returns.

No doubt, he is the best.

Happy birthday to one of the most successful & inspirational cricketer Younis Khan. May you enjoy the journey ahead of you and continue to inspire us. #TheBoss pic.twitter.com/vbDuHIMVg0

Younis has earned a lot of respect both on and off the field.

Happy Birthday to One of the Finest Batsman Pakistan ever had!
Prayers and Best wishes for Your life ahead. Live Long and Stay Blessed.#Respect Younis Khan!!@TheRealPCB pic.twitter.com/KC9Smgt9t5

Late last night, Younis celebrated his birthday with some of his friends and colleagues. Images were shared by some of the participants.

Here’s how he celebrated his birthday.

This cake 🍰 specially made for for #YounisKhan on from his friend on his birthday, Fishing 🎣 Rod, Fish 🐟 and 🏏 on it. #HappyBirthday #YK @YounisK75 #cricket #Fishing pic.twitter.com/mbQxRj8Okc

ProPakistani wishes Younis Khan a very happy birthday and a great life ahead.